River landscapes in the UK

TweetDeck. Natural measures must be key to UK flood protection, MPs urge. Natural ways of stopping floods, such as tree planting and putting logs in rivers to slow water flow must be a key part of protecting the nation as climate change intensifies rain storms, according to a report from MPs. 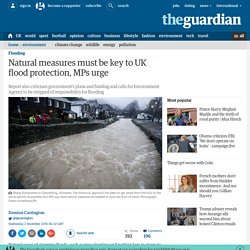 The cross-party committee criticised the government for its limited plans and insufficient funding, and called for the Environment Agency to be stripped of its responsibility for flooding and replaced by a dedicated floods authority and a national flood commissioner, as is the case in the Netherlands. Other measures proposed include paying farmers to store water in fields and forcing housebuilders to make new homes resilient to flooding. More than 5 million people in England are at risk of flooding and recent winters have seen devastating deluges, with storm Desmond alone causing £5bn in damages in the northern UK. 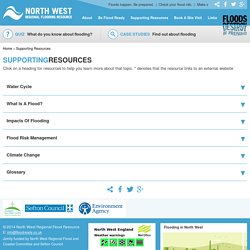 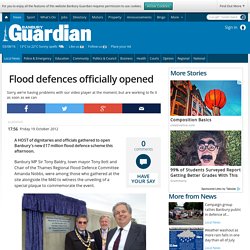 Banbury MP Sir Tony Baldry, town mayor Tony Ilott and Chair of the Thames Regional Flood Defence Committee Amanda Nobbs, were among those who gathered at the site alongside the M40 to witness the unveiling of a special plaque to commemorate the event. Mr Baldry thanked the businesses and organisations who worked on the scheme and added: “If it hadn’t worked at the end of April this year we would have seen very serious flooding in Banbury, there’s no doubt about it.” Banbury £17m flood defences scheme opens. New £17m flood defences set up in an Oxfordshire town after a river burst its banks five years ago will officially open later. 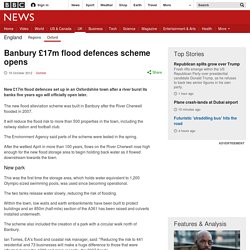 The new flood alleviation scheme was built in Banbury after the River Cherwell flooded in 2007. It will reduce the flood risk to more than 500 properties in the town, including the railway station and football club. The Environment Agency said parts of the scheme were tested in the spring. After the wettest April in more than 100 years, flows on the River Cherwell rose high enough for the new flood storage area to begin holding back water as it flowed downstream towards the town.

This was the first time the storage area, which holds water equivalent to 1,200 Olympic-sized swimming pools, was used since becoming operational. The two tanks release water slowly, reducing the risk of flooding. Within the town, low walls and earth embankments have been built to protect buildings and an 850m (half-mile) section of the A361 has been raised and culverts installed underneath. EA Banbury 2012. 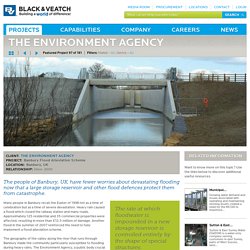 Many people in Banbury recall the Easter of 1998 not as a time of celebration but as a time of severe devastation. The geography of the valley along the river that runs through Banbury made the community particularly susceptible to flooding during heavy rains. The flood alleviation scheme consists of five major elements: 1) a large flood storage reservoir upstream of Banbury, 2) a key highway with raised elevation into the community, 3) new earth embankments, flood walls and pile walls in strategic locations, 4) a new pumping station and 5) a bio-habitat, complete with ponds, trees and hedgerows.

The team worked together to identify ways to reduce costs for the client and overcome challenges.