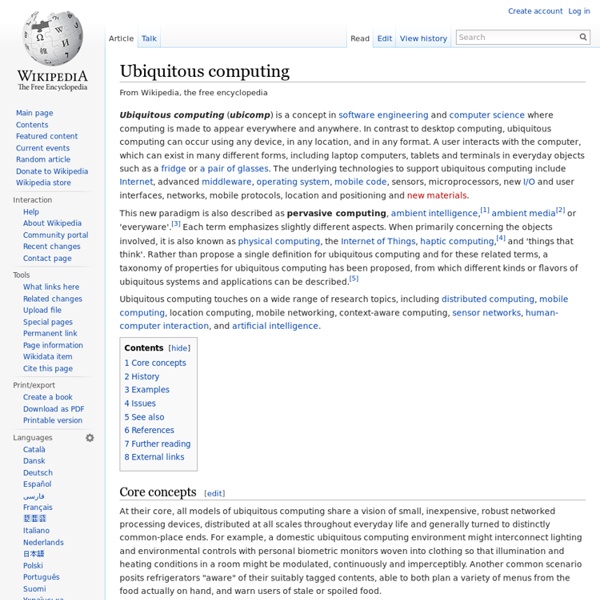 Ubiquitous computing (ubicomp) is a concept in software engineering and computer science where computing is made to appear everywhere and anywhere. In contrast to desktop computing, ubiquitous computing can occur using any device, in any location, and in any format. A user interacts with the computer, which can exist in many different forms, including laptop computers, tablets and terminals in everyday objects such as a fridge or a pair of glasses. The underlying technologies to support ubiquitous computing include Internet, advanced middleware, operating system, mobile code, sensors, microprocessors, new I/O and user interfaces, networks, mobile protocols, location and positioning and new materials. This new paradigm is also described as pervasive computing, ambient intelligence,[1] ambient media[2] or 'everyware'.[3] Each term emphasizes slightly different aspects. Core concepts[edit] Dust: miniaturized devices can be without visual output displays, e.g. Layer 1: task management layer

Five "Free Energy" Devices that Could Save You Thousands of Dollars Image credit: www.flickr.com/photos/cr03/42435041 “Free energy” devices are the most important inventions for helping us solve many of our financial problems. Many of these “free energy” generators have the ability to generate energy at a fraction of the cost of traditional energy generators. Imagine having a “free energy” device in your home that generates enough electricity to power all your appliances and electronic devices for the cost of 10 dollars or less per month. How would that change your financial life?

Automotive lighting The lighting system of a motor vehicle consists of lighting and signalling devices mounted or integrated to various parts of a motor vehicle. These may include the front, sides, rear and, in some cases, the top of the vehicle. The purpose of this system is to provide illumination for the driver. This enables safe vehicle operation after dark and increases the conspicuity of the vehicle. The lighting system allows other drivers and pedestrians to observe the vehicle's presence, position, size, direction of travel, and the driver's intentions regarding direction and speed of travel.

Organic mega flow battery promises breakthrough for renewable energy A team of Harvard scientists and engineers has demonstrated a new type of battery that could fundamentally transform the way electricity is stored on the grid, making power from renewable energy sources such as wind and solar far more economical and reliable. The novel battery technology is reported in a paper published in Nature on January 9. Under the OPEN 2012 program, the Harvard team received funding from the U.S. Department of Energy's Advanced Research Projects Agency-Energy (ARPA-E) to develop the innovative grid-scale battery and plans to work with ARPA-E to catalyze further technological and market breakthroughs over the next several years. The paper reports a metal-free flow battery that relies on the electrochemistry of naturally abundant, inexpensive, small organic (carbon-based) molecules called quinones, which are similar to molecules that store energy in plants and animals. The battery was designed, built, and tested in the laboratory of Michael J.

Photodiode A photodiode is a semiconductor device that converts light into current. The current is generated when photons are absorbed in the photodiode. A small amount of current is also produced when no light is present. Photodiodes may contain optical filters, built-in lenses, and may have large or small surface areas. Photodiodes usually have a slower response time as their surface area increases.

Let's Play NSA! The Hackers Open-Sourcing Top Secret Spy Tools Last August, at Defcon, the hacker conference in As quiet descended over an eager audience of hundreds of hackers, Ossmann stopped and issued a warning. “If you don't want to hear about leaked classified information, you can leave now,” he told the crowd. Ossmann was acknowledging a legal barrier: if you're a government employee, you're prevented by law from reading or hearing about leaked classified information.

RONJA Single high-brightness LED with a cheap loupe lens creates a bright narrow beam that can stream DVD-quality video over neighbourhoods. A few steps aside and the narrow beam becomes invisible. Three bolts preloaded with pink rubber blocks facilitate fine adjustment of the optical head direction with a gear ratio 1:300. The bolt on the right side is a part of a rough adjustment mechanism which allows pointing the optical head in virtually any direction. Artificially enhanced picture of a situation where a Ronja link stops working because of heavy fog

Why technology and content are inseparable at Netflix Neil Hunt is the chief product officer at Netflix, and his job entails a lot more than it might sound like. The end product at Netflix is the video streaming through our iPads or smart televisions, but what we’re watching and we’re seeing it is result of a lot of work. Netflix is well known for the algorithms that recommend content to viewers, for example, but less is known about its resilient cloud computing architecture and the myriad considerations that come along with delivering and pricing new types of video formats.

Related:
Related:  Informatique Ubiquitaire   -  Newer Technology   -  murorulo   -  The Future Of Things | Science and Technology of Tomorrow   -  LOW-TECH MAGAZINE   -  prosthetic knowledge   -  10 Ways the Next 10 Years Are Going To Be Mind-Blowing | High Existence   -  The 80 Best Guerilla Marketing Ideas I’ve Ever Seen   -  Your browser is not supported.   -  The Lifehacker Tech Dictionary   -  The IBM Next 5 in 5: Our 2012 Forecast of Inventions that Will Change the World Within Five Years « A Smarter Planet Blog A Smarter Planet Blog   -  27 Science Fictions That Became Science Facts In 2012   -  Open Innovation & Crowdsourcing Examples   -  This Is the Most Complex Integrated Quantum Circuit Ever Made   -  Social Networking Fact Sheet   -  Influence | Quirky   -  Number of Internet Users (2016)