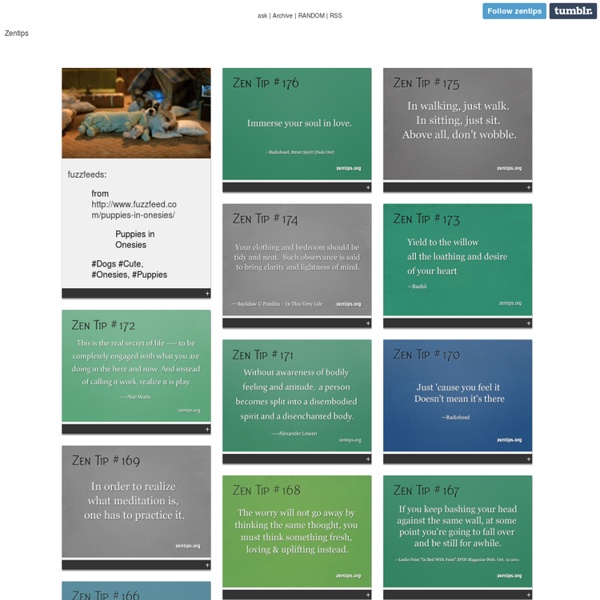 Top 20 Logical Fallacies - The Skeptics' Guide to the Universe Introduction to Argument Structure of a Logical Argument Whether we are consciously aware of it or not, our arguments all follow a certain basic structure. The Dalai Lama’s 18 Rules For Living May 6, 2011 | 42 Comments » | Topics: Life, List At the start of the new millennium the Dalai Lama apparently issued eighteen rules for living. Since word travels slowly in the digital age these have only just reached me. E-Learning Buddhist Studies This section contains education material on all aspects of Buddhism: • Basic Buddhism Guide. • Buddhist Studies for Schools. • Online Study Guide. • Buddhist History & Culture, and • The Buddhist World. Entry level Buddhism: Outlines and Summaries of the Basics Concepts and Teachings. A self-study course on Buddhism based on the Historical Buddha, His Teachings, and Buddhist History & Culture. The material ranges from introductory teachings to advance scriptural and meditation texts.

David The Books of Samuel, 1 Kings, and 1 Chronicles are the only sources of information on David, although the Tel Dan Stele (dated c. 850–835 BC) contains the phrase בית דוד (Beit David), read as "House of David", which most scholars take as confirmation of the existence in the mid-9th century BC of a Judean royal dynasty called the House of David. He is depicted as a righteous king, although not without faults, as well as an acclaimed warrior, musician, and poet, traditionally credited for composing many of the psalms contained in the Book of Psalms. David is central to Jewish, Christian, and Islamic doctrine and culture.

70 Animals Cuteness is usually characterized by some combination of infant-like physical traits, especially small body size with a disproportionately large head, large eyes, and round and softer body features. Infantile personality traits, such as playfulness, fragility, helplessness, curiosity, innocence, affectionate behavior, and a need to be nurtured are also generally considered cute. To those who are living in the concrete jungle, we have collected the following cute animals, hoping they could bring you a good mood and maybe, remind you of the wild world. 28 pieces of computing advice that stand the test of time Technology never stops moving foward. Hardware gets faster, and operating systems gain new features and (we hope) finesse. This is natural computing law. But just because computers are one big exercise in evolutionary progress, that doesn't mean certain computing maxims ever go out of style. Take, for example, the nuggets of wisdom in the following list. All of these things are as true today as they were 2, 5, and in some cases even 10 or 20 years ago.

Self Help Junkie Kristen’s Books “Where does patience end and procrastination begin? Kristen Moeller bares her soul to help us understand the answer. She wants readers to start participating in their lives instead of watching them like a movie. AA calls it showing up. INFJ Profile Introverted iNtuitive Feeling Judging by Joe Butt Profile: INFJ Revision: 3.1 Date of Revision: 8 Aug 2010 Beneath the quiet exterior, INFJs hold deep convictions about the weightier matters of life. Those who are activists -- INFJs gravitate toward such a role -- are there for the cause, not for personal glory or political power. INFJs are champions of the oppressed and downtrodden.

Still Life: Bent Objects UPDATE: The Return of Bent Objects Wires transform these objects from inanimate to hilarious works of art. Little polish girl McDonalds as Sculpture Materials Yeah, this is where those come from Dancing Queens What Is Intelligence, Anyway? What Is Intelligence, Anyway? By Isaac Asimov What is intelligence, anyway? Helping a Depressed Person: Taking Care of Yourself While Supporting a Loved One Helping a depressed friend or family member Depression is a serious but treatable disorder that affects millions of people, from young to old and from all walks of life. It gets in the way of everyday life, causing tremendous pain, hurting not just those suffering from it, but also impacting everyone around them. If someone you love is depressed, you may be experiencing any number of difficult emotions, including helplessness, frustration, anger, fear, guilt, and sadness. These feelings are all normal. It’s not easy dealing with a friend or family member’s depression.