TFOT - The Future Of Things 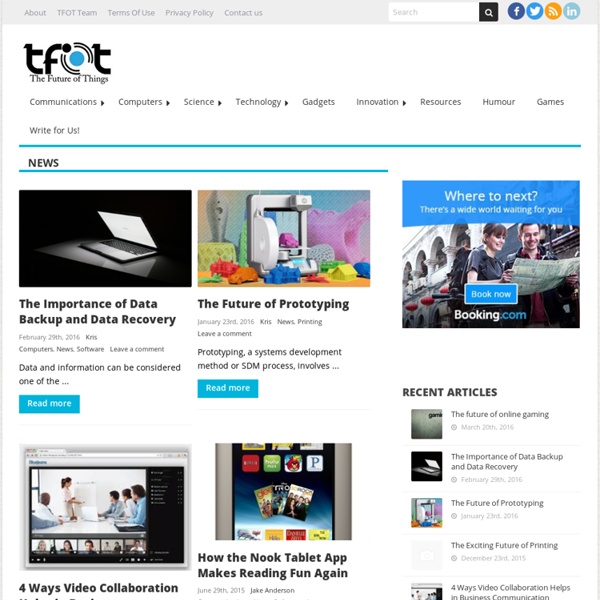 For many reading a book is not a very pleasant task unless the storyline is incredibly ... The present-day CDs and DVDs which help store data, on an average have a lifespan of many ... Foldable flat screen televisions are getting closer to reality as University of Houston ... A lot of people through popular science fiction television shows such as Star Trek have seen ... Bad breath just used to simply mean poor hygiene or a case of the mornings, but as science has ... Drones have been used by the military ever since they were able to make full use of the ...

Public Library of Science: Open Access The Case for Open Access Open Access (OA) stands for unrestricted access and unrestricted reuse. Here’s why that matters. Most publishers own the rights to the articles in their journals. Blue Ball Machine About Blue Ball Machine is a series of YTMND sites illustrating user-generated models of the Rube Goldberg machine, an over-engineered structure designed to perform a very simple task in a very complex fashion, often involving chain reactions. Origin In 2005, the Something Awful forums hosted a contest in which a blue ball machine was to be created.

Can we change the future? A scientific view... I was reading this article from 1998 about quantum theory – I know it’s pretty old…, but there was something about it that struck me! It’s maybe also because I’m reading this book that contains a lot of prescience characteristics or just my open mind. So, I decided to put together all this scientific evidence with one scope – Can we change the future? Do we have an influence on our future? An extract from the article on ScienceDaily (Feb. 27, 1998)

The First Trillionaires Will Make Their Fortunes in Space What's the Big Idea? Just as explorers during the Age of Discovery established new trade routes in pursuit of resources such as gold, silver and spices, the future explorers of space will be chasing unimaginable riches. As Peter Diamandis told the International Space Development Conference, “There are twenty-trillion-dollar checks up there, waiting to be cashed!” These cosmic cash cows are so-called Near-Earth asteroids that contain a wide range of precious resources. Sure, this may sound a lot like the movie Avatar, in which the RDA Corporation mined the mineral unobtanium on the planet of Pandora. But this is no pie-in-the-sky idea.

Accelerating Future There isn’t enough in the world. Not enough wealth to go around, not enough space in cities, not enough medicine, not enough intelligence or wisdom. Not enough genuine fun or excitement. Not enough knowledge. Not enough solutions to global problems. RDF export Based on the user's semantic annotations of articles, Semantic MediaWiki generates machine-readable documents in OWL/RDF format, that can be accessed via Special:ExportRDF. Moreover, there is a maintenance script for automatically generating complete exports of all semantic data. This article explains how annotations are formally interpreted in the OWL ontology language, and how a suitable RDF serialisation is generated. Using the export functionality Users can easily access the generated RDF via the page Special:ExportRDF by entering a list of articles into the input field. The export will contain one OWL/RDF specification with various description blocks for exported elements.

Product Support Forums Hi The Virtuoso SPARQL endpoint has an arbitrary result set limit of 100,000 rows, to protect against excessively large queries being run, as these may deplete resources and lead to performance, stability, and other issues such as you have seen. This is set in the Virtuoso config file, virtuoso.ini: Code: Select all [SPARQL];ExternalQuerySource = 1;ExternalXsltSource = 1ResultSetMaxRows = 100000;DefaultGraph = = 120 ; in seconds;MaxQueryExecutionTime = 10 ; in seconds Is this what you changed to get larger results sets for your dump?

Science and technology research news « Prev | 1 | 2 | 3 | 4 | 5 | 6 | 7 | 8 | 9 | 10 | Next » Detecting corrosion and fatigue during service A new project, CORFAT (Cost effective corrosion and fatigue monitoring for transport products SCP7-GA-2008-218637), looks to develop new monitoring technology based on acoustic emission testing (AT) combined with follow-up NDT (non-destructive testing) to detect defects such as corrosion or cracks in the structure of surface transport products (ships, railway tank cars, road tankers). Projects talks to Andreas Jagenbrein about predictive maintenance and what this means for transport safety. Read more »

free web hosting provider Can you imagine free web hosting service that has 99.9% uptime? Too good to be true? No more! 000webhost.com has made the revolution, forget the stereotype that free hosting is unreliable.. Here is the proof: uptime stats of 20 servers.

Related:
Related:  news   -  Ubiquitous computing - Wikipedia, the free encyclopedia   -  prosthetic knowledge   -  10 Ways the Next 10 Years Are Going To Be Mind-Blowing | High Existence   -  Your browser is not supported.   -  The Lifehacker Tech Dictionary   -  The IBM Next 5 in 5: Our 2012 Forecast of Inventions that Will Change the World Within Five Years « A Smarter Planet Blog A Smarter Planet Blog   -  27 Science Fictions That Became Science Facts In 2012   -  Open Innovation & Crowdsourcing Examples   -  This Is the Most Complex Integrated Quantum Circuit Ever Made   -  Social Networking Fact Sheet   -  Influence | Quirky   -  Number of Internet Users (2016)