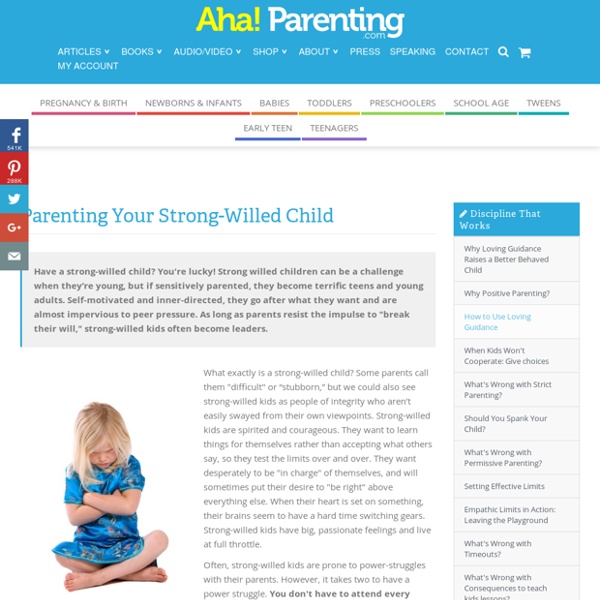 Have a strong-willed child? You're lucky! Strong willed children can be a challenge when they’re young, but if sensitively parented, they become terrific teens and young adults. What exactly is a strong-willed child? Often, strong-willed kids are prone to power-struggles with their parents. No one likes being told what to do, but strong-willed kids find it unbearable. Strong-willed kids aren't just being difficult. Morality is doing what's right, no matter what you're told. So of course you want your child to do what you say. Breaking a child's will leaves him open to the influence of others who often will not serve his highest interests. That said, strong-willed kids can be a handful -- high energy, challenging, persistent. Ten Tips for Positive Parenting Your Strong-Willed, Spirited Child 1. That way, you aren't the bad guy bossing them around, it’s just that "The rule is we use the potty after every meal and snack," or "The schedule is that lights-out is at 8pm. 2. 3. 4. 5. 6. 7. 8. Related:  motivational inspirational

Dragon Track Races Unlike the Colosseum, you can access this event as many times as you want a day. However, it will cost you 50,000 dragoncash each time you participate. There are both common and uncommon elements to the tracks. The common elements are the ones that appear the most, while uncommon elements have an extra element added into the particular track. If you do not own a recommended dragon, use one with at least two elements that match the track (for example the Love Dragon, or the Tree Dragon for Cherry Road). Rewards Rewards are given for first, second and third place winners. The reward can consist of gems, experience, dragoncash, or treats, or a combination of these. If the Perch of Kairos is under construction, the reward may instead be a randomly selected artifact. As of June 27, 2013, the reward process was redesigned to introduce a "Treasure Chest" upon successful completion of a race. After completing a race, a wheel is spun for a reward. Dragon Behaviors Gallery Notes

Start Signing! Why Kids Should Learn Sign Language Baby Sign Language: Alphabet My son, Jonah, came home from preschool one afternoon in a fidgety mood, wiggling his fingers wildly and whispering to himself. I was trying to figure out why he was so restless (Too much sleep? Too little time on the playground?) when he proudly announced that he was practicing a new skill he was learning at school: sign language. It's not news that signing with babies can help them communicate before they can talk, but it's a more recent trend to use sign language with older kids. Giving sign language a try at home shouldn't be too tricky. Why it Helps: It Increases Kids' Vocabulary Studies of preschoolers in Maryland found that those who were introduced to American Sign Language (ASL) words, such as signs for the weather, colors, numbers, and feelings, did better on vocabulary tests than their peers who weren't taught to sign.

The Joyful, Illiterate Kindergartners of Finland Approaching the school’s playground that morning, I watched as an army of 5- and 6-year-old boys patrolled a zigzagging stream behind Niirala Preschool in the city of Kuopio, unfazed by the warm August drizzle. When I clumsily unhinged the steel gate to the school’s playground, the young children didn’t even lift their eyes from the ground; they just kept dragging and pushing their tiny shovels through the mud. At 9:30 a.m., the boys were called to line up for a daily activity called Morning Circle. (The girls were already inside—having chosen to play boardgames indoors.) They trudged across the yard in their rubber boots, pleading with their teachers to play longer—even though they had already been outside for an hour. As they stood in file, I asked them to describe what they’d been doing on the playground. “Making dams,” sang a chorus of three boys. “Nothing else?” “Nothing else,” they confirmed. “Play is a very efficient way of learning for children,” she told me. Timothy D.

MetroDad: The Rules: 25 Life lessons for my daughter My father has never given me any advice. The one time I remember him even trying was when I was 18 and on my way out of the house for the evening. As I recall, he briefly looked up from his newspaper and said, "You know about condoms, right?" End of conversation. Thank you, Obi Wan Kenobi. In all seriousness, it always deeply wounded me that we never had any of those father-son conversations where he would counsel me about life and give me lessons of an admonitory or hortative nature that might provide a road map for how to live my life. Needless to say, ever since my daughter was born, I've been bombarding her with advice on a near-daily basis. My list of lessons that I want to pass down to her is virtually endless and constantly changing but I thought I'd write some of those lessons down here. Some of these lessons are humorous. However, all of them are true... (2) Lennon, not McCartney. (3) Life is too short not to order the fries. (6) Don't worry about being popular. (9) Never cheat.

Homemade Toy Fireflies My gosh, where have I been lately? What month is it? June? We moved from Minnesota to Maryland last summer? Yes. So...here we are in Ellicott City. I had to start the kids in one school in September, and then a few weeks later when we finally closed on a house, had to move them to another school. Then just before Thanksgiving, I lost a friend to cancer. All of this is not to say that I stopped making stuff. So I have a lot of stuff in the works, but here's what I've been dabbling with for the past few weeks: Gold dimensional paint. First, there was a jellyfish. We visited the National Aquarium here in Baltimore, and I fell in love with the moon jellies. And then there was a golden longhorn. Again with the blobby paint to highlight the strange characteristics of this animal. I hear they raise ostriches out in West Texas. With semi-grotesquely realistic birdy legs. I also got on a preppy kick and made this striped whale. And an elephant with gold tusks. Of course.

Childrens Story Posters | Square Inch Design Blog Classic Children’s Stories Vol. 1 Also available without text Related Work / Peter Pan Beauty & the Beast Jack & the Beanstalk Gulliver’s Travels The Little Mermaid Sleeping Beauty Chicken Little The Frog Prince Cinderella The Emperor’s New Clothes Enter your email address to subscribe to my blog and receive notifications of new posts by email. Follow me on Twitter My Tweets Recent Posts © 2014 Sinch Art & Design. ©2013 SInch - All Rights Reserved - Sinch is the intellectual property of Square Inch Design. Suzie's Home Education Ideas: 10 Ways to Support an Interest in Engineering When our son was just sixteen months old, we brought him a little train set. With some help, our son would design and build the train route as he showed a natural curiosity in all things engineering. From the early days of playing with trains and blocks, to now building bridges (from paddle pop sticks) and wiring electrical circuits, our son's love of engineering science is evident. Now that our daughters are starting to show an interest in engineering too, I have been reflecting on how my husband and I have supported our son's learning and how we can do the same for daughters. Here are some of the ways we have supported and encouraged an interest in engineering. A Designated Work Area Every learner needs to have a work space where they can make their ideas come alive. Quality Equipment When our son was four years old, we got him a tool kit with real tools. A Journal One of the best ways to encourage engineering is to have loads of paper available to draw on. A Range of Resources Literature

2 Ingredient Cloud Dough - happy hooligans - flour and baby oil 2 Ingredient Cloud-Dough: the ultimate sensory dough! Cloud dough requires only 2 common household ingredients, and it’s ready in minutes. It smells heavenly, and it’s a delight to run your fingers through! I’m a sucker for a good, homemade sensory play recipe, and this flour and baby oil Cloud dough is something I’ve been waiting all winter to make! What is Cloud Dough? Cloud dough (also known as moon dough or moon sand) is silky and mold-able and takes just two ingredients to make. Since first writing this post, I’ve also come up with a coloured cloud dough recipe and a toddler-safe cloud dough for little ones who still put everything in their mouths. You’re going to love how easy Cloud Dough is to make: For your convenience, I’ve included Amazon Affiliate links in this post. Cloud Dough Recipe: Add one cup of baby oil to 8 cups of flour. Transfer your dough to a bin or basin (I purchased this kitty litter box at the dollar store, and it’s perfect for sensory activities), and that’s it.