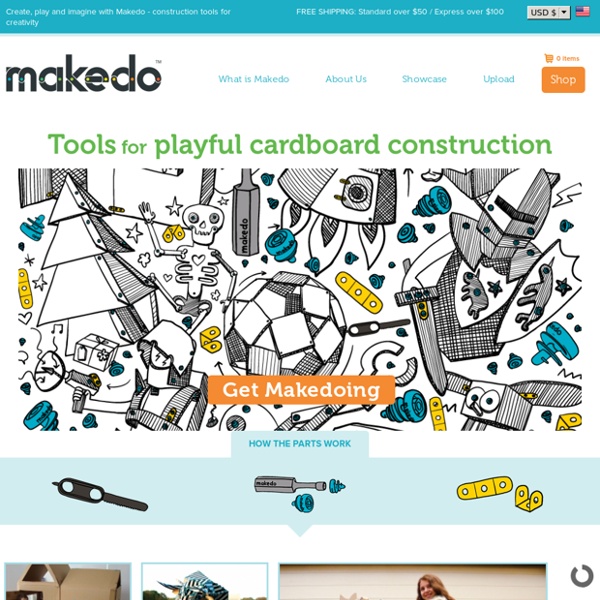 Soil moisture-sensing by hacking a solar light Contributors: Sarah Al-Mutlaq Share Use this URL to share: Share on Twitter Share on Facebook Share on Google+ In this tutorial, we are going to take a simple solar powered pathway light from a department store and rewire it to be a soil moisture sensor. The finished design will turn on an LED when the soil dries up.

Constructing Modern Knowledge Constructing Modern Knowledge is back for a 8h year, July 7-10, 2015 in Manchester, NH. Four Days of Action Constructing Modern Knowledge is not a conference. The majority of time will be spent working alone or collaboratively on projects with your computer, high tech gizmos and traditional materials while supported by some of the best educators on the planet. Amazing Guest Speakers Including wearable computing pioneer Leah Buechley, MacArthur Genius Deborah Meier, & learning theorist Edith Ackermann STEM - Lower School Technology Educate to Innovate and the National Video Game Challenge are all White House STEM initiatives The acronym STEM stands for Science, Technology, Engineering, and Mathematics.

Wind Power: Creating a Wind Generator The lesson presented here focuses on the engineering design process and its use in identifying a question (solving a problem), developing a design or change in design, testing that design, observing and collecting data, analyzing the data recorded from the experiment, and forming a conclusion to perform another round of design. In this case, we are attempting to maximize the voltage obtained from a wind-driven turbine through the use of several experimental designs. You may want to review the following multimedia presentations to learn more about STEM and the engineering design process. What is STEM Education What is Engineering Instructions for creating a wind-powered electrical generator

Recasting Teachers and Students as Designers By Melanie Kahl Designers are privileged to work within a fascinating collision of fields at a time when the conversation could not be more pertinent. The intersection of design and education is ripe for exploration –– its metaphors, roles, spaces, and philosophies. Mobile Learning Playground 2015 - ISTE Mobile Learning Network Join us for interactive fun in Philly! Engage-Learn-Play! Interactive Presentations and Table Topics Presentation Station 1 Making Your Smart Devices Smarter: Gadgets Soda Bottle Rocket LED Fireworks Originating in China, fireworks have been around since before the 16th Century and have been making people look to the night sky with delight. Firework formulas are closely guarded secrets handed down from generation to generation and the overall concept has not changed much over the centuries. Mix chemicals compounds, place them in a delivery device, light a fuse, and watch the fun. That was until now of course. At Soldering Sunday we wondered if we could use LEDs to create a firework display? The answer is a resounding yes, we can!

Sphero on Vimeo Sphero is a completely new type of game system. It’s the world’s first robotic ball that you control with a tilt, touch, or swing from your smartphone or tablet. You can drive Sphero, play tabletop and multiplayer games, use Sphero as a handheld controller for on-screen gameplay, learn basic programming, and even play augmented reality games. Check us out online and order your own: gosphero.com Milk Jug Rocket Launcher Make: Projects Milk Jug Rocket Launcher Share this: Email Don’t have the time or enough PVC pipe to build a heavy-duty launcher for your paper rocket? Tomorrow's Learning Today: 7 Shifts To Create A Classroom Of The Future Tomorrow’s Learning Today: 7 Shifts To Create A Classroom Of The Future by Terry Heick For professional development around this idea or others you read about on TeachThought, contact us.

Makerspaces in the Classroom During my eight-plus years of teaching students in a makerspace-style environment, I have witnessed first-hand a surge of interest in problem-based curriculum from both our youth and their parents due to its ability to engage students and to help them retain the knowledge. This is why the marriage between the classroom and the makerspace is so potent. It fills the gap between classroom theory and the physical world. Historically, sparse classroom budgets have been the root cause for a lack of modern equipment in the classroom. This made sense, of course, when an entry-level 3D printer could cost more then $20,000. Now, a derivative of the technology can be purchased with the proceeds of a single bake sale, or even through parent donation.