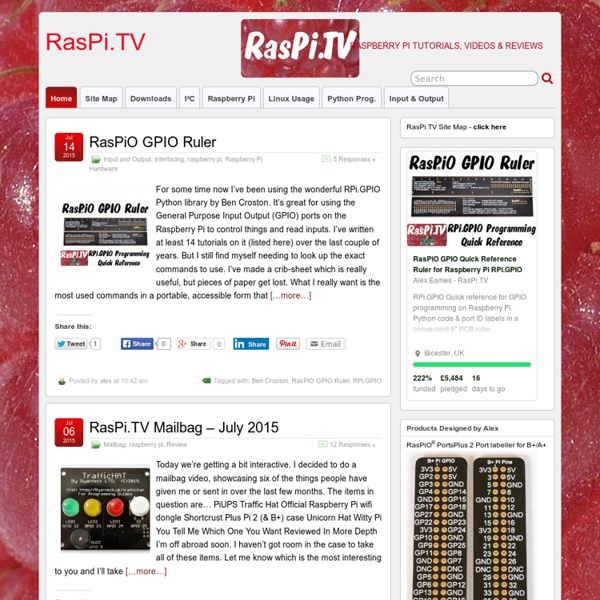 Tutorials & Technicalities: Compile Bitcoin Core on Raspberry Pi (Raspbian) If you want to run a full node on the Bitcoin network, you might want to do so on a computer that doesn't use so much power and is very inexpensive. The Raspberry Pi is an obvious choice for that. Here's a tutorial on how to install the newest version of Bitcoin Core on the Raspbian OS, which is based on the Debian GNU/Linux distribution. If you have used Debian or Ubuntu Linux, you'll find many things familiar about Raspbian. The Raspbian repositories currently contain a very old version of the original Bitcoin client, Bitcoin Core.

Adapt your Raspberry Pi Camera for close-up use The Raspberry Pi Camera is a fixed focus module, so that anything from about 0.5m to infinity is acceptably sharp. This has strengths and weaknesses, as with every design decision. The weakness in this case is that if you want to film or photograph anything closer than about 50-75cm it will be out of focus. With large SLR cameras, what people do is change the lens for a macro or close-up lens. We can’t do that easily. LandTiger Baseboard LandTiger Baseboard The LandTiger v2.0 is not a baseboard in the sense that it can host an mbed module. The board is however rather compatible to mbed LPC1768 hardware and software and provides alot of onboard resources. The board is produced by PowerMCU and available from several vendors on ebay and other webstores. The average cost is about $70 for the board, a 3.2inch 320x240 TFT LCD, powersupply and some cabling. High res picture is here

Minecraft Pi Recipe Cards These Raspberry Pi recipe cards include a selection of basic Python programs that work with Minecraft: Pi Edition. They are designed to be used in workshops or classrooms and cover some fundamentals of programming in Python. You can also use them by yourself as a quick introduction to Python programming with Minecraft Pi. Each of the six recipe card has three parts. amazon.co I tested this product, with an iPhone 4S, an iPad gen 1, and a blackberry.Upon opening the product, I was pleasantly surprised to find an iPhone/iPad connector, which it says it doesn't come with. So that was an added bonus. Build quality is excellent, it feels very sturdy and solid, yet not too heavy. It even comes with a built-in torch, which is surprisingly powerful.Using the juice pack is simple.

Python Programming with Minecraft Pi: Early Draft When I first heard that Minecraft would be released for the Raspberry Pi I punched the air. The nice people at Mojang had just given me the perfect platform to teach students programming: a creative platform. One where students are encouraged to explore ideas in a familiar environment, while seeing the tangible results of their efforts. Minecraft Pi uses an application programmer interface (API for short) that allows programmers to interact with a Minecraft game world. Students can combine the API into their own Python programs to do things like place blocks, teleport the player or access hidden features like chat. For example they can create a castle with code in a few seconds, instead of building it by hand (which takes ages).