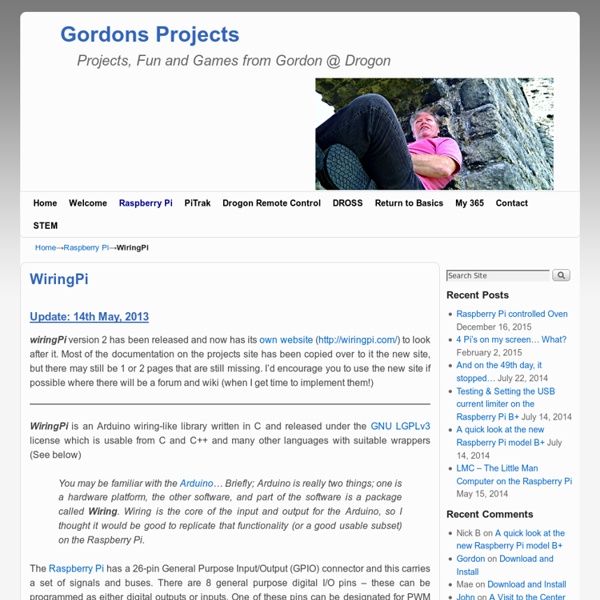 Update: 14th May, 2013 wiringPi version 2 has been released and now has its own website ( to look after it. Most of the documentation on the projects site has been copied over to it the new site, but there may still be 1 or 2 pages that are still missing. I’d encourage you to use the new site if possible where there will be a forum and wiki (when I get time to implement them!) WiringPi is an Arduino wiring-like library written in C and released under the GNU LGPLv3 license which is usable from C and C++ and many other languages with suitable wrappers (See below) You may be familiar with the Arduino… Briefly; Arduino is really two things; one is a hardware platform, the other software, and part of the software is a package called Wiring. The Raspberry Pi has a 26-pin General Purpose Input/Output (GPIO) connector and this carries a set of signals and buses. The Revision 2 Raspberry Pi has an additional 4 GPIO lines on a separate connector which you have to solder onto the board.

Raspberry pi – Setting up auto-login and auto-loading the gui Home > How To, Raspberry pi, Technology > Raspberry pi – Setting up auto-login and auto-loading the gui Setting up Auto-Login In the GUI left click in the bottom left hand corner on the blue cross to display the options menu (Like the start button in windows) Go up to “other” and then scroll down the list until you get to “terminal” and left click You should now see the “terminal” window which is just like a cmd box in windows and enter the following command bcm2835: C library for Broadcom BCM 2835 as used in Raspberry Pi This is a C library for Raspberry Pi (RPi). It provides access to GPIO and other IO functions on the Broadcom BCM 2835 chip, allowing access to the GPIO pins on the 26 pin IDE plug on the RPi board so you can control and interface with various external devices. It provides functions for reading digital inputs and setting digital outputs, using SPI and I2C, and for accessing the system timers. Pin event detection is supported by polling (interrupts are not supported). It is C++ compatible, and installs as a header file and non-shared library on any Linux-based distro (but clearly is no use except on Raspberry Pi or another board with BCM 2835). The version of the package that this documentation refers to can be downloaded from You can find the latest version at

AV and Automation Industry eMagazine - Siri Home Automation Integration from Start to Finish <br>Part 1 - The Basics (using a Linux VM) Intro After trying and failing to get SiriProxy up and running last year, I was inspired to get it working on my Raspberry PI by this article, but had much grander plans. There have been lots of posts about installing a SiriProxy, but a lot are very specific applications that don’t interest me (using GPIB to open a garage door for example) or there have been too many vagaries in the instructions: usually because your environment is different from the authors.

Install and use TightVNC remote desktop on raspberry pi – through windows, Android or IOS » RasPi.tv Tested on Wheezy Beta and Raspbian distros. I’m having fun and being a bit silly with tightvnc here. You can even use it to have a GUI for your Raspberry Pi from your Android phone. 8-) TightVNC is a compact remote desktop application you can use with the Raspberry Pi. Stewart Watkiss has written an excellent explanation of how to install and configure it. I’m going to cover the basics, but for more detail visit his PenguinTutor VNC page

TRENDnet TEW-647GA TRENDnet TEW-647GA Wireless N Gaming Adapter NSPEED WIRELESS GAMING ADAPTER 300MBPS F/WII XBOX 360 PLAYSTATION from mwave.com Description: The Wireless N Gaming Adapter from TRENDnet is a wireless Ethernet bridge, designed for use with popular game consoles. Playing games online is more popular than ever, but most game consoles only feature a wired Ethernet port for network connectivity. This requires you to run a long Ethernet cable to your router for network connectivity. This device plugs directly into your Wii, Xbox, Xbox360, PS2, or PS3 and converts the Ethernet port into a high-speed 802.11n Wi-Fi device. The Gaming Adapter uses advanced Multiple Input Multiple Output (MIMO) antenna technology to reduce the amount of dead spots in Wi-Fi coverage.

s Raspberry Pi Lesson 11. DS18B20 Temperature Sensing @Raspberry_Pi #raspberrypi January 29, 2013 AT 8:28 am Adafruit’s Raspberry Pi Lesson 11. DS18B20 Temperature Sensing @ The Adafruit Learning System. The Occidentalis Linux distribution for Raspberry Pi (and Raspbian as of Dec 2012) includes support for the DS18B20 1-wire temperature sensor. Raspberry Pi - run program at start-up Anyway, I wanted to get my Raspberry Pi to start no-ip dynamic dns service when it started-up, so I wouldn't have to remember to start it every time it was powered up. For details on how to install no-ip on the Pi, see this post. There are loads of ways of running a command at start-up in Linux but my favoured approach is to create an initialisation script in /etc/init.d and register it using update-rc.d. This way the application is started and stopped automatically when the system boots / shutdowns. Create script in /etc/init.d sudo nano /etc/init.d/NameOfYourScript

84 MB Minimal Raspbian ARMHF Image for Raspberry Pi Many embedded systems applications do not require a desktop environment or graphical interface on the screen (e.g. server), and you may want to only install the files you really need on the SD card either to reserve as much space as possible for data and/or your program or to reduce costs. After searching for a minimal image based on Raspbian ARMHF distribution for the Raspberry, I could only find Linux Systems minimal image based on the Alpha version of the Raspbian Wheezy. Their compressed image is 109 MB in size, has a custom kernel, sshd and ntpd are enabled, but the wireless tools were deleted, and at the time the swap was located in another partition instead of a file inside the rootfs. The uncompress rootfs is about 414 MB (as reported by df -h when mounted as a loop device). I decided to prepare a minimal image myself based on the first Raspbian Wheezy release, that supports about the same features of the image mentioned above, plus support for the wireless tools. sudo rm -rf opt