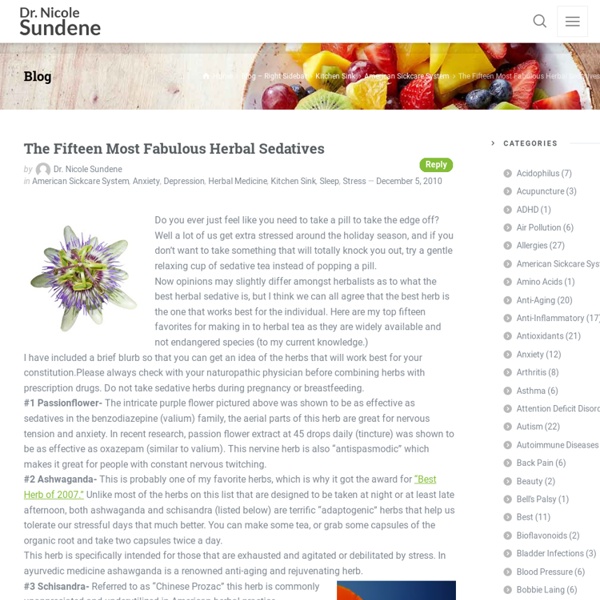 Do you ever just feel like you need to take a pill to take the edge off? Well a lot of us get extra stressed around the holiday season, and if you don’t want to take something that will totally knock you out, try a gentle relaxing cup of sedative tea instead of popping a pill. Now opinions may slightly differ amongst herbalists as to what the best herbal sedative is, but I think we can all agree that the best herb is the one that works best for the individual. Here are my top fifteen favorites for making in to herbal tea as they are widely available and not endangered species (to my current knowledge.) I have included a brief blurb so that you can get an idea of the herbs that will work best for your constitution.Please always check with your naturopathic physician before combining herbs with prescription drugs. #3 Schisandra- Referred to as “Chinese Prozac” this herb is commonly unappreciated and underutilized in American herbal practice. #9 St. December 5, 2010

For the Mixtresses: Sweet Roses Hair Tea (stevia for itchy scalp) I mean, the scalp is just skin, yes? So I’m thinking this may be the ticket: “Stevia concentrate in the form of drops has also been used directly on sores or blemishes to promote healing. For this reason, some advocates of stevia use it on other skin conditions such as eczema, dermatitis, or minor cuts or wounds.” ~ Stevia by Rita Elikins, M.H. Which led to this: Sweet Roses Hair Tea Ingredients (click the links to shop ‘em) 2 teaspoons dried stevia; know to treat skin conditions such as eczema, dermatitis, or minor cuts or wounds.2 teaspoons dried rose buds; antiseptic, antiparasitic and anti-inflammatory properties soothe, heal and increase blood circulation.2 cups water Bring water to boil in a small saucepan and add stevia and rose buds. Turn heat off and allow herbs to steep for 30 minutes. Strain the herbs from the tea using a strainer or cheesecloth. Funnel into a container. Application Cleanse and condition hair. Within an hour of application I felt a very slight tightening.

Artist Takes Every Drug Known to Man, Draws Self Portraits After Each Use This is all kinds of cool, and everything your mother told you not to do. Bryan Lewis Saunders is an artist from Washington D.C., not just any artist though. Saunders prefers to take a more unconventional approach to his artwork. Arguably his most interesting project, entitled DRUGS is described as follows: Below, you can view a collection of portraits Saunders drew while under the influence of various substances ranging from cocaine, to marijuana, to DMT. Each portrait is an astonishing look into the mind of someone tweaked out on drugs, something that your eyes will surely appreciate. Abilify / Xanax / Ativan 90mg Abilify 1 sm Glass of “real” Absinth 10mg Adderall 10mg Ambien Bath Salts 15mg Buspar (snorted) 4 Butalbitals Butane Honey Oil 250mg Cephalexin 1/2 gram Cocaine Computer Duster (2 squirts) 2 bottles of Cough Syrup 1 “Bump” of Crystalmeth 4mg Dilaudid 1 shot of Dilaudid / 3 shots of Morphine 60mg Geodon Hash Huffing Gas Huffing Lighter Fluid 7.5mg Hydrocodone / 7.5mg Oxycodone / 3mg Xanax 2mg Xanax

Holiday Gift Guide 2012 Hi, Courtney here, the senior editor at YouBeauty. Over the course of the year I see approximately one billion products, go on about 1.5 million launch events, and try around 800,000 new things. Only a few really noteworthy products make it past my skepticism. So, this year I personally took it upon myself to pick out things I want do the holiday shopping for you so you know that if it’s in here, it’s not garbage and you’ll reign supreme as the dopest gift giver ever. Ready? MORE: Treat Yo' Self This Holiday Tarte Carried Away Collector’s Set, $54 ($512 value, and no that is not a typo) Good for: Your female boss Fact: Every woman loves Tarte makeup. Worker B Hand Crafted Skincare, $4 - $30 Good for: Your kid’s teacher I always thought people were exaggerating when they complained about chronically dry, cracked hands in the winter, until our research editor showed me her sad, bleeding knuckles. MORE: Get Smooth, Silky Hands Eos Alice in Wonderland Collection, $7.99 Good for: Secret Santa gift

Cannabis, cannabinoids and cancer – the evidence so far [Note – we are updating this blog post regularly as new research is published. Last update 16/03/17 ] IMPORTANT – we have become aware that scammers are tricking cancer patients and their families into handing over money for “cannabis oil”, yet receiving nothing in return. Cannabis has long been used for medicinal as well as recreational purposes. Few topics spark as much debate on this blog and on our Facebook page than cannabis. So we thought we’d take a look at the common questions raised about the evidence and research into cannabis, cannabinoids (the active chemicals found in the plant and elsewhere) and cancer, and address some of the wider issues that crop up in this debate. We’ve broken it down under a number of headings: This post is long, but can be summarised by saying that at the moment there isn’t enough reliable evidence to prove that cannabinoids – whether natural or synthetic – can effectively treat cancer in patients, although research is ongoing around the world. Kat

Head Scarf Tutorial After many requests, I finally made a tutorial on how to tie a simple head scarf. It's really, really easy. I did this without looking in the mirror, so that should tell you how easy it is. Let's get started! Start with a large, square scarf. Fold one corner to the other to form a triangle. Fold the corner down to about the middle, and then fold over again (but not all the way to the edge, because you want it to be a little thicker). Put the scarf around your head with the ends in the front, making sure the wrong side of the scarf (the part where you can see the folds) is against your head. Tie it in a loose knot at the front. Tuck the ends behind/underneath the scarf. Done!

Snake oil? Scientific evidence for health supplements Updated September 2015 with a revitalising boost of fresh data. New entries include melatonin, proving travellers were right about its effect on sleep; and good evidence for Vitamin D for flu, bones and long life. Evidence for valerian as a cure for anxiety has dropped, as has any likelihood that cranberry juice has impact on urinary infections. Thanks to visitor suggestions we’ve added entries for supplements that may in some cases be harmful, including Vitamin A, which has been linked to birth defects. Note: You might see multiple bubbles for certain supplements. This visualisation generates itself from this Google Doc. As ever, we welcome your thoughts, crits, comments, corrections, compliments, tweaks, new evidence, missing supps, and general feedback.

8 Do-It-Yourself Home Facials Facials are a great way to keep your skin glowing, but they can be pricey. We asked Louisa Macan-Graves, author of Hollywood Beauty Secrets: Remedies to the Rescue, and Elda Argenti, owner of the Plantogen skincare line, for their favorite make-at-home face masks crafted from common household ingredients. For All Skin Types Brighten: Cut a slice of ripe papaya and remove the seeds and pulp (save the pulp for a snack later—it’s great for digestion). Exfoliate: Combine 1 tsp honey and 1 tsp olive oil. Cleanse: “Believe it or not, I love to cleanse with oil,” says Argenti. For Oil- and Blemish-Prone Skin Lift & Tighten: Combine 2 Tbsp plain yogurt with 1 Tbsp fresh lemon juice (the juice of one lemon) and apply to your cleansed face and neck. Tone: This toning eye treatment helps to “de-puff, relax, refresh and energize your skin,” says Argenti. For Dry Skin Soothe: Combine 2 Tbsp honey with 1 Tbsp apple cider vinegar or lemon juice. WD on TV: Make Your Own Beauty Products

Granmas Attic ...Old Time Beauty and Health Tips Two tablespoons of sesame oil, one tablespoon olive oil, two tablespoons avocado oil, two tablespoons almond oil, 2000 IU vitamin E (D-Alpha Tocopherol), 100Thousand USP units vitamin A, a drop or two of your favorite perfume.(optional) Pour the oils into a small jar or empty bottle. Take 10 gelcaps of vitamin E (200 IU ea) and 4 caps vitamin A (25,000 units ea). Puncture the capsules with a needle, and squeeze out the contents into your container. This formula is especially useful for those who have badly deteriorated complexion and prematurely aged or dry lifeless skin. Notsalmon