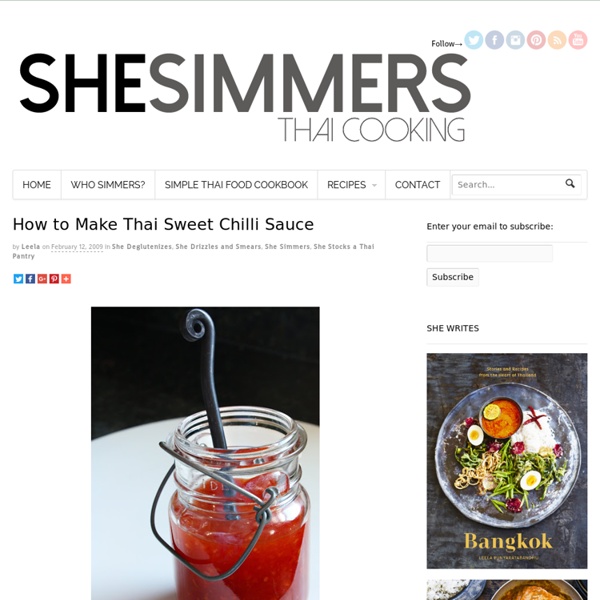 If someone asked me what I would choose as the one single dish to have as my last meal on earth, I would, of course, have a hard time coming up with an answer. However, I am surethe incomparably magnificent combo of hot-off-the-steamer Thai sticky rice, Thai-style grilled chicken, and this beloved Thai sweet chilli saucewould be hovering through my mind as one of the top five contenders. Thai sweet chilli sauce has been a quintessential part of my life. A life bereft of it is simply unimaginable. In fact — and please don’t tell anyone — this post was inspired by a movie which I recently saw wherein the protagonist’s existence revolved around hummus to the point that he even used it as toothpaste. This Thai sweet chilli sauce is to me like what hummus is to that guy in the movie. The heat is mostly in the veins and seeds of chilli peppers. Tips on how to make this sauce for low-carbers or diabetics. How to Make Thai Sweet Chilli Sauce Author: Leela Recipe type: Sauce, Condiment 1.

Consider These 4 Thai Condiments Your Kitchen’s Secret Weapons To say that the Thai people love condiments and relishes is a big understatement: There are too many to count, and parodies have been written about how incredibly vast the category is. Take the late M.R. Kukrit Pramoj’s in One Thousand and One Nights. In this version, our Scheherazade was a young consort of an imaginary Thai king who lived in ancient times. Just as Scheherazade in the original story intentionally delayed her demise by telling one story to the king each night, the Thai Scheherazade also did the same—except instead of telling stories, she shared Thai recipes. The smart girl began with the condiment and relish category.

ChefSteps Sign In Shop Joule Premium Sous Vide All About Sous Vide Ingredient Spotlight: Berbere, a Fiery, Aromatic, and Highly Flavorful Seasoning Blend from North Africa If you have ever had Ethiopian food or any food from countries in the Horn of Africa (Djibouti, Eritrea, and Somalia), you have probably encountered Berbere. Like za’atar in the Middle East and harissa in North Africa, berbere is a staple seasoning that can be found across all kinds of dishes in various countries in Africa. Let’s learn a little more about what berbere is, what it tastes like, and how we can incorporate it into our cooking. What is Berbere? Delicatessen with love Eat, Eat, Eat!!! From Grandma with love I will never forget grandma Sara’s artichokes. They have become a cult since when a famous Spanish cooking blog published their recipe, which I transcribed from memory, following the thread of the taste left in my mouth (just like Proust’s madeleine). Gabriele Galimberti pays homage to all the grandmothers in the world and to their love for good cooking, starting from his own grandma Marisa who, before the departure for his tour around the world by couchsurfing, took care to prepare her renowned ravioli. She was not so concerned about the possible risks or mishaps her grandson might face in his adventurous travelling worldwide, but her major worry was, “what will he eat?”.

Food: Anchovies lift pesto dish to fit-for-company When I first met my soon-to-be husband, he told me his favorite food/flavor was pesto. Being a novice cook, and fairly unsophisticated, I had never tried to make pesto, thinking it had to be some fancy Italian preparation that I could never master. But I tackled the challenge with gusto: I purchased a basil plant and began plucking the tiny leaves for the recipe. Notice I said “tiny leaves,” because I had foolishly purchased globe basil whose leaves are at best miniscule. I had no clue there was Genovese basil or any other kind of special basil for pesto. As far as I can remember, the dish turned out OK.

Sichuan-Inspired Pickled Vegetables You will love what happens to radishes and carrots in this pickle -- one turns a sheer sunset pink while the other practically pulsates orange. Chinese pickles are a cook's great cheat. In an elaborate Chinese menu, they save you from having to pull off time-consuming appetizers while they tune up palates for what's to come. Although these pickles are Chinese in origin, they happily pair up with a burger, a bowl of beans, or a plate of grilled chicken. The pickles keep for a month in the refrigerator. Marinade: This Miso Dressing Will Liven Up Anything in Your Fridge Welcome to Never Fail, a weekly column where we wax poetic about the recipes that never, ever let us down. This week: the miso dressing recipe that associate social media manager Emily Schultz just couldn't live without. A couple of months ago my coworker, Alex Beggs, was ranting and raving in a meeting about “her sauces," the ones she makes all the time and keeps in her fridge to doctor up anything from steaks to grain bowls to salads. The thought of keeping a collection of sauces was as intriguing to me as the 4 lb. bag of grandma mints she keeps on her desk—which is to say, VERY INTRIGUING. After that, I made sure that I paid close attention whenever I cooked a recipe that included a sauce to see if it was worthy of becoming one of "my sauces."

Black Radish Relish Recipe Two friends joined Dana and I for dinner at Parts and Labour in Toronto a few months ago. We were spoiled as Chefs Matty Matheson and Matthew DeMille sat us in the kitchen and encouraged us to eat a large percentage of the menu. We didn`t come close to completing a tour of their offerings (this would be impossible with 4 people) but certainly sampled a marathon of taste and were impressed at every turn in the menu (I can still remember 90% of what I ate that evening). Turbot Sous-Vide with Red Wine Sauce The inspiration for this dish came from my recent dinner at 212 in Amsterdam. I really liked the cod with red wine sauce, and thought it would be nice to prepare something similar. If only because everyone seems to think red wine doesn’t go with fish — which is not always true. For this to work, the wine (both the wine for the sauce and the wine you will drink with the dish) should not be too tannic, so a Pinot Noir from a cooler climate such as Burgundy is a great choice. Rather than cod I used turbot, which I prefer for both flavor and texture.

Raw Recipe Beet Chips Ask anyone who knows me what my biggest downfall is when it comes to food, and they will tell you potato chips. When stress mounts, I can just hear the chips little voices. “Susan, we will make you feel better. Susan, we are crunchy and salty. The Best Thing We've Ever Put on Steak Necessity is indeed the mother of invention for dedicated chefs. When a vegetarian guest with an interest in Korean food made a reservation at Ed Lee’s 610 Magnolia in Louisville, the chef realized something “very sad” about the idea of never experiencing kalbi, the sweet-spicy-salty combination he most enjoys in Korean barbecue. “I was kind of messing around in the kitchen and thought, 'Just because you can’t eat beef doesn’t mean you should be deprived of the kalbi sauce,'” Lee says. But he quickly learned that simply marinating or basting vegetables in the combination of soy, ginger, chiles, sugar and sesame oil alone wouldn’t work: “It’s almost too strong that way,” he says, explaining that by the end, “you just taste soy.” Experimenting further, he found an ideal vessel in compound butter.

The Best Garlic Butter - Cook the Story Use this garlic butter to make garlic bread, melt over steamed vegetables, or make a quick pasta side dish. There is a fancy French name for this butter recipe, but it is so easy I don’t think we need to complicate it with hard-to-pronounce words. We’ll just call it the best garlic butter. As a matter of fact, the most difficult part of this recipe is waiting for the butter to come to room temperature. But it is worth it. I like to start with unsalted butter so I can control the amount of salt that goes into my food.

Do Chua (Vietnamese Carrot and Daikon Pickle) Are you getting sick of me talking about Suncoast Organics yet? I hope not, because I’m going to talk about them again. This week I got the prettiest rainbow-colored carrots in my goodie box. Another “first” for me. I’d seen pictures of them in cookbooks and magazines, but never, ever found them in any market around here.