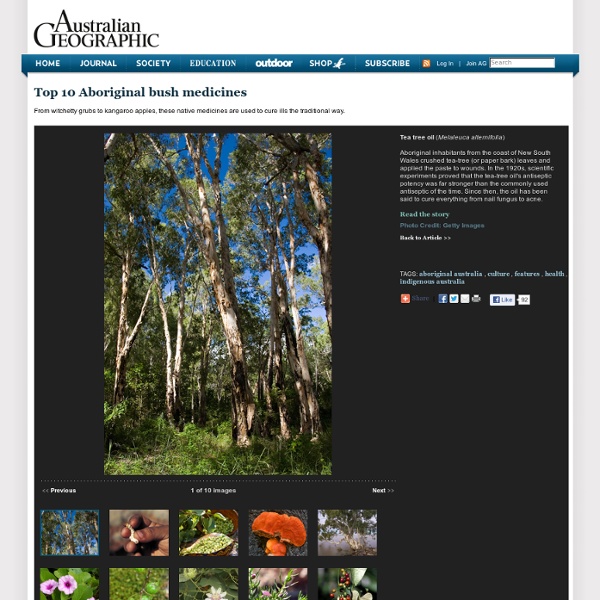 18 Of Nature’s Most Powerful Medicinal Plants (Part of an Exclusive WebEcoist Series on Amazing Trees, Plants, Forests and Flowers) From marijuana to catnip, there are hundreds of remarkably common herbs, flowers, berries and plants that serve all kinds of important medicinal and health purposes that might surprise you: anti-inflammatory, anti-fungal, insect repellent, antiseptic, expectorant, antibacterial, detoxification, fever reduction, antihistamine and pain relief. Here are eighteen potent medical plants you're likely to find in the wild – or even someone's backyard – that can help with minor injuries, scrapes, bites and pains.* Marijuana Images via Current and Street Knowledge Seriously. Lady Ferns Image via US Forest Service If you grew up in the Pacific Northwest you likely know what ferns are good for: treating stinging nettles. California Poppy Images via Netstate and Mountain Meadow Seeds The brilliant blooms of the poppy make this opioid plant an iconic one. Blood Flower Tansy Image via Earth Heart Farm Korean Mint (hyssop) Sage

Aboriginal Astronomy The Emu in the Sky The photograph above shows the aboriginal "emu-in-the-sky" constellation in the sky. It won its creator, Barnaby Norris, third prize in the prestigious 2007 "Eureka" awards. To see the "constellation", look at the dark dust-clouds, not the stars! Below it is the emu engraving at the Elvina engraving site, in Kuring-Gai Chase National Park, near Sydney The constellation is positioned above the engraving as it appears in real life in Autumn. Many Aboriginal groups have stories about the “Coalsack” – the famous dark cloud next to the Southern Cross. The Aboriginal Astronomy project aims to study stories like this in a systematic way, and to explore the importance of astronomy in Aboriginal cultures. The other part of the project is to study the artefacts of those Aboriginal cultures whose culture was badly damaged by the arrival of Europeans 200 years ago. However, photographing them is tricky.

Oregano Herbal Medicine, Health Benefits, Preparation, Side Effects Oregano as used as herbal medicine has its earliest beginnings even in early Egyptian times and has been traditionally used as herbal remedy for skin burns, cuts and bruises. Because of the minty flavor of oregano, it is also used as herbal remedy for sore throat, asthma, colds, coughs and flu. Antiseptic and fungicide. Oregano leaves and flowers are used to treat cuts and burns. Oregano contains thymol, a crystalline substance that has antiseptic and fungicide properties. Respiratory and stomach ailments. Treatment for Colds, Fever and Indigestion. Antioxidant Oregano is known to have antioxidant properties that can protects against damaging agents. Relaxant. Pain reliever. Source of fiber. Source of Vitamins and minerals. Sinus Inhalant. Acne and pimple treatment. Arthritis, swelling and muscle pains. Dandruff and lice control. Oregano oil helps cure infections of fingernails. Asthma attach prevention.

Herbal Remedies" While some people may dismiss herbal remedies as quackery, the use of botanicals is well rooted in medical practice. Ancient doctors methodically collected information about herbs and developed well-defined pharmacopoeias to treat a variety of ailments. More than a quarter of all drugs used today contain active ingredients derived from those same ancient plants. It's estimated that nearly 80 percent of the world's population use herbs for some aspect of primary health care. In the United States, more than 1,500 botanicals are sold as dietary supplements; top-selling herbs include echinacea, garlic, goldenseal, ginseng, ginkgo, saw palmetto, aloe, ephedra, Siberian ginseng, and cranberry. Clinical studies on a handful of herbs are underway, but to help you understand the benefits and risks, we've compiled a comprehensive guide to herbs, including potential uses, side effects, and precautions. This information is solely for informational purposes.

Dreaming of the sky Just as ecologists are increasing their understanding of the Australian environment through studying Aboriginal stories and talking to tribal Elders, so astronomers are beginning to appreciate Indigenous knowledge of the sky. When Macquarie University PhD student Duane Hamacher encountered Aboriginal Dreamtime myths involving fiery stars falling to Earth, he decided to see if he could track where these objects had landed. Following several leads, Duane surveyed remote areas of Australia using Google Earth—and discovered a meteor impact site at Palm Valley, about 130 kilometres southwest of Alice Springs. What Duane and colleagues from Macquarie’s Department of Earth and Planetary Science found when they visited Palm Valley was a bowl-shaped geological structure that could not have been formed either by erosion or volcanic activity. Rock samples at the site revealed shocked quartz, a direct indicator of meteorite impact. Understanding eclipses

Top 7 Surprising Reasons Why Coriander was so Popular in All Ancient and Modern Civilizations - Tiptop Home Remedies Mostly people use coriander for cooking, but also many of them don’t know other ways how to use it for improving their health. When it comes to the health benefits of coriander (also known as cilantro), it also includes various treatments for high cholesterol levels, inflammation of the skin and other disorders, anemia, menstrual cycle disorders, smallpox, blood sugar disorders, as well as certain benefits in eye care. This herb is full of Magnesium, Vitamins B, A and C and also Iron. Also very important essential oils are present in it. Almost all parts of this plant are used, the seeds, leaves, stems, essential oil, and roots, they can help with some digestive problems, coughs, bronchitis, also joint pain and rheumatism. 1) Coriander is a great source of powerful antioxidants, so it can fight successfully certain oxidative damage. 3) It is very good and beneficial in the treatment of diabetes. Do you eat coriander or use it while cooking?

Oregano Has 4 Times The Antioxidant Potency Of Blueberries by KAREN FOSTER Oregano is widely considered as nature’s antibiotic. It is an indispensable spice in Turkish, Greek, Portuguese, Spanish, Latin American and Italian cuisine, oregano is the must-have ingredient in tomato sauces and pairs well with capers and olives. It may be one reason why people who eat a Mediterranean diet tend to live longer and healthier lives. Oregano is an important culinary and medicinal herb that has been used in medicine and cooking for thousands of years – with a number of health benefits. It is one of the top five spices in the world with one of the highest ORAC (Oxygen Radical Absorbance Capacity) scores meaning it will more effectively neutralize free radicals. Oregano typically grows 50 cm tall and has purple leaves around 2 to 3 centimeters in length. The chemicals that give the herb its unique and pleasant smell are thymol, pinene, limonene, carvacrol, ocimene, and caryophyllene. Oregano is a rich source of: -fiber -iron -manganese -Cough -Asthma -Acne -Dandruff

Aboriginal astronomers: world's oldest? THERE’S GROWING EVIDENCE THAT Australia’s indigenous people could be the world’s oldest astronomers, according to astrophysicist Ray Norris, who is based at CSIRO's Australia Telescope National Facility in Sydney. He has researched Aboriginal stories about the night sky for five years and says one of the earliest European records of indigenous astronomy was made by William Stanbridge, an Englishman who emigrated to Australia in 1841 and ran sheep at Lake Tyrrell, in northern Victoria. Stanbridge befriended members of the local Boorong people. They showed him how they viewed the constellations and Stanbridge published their stories in his 1857 essay On the Astronomy and Mythology of the Aborigines of Victoria. Stanbridge’s writings recorded the Boorong’s holistic use of astronomy and explained how they integrated their understanding of the stars with knowledge of the land and seasons, Ray says. Perspectives of the southern cross Source: Australian Geographic Issue 97 (Jan - Mar 2010)