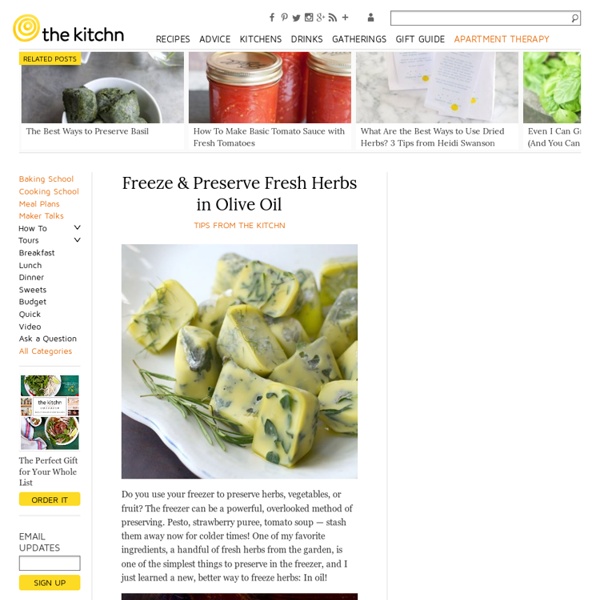 Do you use your freezer to preserve herbs, vegetables, or fruit? The freezer can be a powerful, overlooked method of preserving. Pesto, strawberry puree, tomato soup — stash them away now for colder times! One of my favorite ingredients, a handful of fresh herbs from the garden, is one of the simplest things to preserve in the freezer, and I just learned a new, better way to freeze herbs: In oil! I noticed a post at The Gardener's Eden (read it here) recommending that you freeze some herbs in oil. Why? It's also a great way to have herbs ready immediately for winter stews, roasts, soups, and potato dishes. Given this use, the oil-and-freezer method of preservation works best with the tougher hard herbs such as rosemary, sage, thyme, and oregano. Soft herbs such as mint, basil, lemon verbena, and dill are usually added raw to a dish, and they don't respond as well to this kind of preserving. Here are some tips on preserving herbs in oil. Previous image Next image More on Preserving Herbs

Teagan’s Food Musings How to Keep Feces Out of Your Bloodstream (or Lose 10 Pounds in 14 Days) Ruh-roh. (Photo: Toby Otter) Following our Paleolithic ancestors, our Neolithic ancestors lost an average of six inches in height. Most people now have those last 5-10 pounds that seem impossible lose. The causes for both, surprisingly, may be the same. Robb Wolf can explain. I have known of Robb for several years, but I only met him through a friend a week ago. Enter Robb Wolf. A Common Problem Below I describe several people who at first glance appear different, but in fact they all share a common problem. For you, this chapter may represent the “missing link” in your quest for improved performance and health. Alex, Age Five I first learned of Alex from my friend Kelly. Kelly contacted me on behalf of the family and asked if I had any ideas that might help Alex. Sally, Age Sixty-One Sally was referred to us by her family physician. Our recommendations focused on specific changes to her nutrition and lifestyle. Jorge, Age Forty Jorge started working with us primarily to lose weight. Bran: 1.

Smoked salmon and avocado stacks My brother and I share many things. A love of music. An obsession with trivia. Childhood memories. One of our earliest shared childhood memories was going to La Fontaine, a restaurant that was very popular in Port Elizabeth in the 1970s and 1980s – the kind of place where the italian owner wore a suit and greeted you by name at the door; where all the ladies were given a fresh flower corsage to wear; and a real live pianist played tinkly melodies from one corner of the room. It was definitely here that we both developed our love for smoked salmon, a dish which my father enthusuastically ordered his wholfe life despite cautioning us against EVER eating raw fish such as sushi (!). And I don’t mean that in a bad way! Harry Forman developed the London cure in the early 1900s specifically because he thought that smoked salmon was often smoked and salted to the point that you tasted only the smoke, not the fish. So my only dilemma was what to make with this delectable fishy bounty. Method:

Superhuman Shake for Strength and Muscle Did you know that more than 45 million Americans belong to a gym or health club? That must mean there are a whole lot of people who want to feel and look better. Most of these 45 million Americans, hitting the gym, want to lose weight and get stronger. But how many of them are getting the results as quickly as they want? Not many… Are you ready to feel fitter than you have in your entire life? There are a few ways to gain this amazing vitality and strength. Increase Strength All Naturally In his NY Times Best Selling book 4-Hour-Body Tim Ferris uses himself as a test subject to prove how you can naturally boost strength and stamina. I’ve talked numerous times about the importance of eating whole, fresh, organic, ‘real’ foods instead of fake foods. Again, I’m going to tell you here that one of the best ways to increase strength and boost vitality is by what you put into your body. Increase Growth Hormone (GH) Production The body makes growth hormone via the pituitary gland. Sources: Dr.

Food - Recipes : Victoria sponge with strawberry jam jack up your testosterone Ok here goes: I was 285lbs, diagnosed medically as having less Testosterone than a baby kitten. I think this was one of the things that got me seriously digging in studies and information in books and online until ultimately logic brought me kicking and screaming to whole natural foods. To stimulate testosterone production, the hypothalamus releases a substance to the pituitary gland called gonadotropin-releasing hormone (GnRH). This hormone, in turn, causes the gland to produce two other hormones, follicle-stimulating hormone (FSH) and luteinizing hormone (LH), collectively known as gonadotropins. There are 2 major parts to Increasing your Testosterone. Zinc- luteinizing hormone AND anti-aromatase OystersShrimpEggsLiverSpinachOmega 3 Fats - Hormonal Fuel! I dropped to 185lbs, then went on a heavy weight gaining regimen, have gained back 25lbs of muscle and can still see my abs. The beauty of it, other than a few veggie focuses, its a meat dominant paleo diet to the core.

Reviving Old Spirits: Food + Cooking James Rodewald finds great new liquors based on old blends enjoyed by George Washington, Ernest Shackleton, and others With apologies to George Santayana, it appears that those who cannot remember the past will be condemned to miss out on some spectacular booze. Have no fear, though, we promise this history lesson will be anything but dry; in fact, the result of our research and investigation is guaranteed to be a wetting of the whistle. We’ll start our studies with another famous George and a rhetorical question: Could “George Washington slept here” (the first real estate cliché, predating “location, location, location” by a few years) owe something to our first president’s interest in distilled spirits? He was reportedly a moderate drinker, leaning to wine, and particularly Madeira, so it probably wasn’t overindulgence that made him so soporific. The genesis of Washington’s distillery can be traced to, perhaps not surprisingly, a Scotsman.

Scottish Pancakes (Drop Scones) These are REAL pancakes! Real SCOTTISH pancakes! Otherwise known as 'Drop Scones' - another old family favourite, so quick and easy to make. These were traditionally made on a 'griddle' which is really just a cast iron hotplate with a semi-circular handle which was hung over the fire. I've never had a griddle, but I have often used my electric frying pan. You will need - A big mixing bowl hotplate or heavy base pan - very LIGHTLY greased and pre-heated to HOT 2 cups of SR flour 2 teasp baking powder 1 tblsp sugar 1 tblsp syrup 2 eggs milk Mix all together in the bowl, adding enough milk to make a 'batter' of 'dropping consistency' - (no lumps!) Pour out on to the hot griddle enough to make a pancake about 3 or 4 inches (75- 100mm) dia. Sometimes I make a GIANT pancake per person. Being up in the highlands of Scotland this week, I thought the workmen (out in the cold wind and showers) doing our decking would appreciate some pancakes. Best wishes from the Highlands of Scotland,

February 2012 Seville oranges have such a short season. I'd bought a couple of kilos with the intention of making marmalade. 10 days later, they were still sitting there SCREAMING at me to be used. I've been so busy that I literally didn't have time to spare faffing about with marmalade, so I decided to turn it into an orange curd instead. I hoped that the tartness would be really apparent as it is with lemon curd. I adore that real mouth puckering citrus tang. At first taste, it was nice - but initially I was disappointed. Then, just when you think it's all over, BAM - that strong orange taste and citrus tang kicks in several seconds afterwards... SEVILLE ORANGE CURD RECIPE (makes 3 smallish jars or two big ones) 200g sugar 3 eggs + 2 yolks 100g melted butter 250ml juice from seville oranges zest 1.1/2 seville oranges First of all, melt the butter and them add the seville juice and lemon zest. Whisk together the eggs, yolks and sugar in a pan, then whisk in the butter and lemon mix. 350g self raising flour