Print - The 75 Books Every Man Should Read 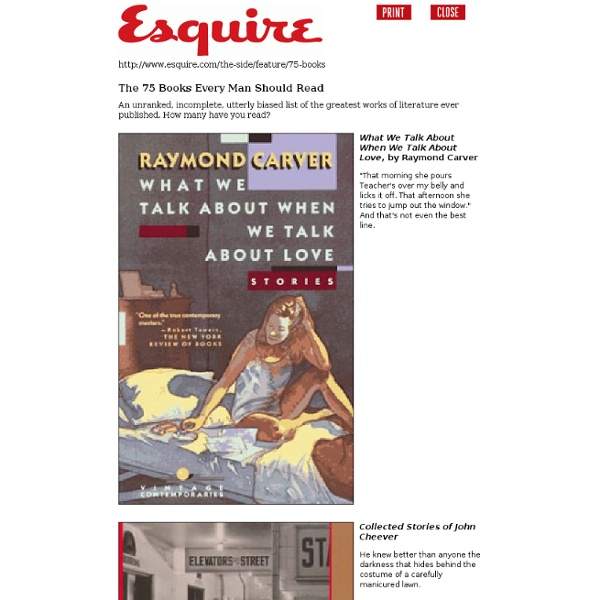 General Fiction Getting Around... Career Essentials Getting Started Queries & Manuscripts Market Research Classes & Conferences Critiquing Crafting Your Work Grammar Guides Research/Interviewing Writing Contests The Writing Business Income & Expenses Selling Reprints Collaboration Pseudonyms Negotiating Contracts Setting Fees/Getting Paid Rights & Copyright Tech Tools The 16 Best Dystopian Books Of All Time Dystopian novelsâ€”stories of the horrific futureâ€”are so common as to be almost forgettable. Here is a compilation of what I believe are the 16 greatest of the genre. I could happily list twice as many that are amazing, but these are the best.

Chilli trick by Gordon Ramsay does work. You’ve probably noticed that most, if not, all my dishes that I’ve posted recently contained chillies. Well I can’t help it that I love my food with kicks but mostly, you got to blame Gordon Ramsay for my chilli obsession. Well, through television, he taught the world and me the neatest way to seed chillies. Tarzan of the Apes, Summarized Copyright 1998 by David Bruce Bozarth, Editor. Illustration Copyright 1998 by Lou Malcangi. Individual author contributions Copyright 1998.

Quotes of the Day - Get daily quotes on Twitter. Follow us on Twitter and get more daily quotes!Don't forget to stop by the Motivational Quotes of the Day.Starling Fitness: Fitness weblog from the authors of The Quotations PageHear Motivational Quotes set to music at Affirmation StationStarling Travel: Travel weblog from the authors of The Quotations PageFind out what happened Today in History (Scope Systems)You can include these quotations on your own Web page.Read classic books, essays, plays, and poetry online at The Literature Page. If an author's name is highlighted, you can click it for more quotations by that author. Click on a quotation for more information about it, or click on the icons next to each quotation:

36 Writing Essays by Chuck Palahniuk 1: Establishing Your Authority Chuck teaches two principal methods for building a narrative voice your readers will believe in. Discover the Heart Method and the Head Method and how to employ each to greatest effect.

The 100 Best Books of All Time Many publishers have lists of 100 best books, defined by their own criteria. This article enumerates some lists of "100 best" books for which there are fuller articles. Among them, Science Fiction: The 100 Best Novels (Xanadu, 1985) and Modern Fantasy: The 100 Best Novels (Grafton, 1988) are collections of 100 short essays by a single author, David Pringle, with moderately long critical introductory chapters also by Pringle. For publisher Xanadu, Science Fiction was the first of four "100 Best" books published from 1985 to 1988. The sequels covered crime & mystery, horror, and fantasy. Lists[edit]

Hans Christian Andersen : The Little Mermaid Far out in the ocean the water is as blue as the petals of the loveliest cornflower, and as clear as the purest glass. But it is very deep too. It goes down deeper than any anchor rope will go, and many, many steeples would have to be stacked one on top of another to reach from the bottom to the surface of the sea. It is down there that the sea folk live. Now don't suppose that there are only bare white sands at the bottom of the sea. No indeed!

Borrowed Words in English The English language has an enormous amount of words that have been borrowed (or loaned) from other languages. This is a collection of tables listing words from the many languages that have contributed words to English. For some languages the word list is complete; for others (French, Greek, Latin, Arabic, Spanish) only a selection of borrowed words is given as there are so many. There are brief explanations for most words and the original literal meaning if appropriate. Book-A-Minute Classics Got another book report to do? English teachers have the inconsiderate habit of assigning mammoth-sized works of literature to read and then actually expecting you to do it. This wouldn't be so bad except that invariably the requisite reading is as boring as fly fishing in an empty lake. Half of those books don't even have discernible plots.

books i should look into getting by elisefields Mar 26