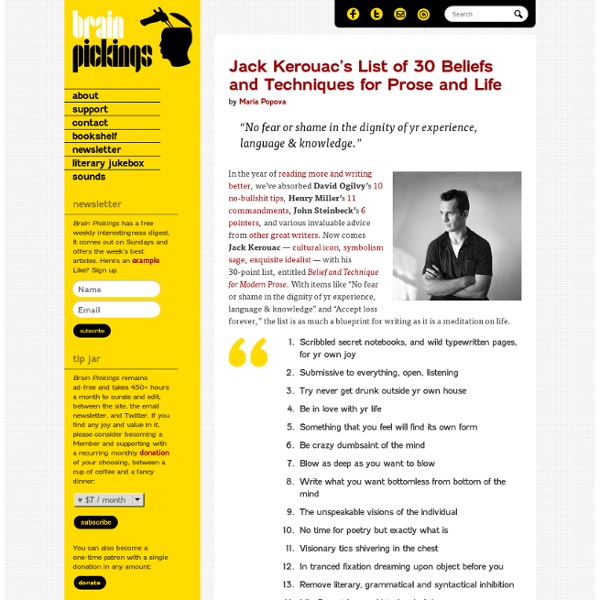 Memoir Manifesto by Deb Olin Unferth Guest editor Deb Olin Unferth offers insights into the art of the memoir and introduces the present and future stars of the genre. Photograph via Flickr by Alice Carrier Let’s have no more insults hurled at the memoir, shall we? A few years ago, when I began writing a memoir, I read piles of them to get a feel for the genre. In the final decades of the twentieth century, the autobiography transformed, as writers began to see the disadvantages of writing blanket summaries of their lives and comprehensive lists of events: the messiness involved in such a project, the inevitable incompleteness, the necessary lack of an arc (if one was going to be honest). Then we begin to see the pivotal classics, such as Michael Ondaatje’s Running in the Family (1982), Tobias Wolff’s This Boy’s Life (1989), Mary Karr’s The Liars’ Club (1995). When Meakin Armstrong of Guernica brought up the possibility of my guest-editing a section, I immediately knew what I wanted to do: a section on innovative memoir.

William S. Burroughs on the Art of Cut-up Writing In late 1920, the Dadaist writer Tristan Tzara wrote "dada manifesto on feeble love and bitter love," which included a section called "To Make a Dadaist Poem," and it gave these instructions: Take a newspaper. Take some scissors. Choose from this paper an article of the length you want to make your poem. Decades later, the Beat writer William S. You can watch Burroughs demonstrating his cut-up technique above, and forever find this clip in our collection of Cultural Icons, which lets you see great writers, filmmakers, and thinkers talking in their own words. Would you like to support the mission of Open Culture? Also consider following Open Culture on Facebook and Twitter and sharing intelligent media with your friends. Related Content: Gus Van Sant Adapts William S. William S. William S.

'The Black Dog' by W. H. C. Pynchon The Dog, J. Laurent, 1874. From Archivo Ruiz Vernacci, Fototeca del IPCE, Madrid. by W. “And if a man shall meet the Black Dog once it shall be for joy; and if twice, it shall be for sorrow; and the third time he shall die.” In a corner of our country not far removed from two of its great cities, there is a low range of mountains, the hoary evidences of ancient volcanic action. The West Peak stands at an angle of the range. It was late in the spring of 18— that I visited West Peak for the first time. The old horse knew that he was bound for home and he took the road at a very good gait. And this is how I met the Black Dog the first time—for joy. I don’t know just how we came to do it. We talked till late that night, and, as the fire died down to a mass of glowing embers, he told me how he himself had twice seen a black dog upon the mountain, but he laughed at the legend, saying that he did not believe in omens unless they were lucky ones. “I did not believe it before. Transcriber’s note:

www.writing.upenn.edu/~afilreis/88v/burroughs-cutup.html In writing this chapter I have used what I call "the fold in" method that is I place a page of one text folded down the middle on a page of another text (my own or someone else's)--The composite text is read across half from one text and half from the other-- The resulting material is edited, re-arranged, and deleted as in any other form of composition--This chapter contains fold ins with the work of Rimbaud, T.S. Eliot, Paul Bowles, James Joyce, Michael Portman, Peter Weber, Fabrizio Mondadori, Jacques Stern, Evgeny Yevtushenko, some newspaper articles and of course my own work-- At a surrealist rally in the 1920's Tristan Tzara the man from nowhere proposed to create a poem on the spot by pulling words out of a hat. A riot ensued wrecked the theatre. Andre Breton expelled Tristan Tzara from the movement and grounded the cut ups on the Freudian couch. In the summer of 1959 Brion Gysin painter and writer cut newspaper articles into sections and rearranged the sections at random.

Web Film & Video: Georges Perec - Récits d'Ellis Island, Part 1: Traces (1978-1980) Duration: 60 minutes Part 1: Traces Part 2: Mémoires, 60 min Produced by: Institut National d'Archives (INA) Written by: Georges Perec Directed by: Robert Bober Sound: Jean-Claude Brisson In 1978, Robert Bober and Georges Perec set out to in the search of traces of Ellis Island, that is, as Georges Perec put it, of "the very site of exile, the place of the absence of place, the non-place, the nowhere." They traveled to New York to film what was left of this "Golden Gate", nicknamed "the Island of Tears" by the immigrants. One of the objectives of the filmmaker and the writer was to gather testimonies of survivors who, as children, passed through Ellis Island. However, they also wanted to understand how and why they both felt that this place concerned them personally. Georges Perec in UbuWeb Sound

Larry Keenan - Beat Generation & Counter-Culture Photography Galleries Thanks to Larry Keenan's masterful photography, we are left with a visually potent view of the Beat Generation and beyond. Keenan's photo-documentation is necessary, for it captures many essential moments -- of Ginsberg, Whalen, Cassady, Corso, McClure, Dylan, and many others. Without Keenan's illustration of people and events that have already hooked us deeply, we would no doubt be struggling along empty-eyed, wondering where's the color, the depth, the light, and the angle of the Beats? We know their literature; we know something about their personal biographies. Yet equally (if not more) important is knowing what everything looked like. Keenan has transcended a few decades of American history and created a movie for us that is shot in still-frames, but which is alive and three-dimensional and momentous.

K. Thomas Kahn on Imre Kertész Imre Kertész. Photograph by Csaba Segesvári by K. Thomas Kahn Dossier K: A Memoir, by Imre Kertész, Melville House, 224 pp. Nobel laureate Imre Kertész is certainly no stranger to controversy. In Dossier K. (2006), published by Melville House this month in a fresh English translation by Tom Wilkinson, Kertész departs from his usual terrain of fiction for that of memoir. The sheer impudence that the book denoted through its mere existence, its style, its independence; a sarcasm inherent in its language that strains permitted bounds and dismisses the craven submissiveness that all dictatorships ordain for recognition and art. Central to this notion is a perpetual reinvention of the self: “being a writer I am constantly working on my identity, and as soon as I come across it I lose it straight away… It’s not always easy to be in full possession of ourselves.” Related to this is Adorno’s famous dictum: “To write poetry after Auschwitz is barbaric.” About the Author:

James Wood · On Not Going Home · LRB 20 February 2014 I had a piano teacher who used to talk about the most familiar musical cadence – in which a piece returns, after wandering and variation, to its original key, the tonic – as ‘going home’. It seemed so easy when music did it: who wouldn’t want to swat away those black accidentals and come back to sunny C major? These satisfying resolutions are sometimes called ‘perfect cadences’; there is a lovely subspecies called the ‘English cadence’, used often by composers like Tallis and Byrd, in which, just before the expected resolution, a dissonance sharpens its blade and seems about to wreck things – and is then persuaded home, as it should be. I wish I could hear that English cadence again, the way I first properly heard it in Durham Cathedral. I was 11 years old. In my memory this is exactly what happened: the radiance of the music, the revelation of its beauty, the final cadences of the Tallis, and my happy glimpsing of my mother. But real life is a different matter.

Moving beyond the Charles Bukowski American lowlife cliche When Charles Bukowski died in San Pedro 20 years ago, the obituaries in the next day's papers typically began with some iteration of Time magazine's stock description of the writer as the "laureate of American lowlife." In the decades since, the drinking, brawling, gambling, whoring cliche has become so entrenched and widely propagated it can be hard to see Bukowski's words for his shadow. The "Barfly" legend, sprouted from the self-mythology Bukowski cultivated in countless quasi-autobiographical works including his celebrated movie screenplay and fed by his real-life drunken bouts of abusiveness, has only grown posthumously. Hordes of websites are devoted to Bukowskiana, his poems are recited in TV spots to sell bluejeans and Scotch, and a biopic written and directed by James Franco is due in theaters this year. In December, a Bukowski-themed bar, called Barkowski, opened in Santa Monica. Bukowski's long reign as a Los Angeles icon can lead us back to the old mythology.

Grand Mal At the end of 1997 I was thirty-two, living in Richmond, Virginia and in a relationship that was approaching its third anniversary. My boyfriend and I were happy enough, I thought. We shared a rented house, cooked meals; accumulated electronics, bad art and two dogs. Then one day I realized I wasn’t happy at all. A week later, my ex called and said we needed to meet. Something was afoot, I knew. We met in the food court at the mall (my idea; I thought the public setting would negate the possibility of an argument). And so we argued in that public place I’d thought would obfuscate arguing. Minutes later, barrelling down Monument Avenue in my pickup truck, I began to experience the mental flashes neurologists call auras. Auras are a symptom of temporal lobe epilepsy. I drove to work, couldn’t have told you where I’d come from, whether I’d stopped at the last three intersections or hit all the lights green. An hour into my shift, the awful scene in the mall came flooding back to me. No.

Mo Yan wins Nobel prize in literature 2012 The winner of the 2012 Nobel prize for literature is announced at the Swedish Academy in Stockholm Link to video: Mo Yan wins Nobel prize for literature Chinese author Mo Yan, who left school for a life working the fields at the age of 12, has become the first Chinese citizen ever to win the Nobel prize in literature, praised by the Swedish Academy for merging "folk tales, history and the contemporary" with "hallucinatory realism". The win makes Mo Yan the first Chinese citizen to win the Nobel in its 111-year history: although Gao Xingjian won in 2000, and was born in China, he is now a French citizen; and although Pearl Buck took the prize in 1938, for "her rich and truly epic descriptions of peasant life in China and for her biographical masterpieces", she is an American author. Born in 1955 to parents who were farmers, Mo Yan - a pseudonym for Guan Moye; the pen name means "don't speak" - grew up in Gaomi in Shandong province in north-eastern China.