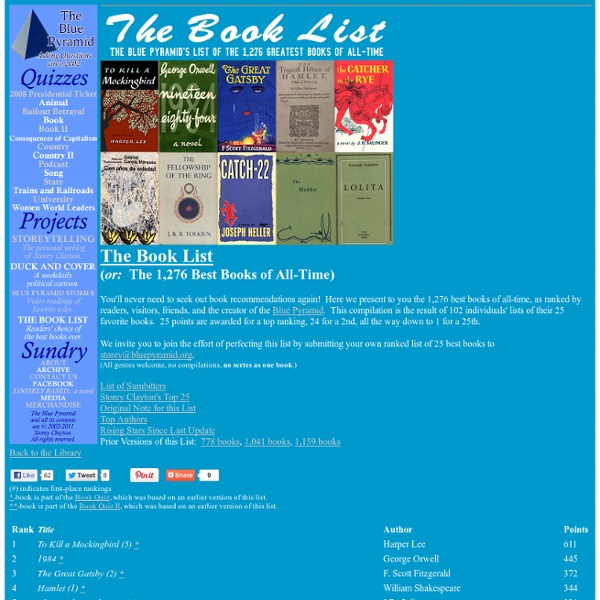 A Unified List of the Best 100 Novels « neilb This list was generated by merging 10 different ‘top 100′ lists from the UK, US, Australia and Canada, to see if the cream floated to the top. The lists are a mixture of public popularity and literary merit. Interestingly, only one book appeared on every list: it’s in first place here. Note that I merged lists from English-speaking countries, so there is undoubtedly a bias towards books originally written in English. Where possible, book titles are linked through to the Project Gutenberg free ebook. When the BBC ran The Big Read, I set myself a goal of reading all of the Big Read Top 100. An online search for other lists quickly revealed that certain books appear near the top of most lists (Great Expectations, for example), others vary widely (for example Ulysses), and some books only appear on one list (national favourites, such as Tim Winton’s excellent Cloudstreet, from Australia). The only editing of the list I’ve done is to collapse series down to a single entry, where appropriate.

John Cartan - 20 Strange and Wonderful Books 20. The Tolkien Reader by J. R. The works of J.R.R. As I grow older, it's his short stories I particularly value. Tolkien wrote this story to demonstrate his belief that fairy tales are for adults. Great Poems « Greatest Books of All Time » Life-Changing Arts A selection of great poems from centuries of brillant authors and poets. Whether you are new to the world of poetry and wish to savor it, or a well-versed poetry connoisseur, either way you will probably enjoy the classics of world poetry. The poems are sorted by vote. To vote for a poem, click on the left of it. Voting is possible once per day. Votes PoemAuthor IfRudyard Kipling EchoChristina Georgina Rossetti If you think the best poem of all times is not even on this list, by all means, let us know which poem it is and why you think it should be added. Get inspired.. inspire others.. Back to Greatest Books of All Time

UC Berkeley Summer Reading 2006 The World Is Flat: A Brief History of the Twenty-first CenturyThomas L. FriedmanNew York: Farrar, Straus and Giroux, 2005 Although the message can be boiled down into fewer pages, a future President should understand that technology has created the opportunity for anyone in the world to perform tasks that used to be limited by geography. It sounds good for the world; is it good for the U.S.? We are the leader in offshoring. Dave PattersonPardee Professor of Computer Science The Year of Magical ThinkingJoan DidionNew York: Knopf, 2005 This is a wonderful meditation on loss and grief, but also on a forty-year-long relationship between a man and a woman who spent hardly a day outside of each other's company. Charles FaulhaberProfessor, Spanish and PortugueseJames D. Life and FateVasilii Semenovich GrossmanNew York: Harper & Row, 1986, ©1985 This is the greatest Russian novel of the 20th century and one of the six or seven greatest works of fiction of the century in the Western canon. Why? G.

75 Books Every Writer Should Read Whether you want to make writing your career or just want to know how to improve your writing so that you can pass your college courses, there is plenty of reading material out there to help you get inspired and hone your skills. Here’s a collection of titles that will instruct you on just about every aspect of writing, from the basics of grammar to marketing your completed novel, with some incredibly helpful tips from well-known writers themselves as well. Writing Basics These books address things like structure, plot, descriptions and other basic elements of any story. The Power of Myth by Joseph Campbell and Bill Moyers: You can improve the quality of your writing by adding a mythical quality to them with advice and insight from this book. Advice from Authors Who better to give advice on writing than those who have made a name for themselves doing it? On Writing: A Memoir of the Craft by Stephen King: This is widely regarded as one of the best books for any aspiring author to read.

The Books That Changed Your Lives I have a feeling that many of these are favourite books rather than life-changing. Certainly I love "The Hitch-hikers Guide . Jared Diamond's book is very interesting but hardly life-changing. In my opinion "2001: A Space Odyssey" had a huge effect on the way people perceive the benefits of science, undermining the positive attitude created by the Apollo program. "1984" had the biggest effect on me, changing my view of government, communication and words. I have read but cannot recall much of "Zen ..." but you have inspired me to pick it up again and the two Dawkins books are waiting on my "to be read" pile. A syllabus and book list for novice students of science fiction literature I was going to say that Dune has to be on the list but considering that this is a list for beginners it may be a little dense for newcomers. Is world building in general being left for the 200 level course? @go-falcons: As opposed to PK Dick or Gibson? Neuromancer, for as much as I love it, takes a bit of a mental adjustment to absorb the density of that writing. Bradbury was also mentioned as being more of a 101 writer... @SupaChupacabra: It's not for young readers - it's more of a university survey course.

50+ Open Courseware Writing Classes from the World's Leading Universities Although technical courses tend to get more attention, the availability of writing courses online is impressive. Whether you want to learn how to write for business or just brush up on grammar, you're sure to find what you're looking for. We've compiled more than 50 of these classes, and they're open for anyone to take. Introductory Courses Get beginning writing knowledge from these courses. Introduction to Writing: Academic Prose: In this course, you'll learn how to write for an academic audience. Grammar & Language Use these courses to perfect your writing mechanics. English Grammar in Context: This course will teach you about the importance of grammar, features of speech, and more. Research Whether you're researching for pleasure, work, or school, these courses will steer you in the right direction. Intermediate Writing: Research Writing in a Persuasive Mode: In this 16-week course, you'll learn how to use critical reading and thinking skills to create persuasive research writing.