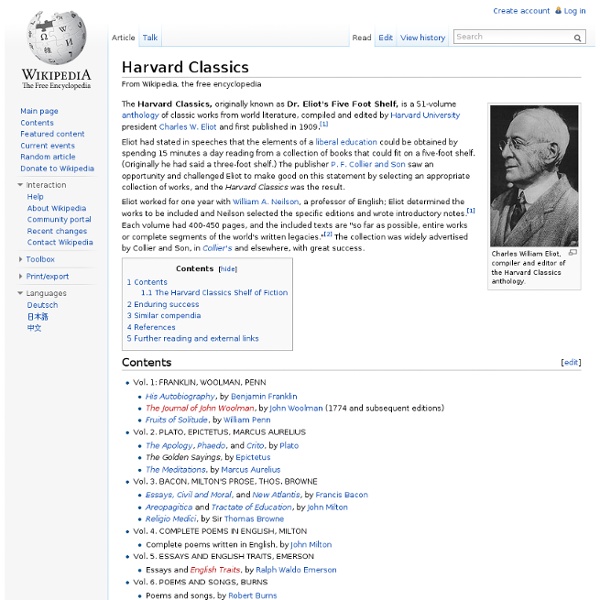 Charles William Eliot, compiler and editor of the Harvard Classics anthology. The Harvard Classics, originally known as Dr. Eliot's Five Foot Shelf, is a 51-volume anthology of classic works from world literature, compiled and edited by Harvard University president Charles W. Eliot and first published in 1909.[1] Eliot had stated in speeches that the elements of a liberal education could be obtained by spending 15 minutes a day reading from a collection of books that could fit on a five-foot shelf. Eliot worked for one year with William A. Contents[edit] The Harvard Classics Shelf of Fiction[edit] The Harvard Classics Shelf of Fiction was selected by Charles W. Enduring success[edit] As Adam Kirsch, writing for Harvard magazine in 2001, notes, "It is surprisingly easy, even today, to find a complete set of the Harvard Classics in good condition. Similar compendia[edit] References[edit] Further reading and external links[edit]

Western canon Origins[edit] The process of listmaking—defining the boundaries of the canon—is endless. The philosopher John Searle has said: "In my experience there never was, in fact, a fixed 'canon'; there was rather a certain set of tentative judgments about what had importance and quality. One of the notable attempts at compiling an authoritative canon in the English-speaking world was the Great Books of the Western World program. An earlier attempt, the Harvard Classics (1909), was promulgated by Harvard University president Charles W. ... Debate[edit] Defenders maintain that those who undermine the canon do so out of primarily political interests, and that such criticisms are misguided and/or disingenuous. One of the main objections to a canon of literature is the question of authority—who should have the power to determine what works are worth reading and teaching? Works[edit] Works which directly address the canon (both for and against): Examples[edit] Chronological brackets: See also[edit]

In Which These Are The 100 Greatest Writers Of All Time The 100 Greatest Writers of All Time by WILL HUBBARD and ALEX CARNEVALE Other lists of this kind have been attempted, none very successfully. We would like to stress that there is a crucial difference between "an important writer" and "a great writer"; the latter is at this time our sole interest. 100. Prose stylist nonpareil, he addressed the dichotomy of race, the loneliness of existence. 99. The gestamtkunstwerk ('total work of art') was all the rage in Europe early in the last century, but Balzac was on the case almost a hundred years before. 98. The greatest artist Poland would ever spawn, Milosz was still composing vital poetry until his death in 2004. 97. When we speak of 'wit' in the theater we owe a debt to G. 96. Anti-semite? 95. We prefer to keep our religion, poetry, and booze in separate containers, but we know a lot of ex-hippie poets who swear by this guy. 94. No writer so little acclaimed in the first part of his life lived a second one in literary style in the West. 93.

The Novel 100: The 100 Greatest Novels of All Time Multiple Listings:9 authors wrote two of the books listed on TIME Magazine's list of the best English-language novels published since 1923: Evelyn Waugh (Brideshead Revisited; A Handful of Dust) George Orwell (1984; Animal Farm) Graham Greene (The Heart of the Matter; The Power and the Glory) Philip Roth (American Pastoral; Portnoy's Complaint) Saul Bellow (The Adventures of Augie March; Herzog) Thomas Pynchon (The Crying of Lot 49; Gravity's Rainbow) Virginia Woolf (Mrs. Dalloway; To the Lighthouse) Vladimir Nabokov (Lolita; Pale Fire) William Faulkner (Light in August; The Sound and the Fury) Authors on Two Separate ListsTIME Magazine's list of "100 Best Movies" released since 1923 is a companion to TIME Magazine's list of "100 Best Novels" (written in English) published since 1923. Notes about how the list was created Excerpts from: Richard Lacayo, "How We Picked the List" ( viewed 31 October 2005):

Great books The great books are those books that are thought to constitute an essential foundation in the literature of Western culture. Specified sets of great books typically range from 100-150, though they differ according to purpose and context. For instance, some lists are built to be read by undergraduates in a college semester system (130 books, Torrey Honors Institute),[1] some are compiled to be sold as a single set of volumes (500 books, Mortimer Adler), while some lists aim at a thorough literary criticism (2,400 books, Harold Bloom).[2] Concept[edit] The great books are those that tradition, and various institutions and authorities, have regarded as constituting or best expressing the foundations of Western culture (the Western canon is a similar but broader designation); derivatively the term also refers to a curriculum or method of education based around a list of such books. Mortimer Adler lists three criteria for including a book on the list: Origin[edit] Program[edit] United States Asia

Great Books of the Western World The Great Books (second edition) Great Books of the Western World is a series of books originally published in the United States in 1952 by Encyclopædia Britannica Inc. to present the Great Books in a single package of 54 volumes. The series is now in its second edition and contains 60 volumes. The original editors of the series chose three criteria for inclusion: a book must be relevant to contemporary issues, and not only important in its historical context; it must reward rereading; and it must be a part of "the great conversation about the great ideas," relevant to at least 25 of the 102 great ideas identified by the editors. History[edit] After debates about what to include and how to present it, with an eventual budget of $2,000,000, the project was ready. Sales were initially poor. With the advent of the Internet and the proliferation of E-book readers, many of these texts are available online.[4] Volumes[edit] Volume 1 The Great Conversation Volume 2 Volume 3 Volume 4 Volume 5 Volume 6

The 100 Most Influential Books Ever Written (book) The 100 Most Influential Books Ever Written: The History of Thought from Ancient Times to Today (1998) is a book of intellectual history written by Martin Seymour-Smith, a British poet, critic, and biographer.[1] The list includes the books such as Upanishads, Hebrew Bible, I Ching, Kabbalah, Candide and The World as Will and Idea. See also[edit] References[edit] Jump up ^ Seymour-Smith, Martin (1998). The 100 most influential books ever written : the history of thought from ancient times to today. 75 Books Every Writer Should Read Whether you want to make writing your career or just want to know how to improve your writing so that you can pass your college courses, there is plenty of reading material out there to help you get inspired and hone your skills. Here’s a collection of titles that will instruct you on just about every aspect of writing, from the basics of grammar to marketing your completed novel, with some incredibly helpful tips from well-known writers themselves as well. Writing Basics These books address things like structure, plot, descriptions and other basic elements of any story. The Power of Myth by Joseph Campbell and Bill Moyers: You can improve the quality of your writing by adding a mythical quality to them with advice and insight from this book. Advice from Authors Who better to give advice on writing than those who have made a name for themselves doing it? On Writing: A Memoir of the Craft by Stephen King: This is widely regarded as one of the best books for any aspiring author to read.