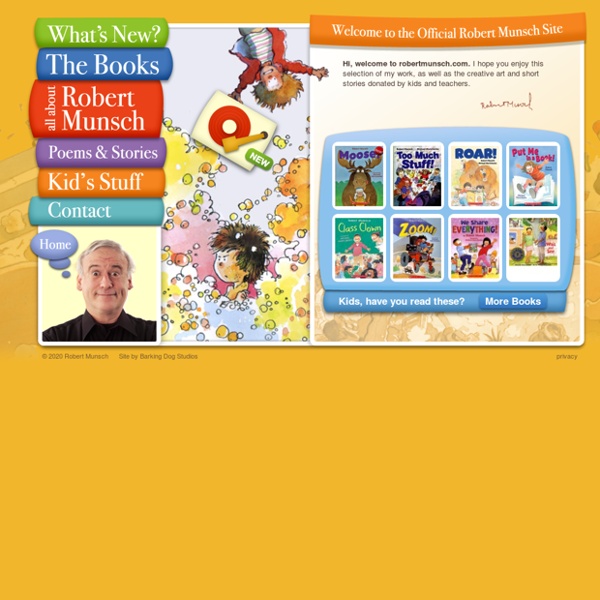 The Enid Blyton Society Please step carefully — there are literally thousands of books and magazines here, going right back to Enid's early days. How many books do you think she wrote? How many of her short stories, plays, poems and non-fiction articles were published? Authors and Illustrators of Children's Books Where Teachers Come First bookwizardMy Book Lists GO Instant access to reproducibles

Brandon Mull Attention Apprentice Caretakers! You may have read about centaurs and satyrs, fairies and fog giants. But have you actually seen them? Ann Brashares biography, plus links to book reviews and excerpts. Ann Brashares Biography Ann Brashares grew up in Chevy Chase, Maryland with her three brothers and attended a Quaker school in the DC area called Sidwell Friends. She studied Philosophy at Barnard College, part of Columbia University in New York City. Expecting to continue studying philosophy in graduate school, Ann took a year off after college to work as an editor, hoping to save money for school. Loving her job, she never went to graduate school, and instead, remained in New York City and worked as an editor for many years. Ann made the transition from editor to full-time writer with her first novel, The Sisterhood of the Traveling Pants.

Jason Fry I’m the author of The Jupiter Pirates space-fantasy saga for young adults, published by HarperCollins. The series begins with The Jupiter Pirates: Hunt for the Hydra, then continues with Curse of the Iris. The third novel, The Rise of Earth, is on the way … with more to come. The Jupiter Pirates is part high-seas adventure and part space-age epic — a saga about a solar system on the brink of war and one family caught in the middle of it. It’s technically a middle-grade book (for ages 8 to 12) but I promise older readers will like it too. Here’s the elevator pitch: Nick Butterworth books - Children's Author on Lovereading4kids.co.uk Nick Butterworth was born in Kingsbury, North London in 1946, but moved to Romford in Essex with his parents at the age of three. They moved to run a sweet shop, so Nick found himself fulfilling every child's sugar-coated dream of growing up right inside the proverbial chocolate factory. Having intended to go to art college after leaving school, Nick decided to take a job as a typographic designer in the printing department of the National Children's Home at the last minute instead. He went on to work for several major London design consultancies before moving into freelance graphics. He has also worked as a television presenter on the TV-AM children's programme Rub-a-Dub-Tub and produced a regular illustrated story called Upney Junction for the Sunday Express magazine.

Mem Fox Picture me flat on the floor in a star shape: that’s where I am. I’ve been working for many months with my website designers (massive applause for Enee Solutions) to update the site and make it as friendly and fascinating as possible. I hope you’ll love it. It will be updated every four weeks. I hope you’re having hide-and-seek fun with my latest book: YOO HOO, LADYBIRD! Bob Graham - Authors & Illustrators - Welcome to Walker Books Australia Bob Graham has written and illustrated many children’s picture books. He was born in Sydney, and studied at the Julian Ashton Art School. His books are well known for their simplicity and humour, told from children’s perspectives, including “Oscar’s Half Birthday,” “Buffy,” ( Smarties Book prize silver award winner) and “Let’s Get a Pup” ( shortlisted for the 2002 Kate Greenaway medal; winner Boston Globe-Horn book award.) He won the 2000 Smarties Gold medal for “Max”, the 2003 Kate Greenaway medal for “Jethro Byrde,” and the Australian Children’s Book of the Year Award four times.

About The Author Barbara Park was best-known as the creator and author of the New York Times bestselling Junie B. Jones series, the stories of an outrageously funny kindergartener who has kept kids (and their grownups) laughing—and reading—for over two decades. Published by Random House Books for Young Readers, the series has sold over 60 million copies in North America alone, has been translated into multiple languages and is a beloved and time-honored staple in elementary school classrooms around the world. The series was consistently a #1 New York Times bestseller, spending over 180 weeks on the list, and Barbara and her books were profiled in such national outlets as Time, Newsweek, USA Today, The New York Times, and Today. Park died on Friday, November 15, 2013 after fighting ovarian cancer heroically for seven and a half years. Barbara Park arrived at the writing profession through an indirect route.

aaron blabey books Aaron Blabey's life doesn't make any sense. He is best known for his well-loved children's picture books for which he has won many awards including a Children's Book Council of Australia - Book of the Year Award, a NSW Premiers Literary Award for Children's Literature, a KOALA Award, a YABBA Award and a Children's Peace Literature Award. He's also been the National Literacy Ambassador and is a proud ambassador for the Alannah and Madeline Foundation. michael gerard bauer – author Michael Gerard Bauer was born and lives in Brisbane Australia. In 2000 he resigned from his full-time position as an English/Economics teacher to pursue his dream of becoming a writer. In 2004 his first YA novel The Running Man was published to great acclaim.