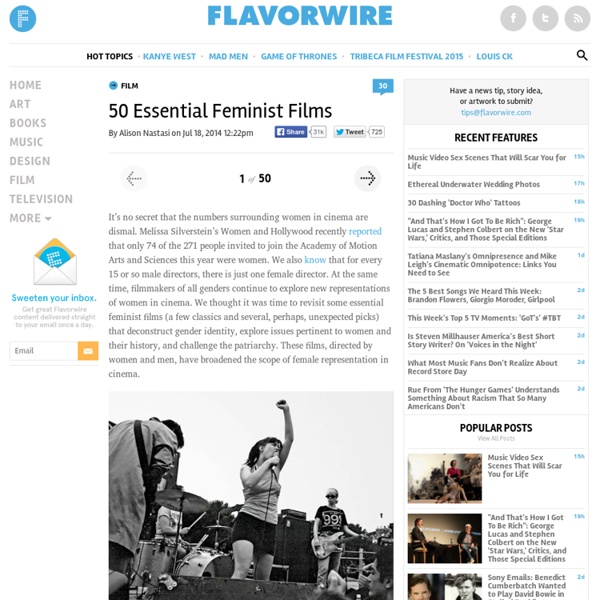 It’s no secret that the numbers surrounding women in cinema are dismal. Melissa Silverstein’s Women and Hollywood recently reported that only 74 of the 271 people invited to join the Academy of Motion Arts and Sciences this year were women. We also know that for every 15 or so male directors, there is just one female director. At the same time, filmmakers of all genders continue to explore new representations of women in cinema. We thought it was time to revisit some essential feminist films (a few classics and several, perhaps, unexpected picks) that deconstruct gender identity, explore issues pertinent to women and their history, and challenge the patriarchy. These films, directed by women and men, have broadened the scope of female representation in cinema. 50. An intimate portrait of feminist art-punk activist icon Kathleen Hanna, the frontwoman of Bikini Kill, Le Tigre, and The Julie Ruin, and one of the founders of the riot grrrl movement of the 1990s.

Feminist Science Fiction Is the Best Thing Ever Hello, ladies. Are you into science fiction? Consider The Female Man, a 1970 science fiction novel by the late Joanna Russ, which takes place in four worlds inhabited by four different women who share the same genotype and whose names all start with the letter J. There’s Jeannine Dadier, who lives in 1969 in an America that never recovered from the Great Depression; Joanna, also in 1969, but in an America like ours; Janet Evason, an Amazonian beast who lives in an all-female world called Whileaway; and Alice Reasoner, or “Jael,” a warlord from a future where women and men have been launching nukes at each other for decades. The first time I read The Female Man, I felt like the hotel room carpeting had been ripped out from beneath my feet, revealing a glittering intergalactic parquet that had somehow been there all along. Those were boy stories.

Geena Davis' Two Easy Steps to Make Hollywood Less Sexist (Guest Column) This story first appeared in The Hollywood Reporter's Women in Entertainment Power 100 issue. I never intended to become a data head. I could never have predicted it would play such an important role in my life. Yet here we are: My Institute on Gender in Media has sponsored the largest amount of research ever done on gender depictions in media, covering a 20-year-plus span. I'll give you the basics as to how I got here, then we'll get to the fun part. “No means yes, yes means anal!”: This new film will change how you think about rape culture There is nothing subtle about “The Hunting Ground,” a new documentary about sexual violence on campus. The film starts with a montage of elated young people finding out that they are officially college bound. Happy tears are cried. Proud parents exchange hugs. Director Kirby Dick and producer Amy Ziering, the team behind “The Invisible War,” are setting you up to knock you down.

Film noir Film noir (/fɪlm nwɑːr/; French pronunciation: ​[film nwaʁ]) is a cinematic term used primarily to describe stylish Hollywood crime dramas, particularly such that emphasize cynical attitudes and sexual motivations. Hollywood's classical film noir period is generally regarded as extending from the early 1940s to the late 1950s. Film noir of this era is associated with a low-key black-and-white visual style that has roots in German Expressionist cinematography. Many of the prototypical stories and much of the attitude of classic noir derive from the hardboiled school of crime fiction that emerged in the United States during the Great Depression. The term film noir, French for "black film" (literal) or "dark film" (closer meaning),[1] first applied to Hollywood films by French critic Nino Frank in 1946, was unrecognized by most American film industry professionals of that era.[2] Cinema historians and critics defined the category retrospectively. Problems of definition[edit]

Linda Williams (film scholar) Linda Williams (born December 18, 1946) is a professor of film studies in the departments of Film Studies and Rhetoric at University of California, Berkeley. Williams graduated from University of California, Berkeley with a B.A in Comparative Literature in 1969, and then gained a PhD at the University of Colorado for her dissertation subsequently published as Figures of Desire: A Theory and Analysis of Surrealist Film.[1] Her main academic areas of interest are; film history, film genre, melodrama, pornography, feminist theory and visual culture; all with an emphasis on women, gender, race, and sexuality.[1] With respect to film genres, she argues that horror, melodrama, and pornography all fall into the category of "body genres", since they are each designed to elicit physical reactions on the part of viewers. Figures of Desire: A Theory and Analysis of Surrealist Film, University of Illinois Press, 1981.

The Inclusive Fantasy World of Pathfinder Pathfinder #5 arrived in stores Wednesday. It’s an important issue in our first story arc and includes something I wanted to post a few extra thoughts about. The fact that it’s also Valentine’s Day today makes it extra-appropriate. Another Reason The Hunger Games Is Awesome: Katniss Is Taller Than Peeta - Ashley Fetters Like the first Hunger Games film, Catching Fire has a refreshingly unflustered, no-big-deal attitude toward the fact that Jennifer Lawrence is taller than her male costar. In the wintry opening scenes of Catching Fire, the second film installment of the Hunger Games series, newly minted celebrity Katniss Everdeen (Jennifer Lawrence) tries to pose for a photo with her co-Hunger Games champion and putative boyfriend, Peeta Mellark (Josh Hutcherson). She stumbles into the snow at first, but then she dusts herself off, rises, and begins waving to the photographers, arm in arm with Peeta. The camera zooms out to a neutral angle, giving audiences a sudden, somewhat startling reminder that oh, that’s right—Katniss is slightly taller than Peeta. To some people, this may seem like a tiny or easily missed detail; in any case, it’s never even commented upon in the first Hunger Games film or the second. “On the count of three?”