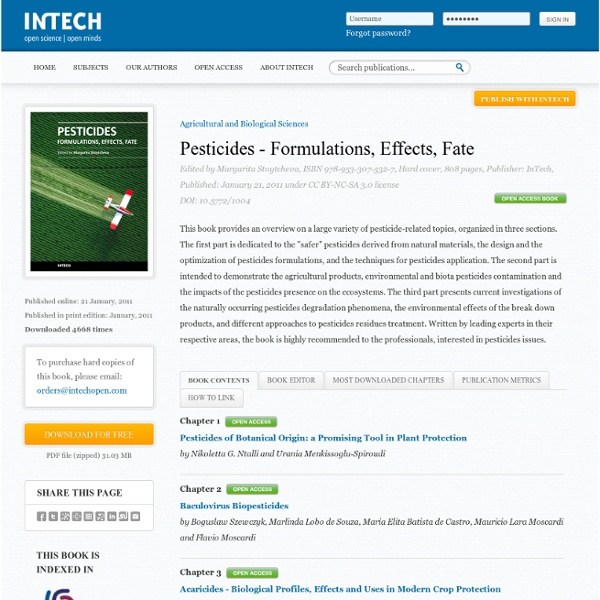 Edited by Margarita Stoytcheva, ISBN 978-953-307-532-7, 808 pages, Publisher: InTech, Chapters published January 21, 2011 under CC BY-NC-SA 3.0 licenseDOI: 10.5772/1004 This book provides an overview on a large variety of pesticide-related topics, organized in three sections. The first part is dedicated to the "safer" pesticides derived from natural materials, the design and the optimization of pesticides formulations, and the techniques for pesticides application. The second part is intended to demonstrate the agricultural products, environmental and biota pesticides contamination and the impacts of the pesticides presence on the ecosystems. The third part presents current investigations of the naturally occurring pesticides degradation phenomena, the environmental effects of the break down products, and different approaches to pesticides residues treatment. Related:  Pesticides et santé des végétaux en Chine • Références anglophones

PUBARTICLES 19/09/11 Pesticide Export and Import Rise in July 2011 By ccminternational : A how to tutorial about pesticide, flurorine, glyphosate, [+]Business with step by step guide from ccminternational. [^] According to the statistic data from China National Bureau of Statistics (CNBS), China's pesticide output in July 2011 reached 214,530 tonnes, up 9.5% year on year. Total pesticide output of the seven largest pesticide production provinces in China reached 172,395 tonnes during this period, accounting for 80.36% of the total output in July 2011, according to CCM’s latest issue of Crop Protection China News. And the volume and value of export and import all witness increase respectively in July 2011. Export China, as a large pesticide production country in the world, greatly relies on pesticide foreign trade; its pesticide dependency degree of foreign trade reached 80%. In July 2011, China totally exported pesticide of 75,000 tonnes, up 50.9% year on year. CCM International Ltd. Related Answers & Tutorials

PEER 13/10/11 Pesticides pollute European waterbodies more than previously thought 13 October 2011, Water, UFZ Pesticides are a bigger problem than had long been assumed. This is the conclusion of a study in which scientists analysed data on 500 organic substances in the basins of four major European rivers. It was revealed that 38 per cent of these chemicals are present in concentrations which could potentially have an effect on organisms. River Elbe in Germany. Most of the substances classified as a risk to the environment in the study were pesticides; the majority of these are not on the European list of priority substances which have to be monitored regularly. The aim of the EU Water Framework Directive is that surface water and groundwater bodies should reach a good environmental and chemical status by 2015. An important contribution to this has now been made by a study completed by the scientists of the Helmholtz Centre for Environmental Research (UFZ) together with colleagues in France, Slovakia, Belgium and Spain. Publication Further information: Dr. Links:

ECOTROPE 12/08/11 Flame Retardants And Pesticides Make Lousy Fish Food In The Columbia River Scientists with the U.S. Geological Survey—lots of scientists—have been studying how contaminants work their way through the food web of the Columbia River. We’re talking PCBs, flame retardants, pesticides, toulene—nasty chemicals known as endocrine disrupting compounds. Using a foodweb model, the researchers tested insects, fish that eat the insects, osprey that eat the fish and invertebrates that live in the river’s sediments and dine on the leftovers. The study results are not in, but scientists Elena Nilsen and Jennifer Morace shared some of their observations this week. The researchers have been trying to pinpoint a single chemical or a suite of chemicals that could be causing such problems, says Matthew Mesa, a scientist at the Columbia River Research Lab in Cook, Washington. Far better to hear it from the scientist than me, so check out Nilsen and Morace as they explain their project in this video. older « Getting the community involved in climate action Comments

On average, 4% of the tested food in 2007 exceeded the permitted maximum residue levels (MRL). In fruit and vegetables this value was almost 5%. This is the result of the newest report of the European Food Safety Authority (EFSA) about tests conducted in 29 EU and EFTA member states. The results are alarming. Nine products where examined in detail in the EU coordinated control programme: peaches, strawberries, lettuce, apples, rye or oats, head cabbage, leek and tomatoes. For the first time the report was issued by EFSA and not by the EU-General Direction for Health and Consumer Protection. For this reason the display of the results for 2007 on this website has to be altered in comparison to previous years. Click a country for more specific information What is a pesticide residue and why do they occur? Pesticide Monitoring Reports top

BRGM/RP-52897-FR - Pesticides in European groundwaters : detailed study of representative aquifers and simulation of possible ev Executive summary for EU citizens The transport of the pesticides from the soil surface to and in groundwater was monitored in six aquifers representative of European groundwater resources (2 in France, 1 in Germany, 1 in Switzerland, 1 in Denmark and 1 in the Netherlands). Results show that there is a potential for a rapid transport of pesticides to depth under specific conditions. The pattern of detection of pesticides in groundwater varied according to the compound and the aquifer considered. Where detection occured, it was limited to the first few weeks following application to agricultural crops whereas in some others, the compound was detected throughout the monitoring periods. Mathematical tools enabling the simulation of pesticide fate from the soil surface to and in groundwater were developed or improved within the scope of the project. The models were tested against the data collected at the various study sites.

NATURAL NEWS 09/02/11 New chemical pesticides now being used on fish farms (NaturalNews) New pesticides are increasingly being introduced into Atlantic salmon farms, causing outrage among environmentalists and lobster fishers. Widespread use of pesticides has rendered sea lice -- which infest farmed salmon due to their cramped living conditions -- immune to the most popular varieties, leading both U.S. and Canadian regulators to start approving new, more toxic poisons. Because lice are crustaceans, these poisons may be especially harsh on lobsters and other related sea life. Indeed, lobster fishers and environmentalists have complained that AlphaMax (deltamethrin), a pesticide recently approved in Canada, has been causing the death of sea life. The research exposed lobsters to sea water outside the range of an AlphaMax plume, to sea water directly within an AlphaMax plume, or to sea water just outside a pen where salmon treatment was taking place. Cypermethrin, the pesticide implicated in that case, has been approved for use in U.S. waters.

J Agric Food Chem. 2012 Mar 28;60(12):2982-8. Residues of currently and never used organochlorine pesticides in agricultural soi The desire for less pesticide residues on crops and a reduction in the types of agro-chemicals available to farmers after recent EU legislation is being addressed by new research at SCRI. SCRI is one of the partners in the EU PURE project (Pesticide Use-and-risk Reduction in European farming systems with Integrated Pest Management) which will develop integrated pest and disease management techniques for major EU crops. Integrated pest and disease management (IPDM) is a holistic, systems-based approach, integrating several strategies to reduce weeds, insect pests and diseases while minimising the use of pesticide treatments. PURE is the biggest agricultural project funded by the EU under the Framework 7 programme with a total value of €12 million. "With the reduction in available pesticides, growers will have to look to different and more innovative methods of managing crops and the PURE project will support that move" - Dr Graham Begg, SCRI Notes to editors More information from: or

INTECH 30/01/13 Insecticides - Development of Safer and More Effective Technologies Edited by Stanislav Trdan , ISBN 978-953-51-0958-7, Hard cover, 548 pages, Publisher: InTech, Chapters published January 30, 2013 under CC BY 3.0 license DOI: 10.5772/3356 This book contains 20 chapters about the impact, environmental fate, modes of action, efficacy, and non-target effects of insecticides. The chapters are divided into 7 parts. Part 1 covers the non-target effects of insecticides, whereas part 2 is dedicated to integrated methods for pest control, in which insecticides are an important element for diminishing the populations of insect pests. Part 3 includes chapters about the non-chemical alternatives to insecticides, such as metabolic stress and plant extracts.