Cognitive Science. COVID-19. Richard Feynman on Scientific Method (1964) No, senator, science can’t do away with models. On Friday, Texas Senator John Cornyn took to Twitter with some advice for scientists: models aren't part of the scientific method. 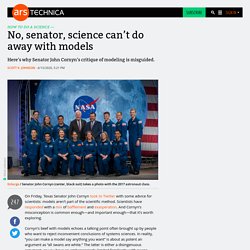 Calculate your BMI, correctly rated according to age and sex. Your result. Low moderate high very high health risk This SBMI chart shows your BMI value and its age-dependent significance for the health. 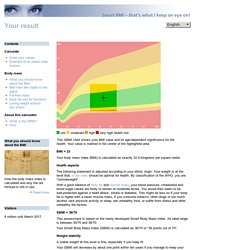 Your value is marked in the center of the highlighted area. Your body mass index (BMI) is calculated as exactly 22.9 kilograms per square meter. Health aspects The following statement is adjusted according to your ethnic origin: Your weight is at the level that, in our view, should be optimal for health. With a good balance of body fat and muscle mass, your blood pressure, cholesterol and blood sugar values are likely to remain at moderate levels. This assessment is based on the newly developed Smart Body Mass Index.

Your Smart Body Mass Index (SBMI) is calculated as 36/70 or "36 points out of 70". Weight stability A stable weight at this level is fine, especially if you keep fit. Total Solar Eclipse 2017 - Path Through the United States. How to increase serotonin in the human brain without drugs. This Image Can Trick Your Brain And Make You See It In Color. Perception is a fickle thing. 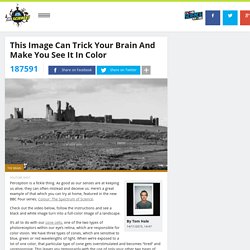 As good as our senses are at keeping us alive, they can often mislead and deceive us. Here’s a great example of that which you can try at home, featured in the new BBC Four series, Colour: The Spectrum of Science. Check out the video below, follow the instructions and see a black and white image turn into a full-color image of a landscape. Richard A. Muller: The Case Against Global-Warming Skepticism. Are you a global warming skeptic? 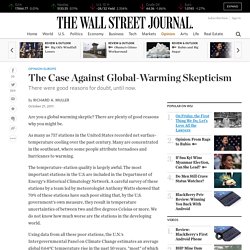 There are plenty of good reasons why you might be. As many as 757 stations in the United States recorded net surface-temperature cooling over the past century. Many are concentrated in the southeast, where some people attribute tornadoes and hurricanes to warming. The temperature-station quality is largely awful. The most important stations in the U.S. are included in the Department of Energy's Historical Climatology Network. Retractions: Righting the wrongs of science. If the results from an experiment look too good to be true, look again. 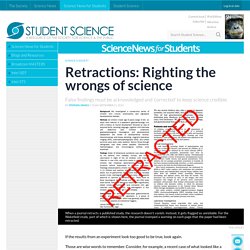 Science Isn’t Broken. Scientists Show Future Events Decide what Happens in the Past. [DIGEST: Digital Journal, Science Daily, Nature Physics] We all agree, past events can affect the present. 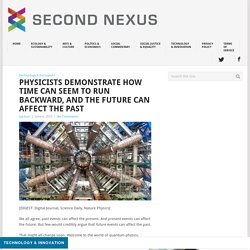 Mathematics as the language of physics. What is known about tachyons, theoretical particles that travel faster than light and move backward in time? Is there scientific reason to think they really exist? Raymond Y. 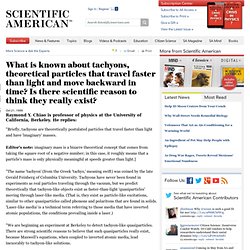 Chiao is professor of physics at the University of California, Berkeley. He replies: "Briefly, tachyons are theoretically postulated particles that travel faster than light and have 'imaginary' masses. Editor's note: imaginary mass is a bizarre theoretical concept that comes from taking the square root of a negative number; in this case, it roughly means that a particle's mass is only physically meaningful at speeds greater than light.]

Looking for a sky almanac? EarthSky recommends … Many people want to know the rising and setting times for the sun, moon and planets in their sky. 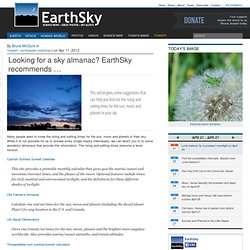 While it is not possible for us to answer every single inquiry individually, we can direct you to to some wonderful almanacs that provide this information. The Science of Why We Don't Believe Science. Climategate had a substantial impact on public opinion, according to Anthony Leiserowitz, director of the Yale Project on Climate Change Communication. 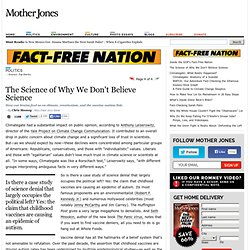 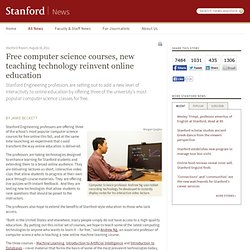 Stanford Engineering professors are offering three of the school’s most popular computer science courses for free online this fall, and at the same time launching an experiment that could transform the way online education is delivered. Galileo's Experiments. Cornering the Higgs A professor from one of the CERN teams explains what this experimental result means for the future of physics. Elements in the Ocean Marine geochemist Catherine Jeandel has bottled the world's oceans to decipher their past—and future.