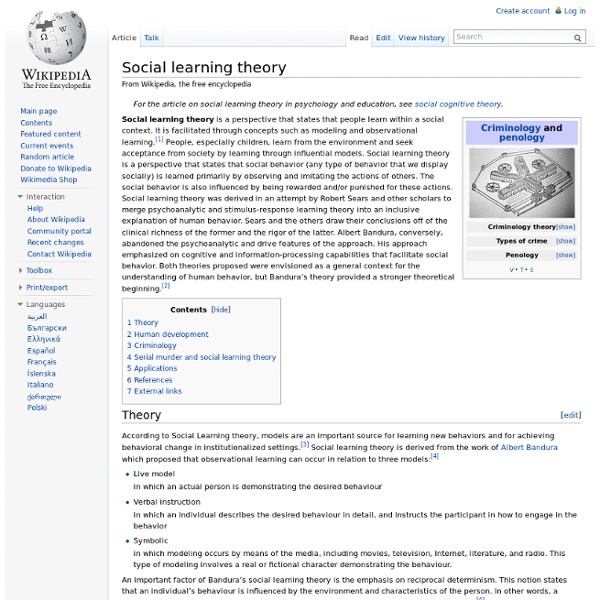 is a perspective that states that people learn within a social context. It is facilitated through concepts such as modeling and observational learning. [ 1 ] [ edit ] Theory According to Social Learning theory, models are an important source for learning new behaviors and for achieving behavioral change in institutionalized settings. [ 2 ] Social learning theory is derived from the work of Albert Bandura which proposed that observational learning can occur in relation to three models: [ 3 ] • Live model – in which an actual person is demonstrating the desired behaviour • Verbal instruction – in which an individual describes the desired behaviour in detail, and instructs the participant in how to engage in the behavior • Symbolic – in which modeling occurs by means of the media, including movies, television, Internet, literature, and radio. An important factor of Bandura’s social learning theory is the emphasis on reciprocal determinism. 1. 2. 3. 4. [ edit ] Criminology [ edit ] Applications Related:  Psychology 102

Repertory grid Introduction[edit] The repertory grid is a technique for identifying the ways that a person construes (interprets/ gives meaning to) his or her experience. It provides information from which inferences about personality can be made, but it is not a personality test in the conventional sense. It is underpinned by the Personal Construct Theory developed by George Kelly first published in 1955. A grid consists of four parts: A Topic: it is about some part of the person's experienceA set of Elements, which are examples or instances of the Topic. Constructs are regarded as personal to the client, who is psychologically similar to other people depending on the extent to which s/he would tend to use similar constructs, and similar ratings, in relating to a particular set of elements. The client is asked to consider the elements three at a time, and to identify a way in which two of the elements might be seen as alike, but distinct from, contrasted to, the third. Using the Repertory Grid[edit]

Minds on Fire: Open Education, the Long Tail, and Learning 2.0 (EDUCAUSE Review Â© 2008 John Seely Brown and Richard P. Adler. Text illustrations Â© 2008 Susan E. Haviland. EDUCAUSE Review, vol. 43, no. 1 (January/February 2008): 16â€“32 John Seely Brown and Richard P. John Seely Brown is a Visiting Scholar and Advisor to the Provost at the University of Southern California (USC) and Independent Co-Chairman of a New Deloitte Research Center. Comments on this article can be posted to the web via the link at the bottom of this page. More than one-third of the worldâ€™s population is under 20. â€”Sir John Daniel, 1996 The world has become increasingly â€œflat,â€ as Tom Friedman has shown. If access to higher education is a necessary element in expanding economic prosperity and improving the quality of life, then we need to address the problem of the growing global demand for education, as identified by Sir John Daniel.3 Compounding this challenge of demand from college-age students is the fact that the world is changing at an ever-faster pace. Social Learning vs.

George Kelly (psychologist) George Kelly (born George Alexander Kelly; April 28, 1905 – March 6, 1967) was an American psychologist, therapist, educator and personality theorist. He is considered the father of cognitive clinical psychology and best known for his theory of personality, Personal Construct Psychology. Kelly's fundamental view of personality was that people are like naive scientists who see the world through a particular lens, based on their uniquely organized systems of construction, which they use to anticipate events. But because people are naive scientists, they sometimes employ systems for construing the world that are distorted by idiosyncratic experiences not applicable to their current social situation. A system of construction that chronically fails to characterize and/or predict events, and is not appropriately revised to comprehend and predict one's changing social world, is considered to underlie psychopathology (or mental illness.) Guilt- Guilt is dislodgment from one's core constructs.

bozarthzone Behaviorism Behaviorism (or behaviourism), is the science of behavior that focuses on observable behavior only,[1] it is also an approach to psychology that combines elements of philosophy, methodology, and theory.[2] It emerged in the early twentieth century as a reaction to "mentalistic" psychology, which often had difficulty making predictions that could be tested using rigorous experimental methods. The primary tenet of behaviorism, as expressed in the writings of John B. Watson, B. F. Skinner, and others, is that psychology should concern itself with the observable behavior of people and animals, not with unobservable events that take place in their minds.[3] The behaviorist school of thought maintains that behaviors as such can be described scientifically without recourse either to internal physiological events or to hypothetical constructs such as thoughts and beliefs.[4] Versions[edit] Two subtypes are: Definition[edit] Experimental and conceptual innovations[edit] Relation to language[edit]

Revised NEO Personality Inventory Personality dimensions[edit] Name[edit] The original version of the measurement, published in 1978, was the Neuroticism-Extroversion-Openness Inventory (NEO-I). This version only measured three of the Big Five personality traits. A mnemonic device for the five primary factors is the acronym "OCEAN," or alternatively "CANOE". History[edit] In the 1970s, Costa and McCrae were researching how personality changed with age. Throughout the mid- to late-1990s, Costa and McCrae began to realize that some items on the NEO-PI-R were out-dated or too difficult to understand for participants. Forms and administration[edit] In the most recent publication, there are two forms for the NEO, one for self-report (form S) and one for observer rating (form R). The manual reports that administration of the full version should take between 30 and 40 minutes. Reliability of the NEO[edit] Test retest reliability of the NEO PI-R is also good. Other research has shown acceptable test-retest reliability.

Building a Performance Ecosystem By combining the power of the human brain with technology in a way that facilitates work, collaboration and communication, leaders can turn learning into multifaceted performance support. The competitive landscape is more dynamic than ever, and the defining success factors have shifted. Things are moving faster, and organizations have to be more nimble, responding to changes in their audiences, competitors and the context of work. Former Thomson Reuters CLO Charles Jennings highlights the 70:20:10 framework for thinking about organizational learning: 10 percent of what we need to know to do our jobs comes from courses, 20 percent from mentoring or coaching, and 70 percent is learned on the job through independent initiative. Lots of the opportunities to improve come through the network, through the people we learn with and from. The Coherent OrganizationThis is called the coherent organization.

Free will Though it is a commonly held intuition that we have free will,[3] it has been widely debated throughout history not only whether that is true, but even how to define the concept of free will.[4] How exactly must the will be free, what exactly must the will be free from, in order for us to have free will? Historically, the constraint of dominant concern has been determinism of some variety (such as logical, nomological, or theological), so the two most prominent common positions are named incompatibilist or compatibilist for the relation they hold to exist between free will and determinism. In Western philosophy[edit] The underlying issue is: Do we have some control over our actions, and if so, what sort of control, and to what extent? On one hand, humans have a strong sense of freedom, which leads us to believe that we have free will.[13][14] On the other hand, an intuitive feeling of free will could be mistaken.[15][16] Incompatibilism[edit] Using T, F for "true" and "false" and ? [edit]

Clark Quinn British Psychological Society The British Psychological Society (BPS) is a representative body for psychologists and psychology in the United Kingdom. The BPS is also a Registered Charity and, along with advantages, this also imposes certain constraints on what the Society can and cannot do. For example, it cannot campaign on issues which are seen as party political. In 2012 the BPS had 49,678 members and subscribers, in all fields of psychology, 18,342 of whom were Chartered Members. Its current President, for 2013-14, is Dr Richard Mallows, formerly Head of the Psychology Department at York St John University. Chartership[edit] Following the receipt of a royal charter in 1965, the society became the keeper of the Register of Chartered Psychologists. Mission[edit] The Society aims to raise standards of training and practice in psychology, raise public awareness of psychology, and increase the influence of psychology practice in society. Journals[edit] The BPS publishes 11 journals: Founders[edit] Presidents[edit]