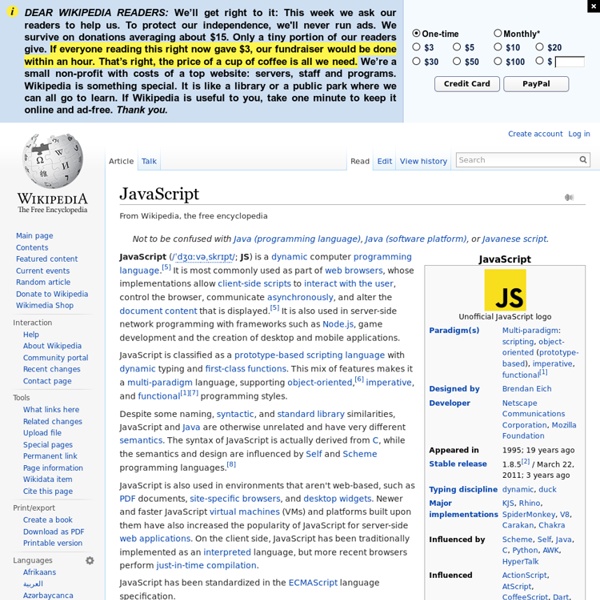 JavaScript is classified as a prototype-based scripting language with dynamic typing and first-class functions. This mix of features makes it a multi-paradigm language, supporting object-oriented,[6] imperative, and functional[1][7] programming styles. JavaScript has been standardized in the ECMAScript language specification. History[edit] Beginnings at Netscape[edit] JavaScript was originally developed by Brendan Eich, while working for Netscape Communications Corporation. Although it was developed under the name Mocha, the language was officially called LiveScript when it first shipped in beta releases of Netscape Navigator 2.0 in September 1995, but it was renamed JavaScript[10] when it was deployed in the Netscape browser version 2.0B3.[11] The change of name from LiveScript to JavaScript roughly coincided with Netscape adding support for Java technology in its Netscape Navigator web browser. Server-side JavaScript[edit] Adoption by Microsoft[edit] Standardization[edit] Trademark[edit]

Beauty is in the Mind of the Beholder There’s no getting around it. In this world, you’re better off being good-looking. At all ages and in all walks of life, attractive people are judged more favorably, treated better, and cut more slack. Many factors can play into personal attractiveness — the way you dress, the way you act, the way you carry yourself, even things that are hard or impossible to change, like social status and wealth, race, and body size and shape. The brain is such a good beauty detector, in fact, that it can judge the appeal of a face before you’re aware you’ve even seen one. There is no doubt that beauty (which here means both male and female attractiveness) is to some extent in the eye of the beholder, but across individuals and across cultures there is nevertheless considerable agreement about what makes a pretty or handsome face, and the evidence strongly counters the conventional wisdom that attractiveness preferences are mainly acquired through life experience. Truth in Beauty A Thousand Ships

JavaScript - MDC Doc Center JavaScript (JS) is a lightweight, interpreted, or just-in-time compiled programming language with first-class functions. While it is most well-known as the scripting language for Web pages, many non-browser environments also use it, such as Node.js, Apache CouchDB and Adobe Acrobat. JavaScript is a prototype-based, multi-paradigm, dynamic language, supporting object-oriented, imperative, and declarative (e.g. functional programming) styles. Read more about JavaScript. This section is dedicated to the JavaScript language itself, and not the parts that are specific to Web pages or other host environments. The standard for JavaScript is ECMAScript. Tutorials Learn how to program in JavaScript with guides and tutorials. For complete beginners Head over to our Learning Area JavaScript topic if you want to learn JavaScript but have no previous experience of JavaScript or programming. JavaScript first steps Answers some fundamental questions such as "what is JavaScript?" JavaScript building blocks

The Star Wars Saga: Suggested Viewing Order » Absolutely No Machete Juggling Brace your­selves, what follows is an amaz­ingly long blog post about the best order in which to watch Star Wars. First, let me say this: for people that couldn't care less about the prequel trilogy, I suggest Harmy's De­spe­cial­ized Edi­tions. They are 720p videos that are the result of "Harmy" from The Orig­i­nal Trilogy forums painstak­ingly re­con­struct­ing the the­atri­cal re­leases of all three films uti­liz­ing a wide variety of video sources as well as custom mattes. Down­load­ing, burning, la­bel­ing, and print­ing cases for these films is one of the neck­beardi­est things I've done (aside from writing this blog post), and I'm ex­tremely glad I did it. So, with that out of the way, what can you do if you do wish to involve the prequel trilogy? What­ever your reason, if you are showing someone the of­fi­cial edi­tions of Star Wars for the first time, you have to make a de­ci­sion about which order to watch the films. So neither order really works. What Gets Removed?

Brokeback Cowgirls : videos Infographic: We Love Ramen Ramen has been a staple in American student cuisine for quite some time now, because of how inexpensive and edible it is. Ramen can also be quite filling if you add some of your own signature cooking hacks to it. This original Hack College Infographic was created because we, like many students around the world are just so crazy in love with ramen. Embed the image above on your site <p><strong>Please include attribution to HackCollege.com with this graphic.</strong><br /> Study up on these digestible ramen recipes as shown on this Infographic: Ramen Spaghetti Ingredients: 1 packet of Top Ramen1 can of stewed tomatoes ($1.50)1 can of tomato sauce ($0.20) Directions: In a sauce pan or pot, add both stewed tomatoes and tomato sauce and heat.Drain all of the water from your ramen noodles.Pour tomato mixture over your cooked ramen noodles.Optional: you may add your Top Ramen flavor packet if you wish, but it’s healthier without. Calories: 200 Fat: 8G Approximate cost: $2.13 Breakfast Ramen Baked Ramen

There's an Onion video floating around in Facebook which is freaking some people out. This is the video itself. : videos If diseases brought over from Europe managed to wipe out so many Native Americans, why didn't any American diseases wipe out the European explorers? : askscience Afraid of Your Child's Math Textbook? You Should Be. - Annie Keeghan There may be a reason you can’t figure out some of those math problems in your son or daughter’s math text and it might have nothing at all to do with you. That math homework you're trying to help your child muddle through might include problems with no possible solution. It could be that key information or steps are missing, that the problem involves a concept your child hasn’t yet been introduced to, or that the math problem is structurally unsound for a host of other reasons. I have worked for over 20 years in educational publishing as a product developer, writer, and editor of curriculum materials for grades K-8. I’ve worked directly for textbook publishers and supplemental publishers (supplemental being those books that are adjuncts to the text), start-ups and large publishing houses. Best of all, I was able to feel proud of those books to which my name was attached. At one time, a writer in this industry could write a book and receive roughly 6% royalties on sales.