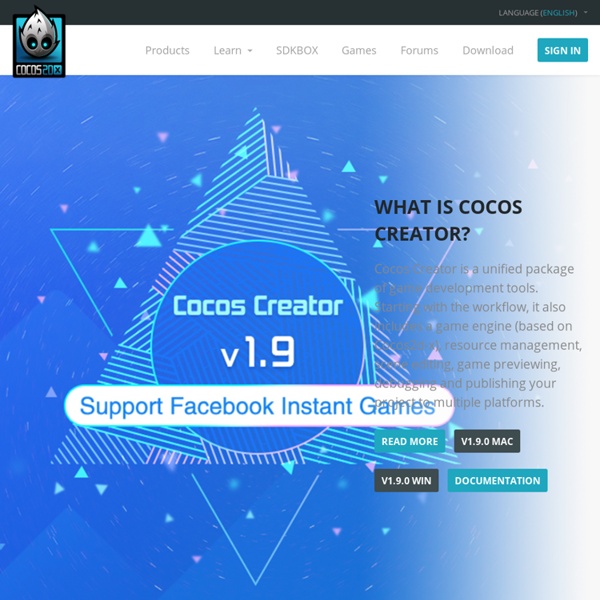 Gamasutra - The Art & Business of Making Games jQuery C++ Tutorial C++ is a middle-level programming language developed by Bjarne Stroustrup starting in 1979 at Bell Labs. C++ runs on a variety of platforms, such as Windows, Mac OS, and the various versions of UNIX. This reference will take you through simple and practical approach while learning C++ Programming language. This reference has been prepared for the beginners to help them understand the basic to advanced concepts related to C++ Programming languages. Before you start doing practice with various types of examples given in this reference, I'm making an assumption that you are already aware about what is a computer program and what is a computer programming language? For most of the examples given in this tutorial you will find Try it option, so just make use of this option to execute your C++ programs at the spot and enjoy your learning. Try following example using Try it option available at the top right corner of the below sample code box −

How to use pthread | Cocos2d-x Now, you can use pthread in cocos2d-x, but there are some limitations. Don’t call any functions which invokes Ref::retain(), Ref::release() or Ref::autorelease(), because AutoreleasePool are not thread-safe. Please refer to Reference Count and AutoReleasePool in Cocos2d-x for more details. Cocos2d-x use AutoreleasePool every where in its framework, so my suggestion is that, don’t invoke any cocos2d-x API in a new thread except Data Structures.If you want to load resources in a new thread, you can use TextureCache::addImageAsync()pthread_cond_wait() seems have a bug, it can not wait at the first time, but works properly in subsequence. If we make retain(), release() and autorealese() thread-safe, then mutex would be required. For the reason that cocos2d-x framework releases the autorelease pool at each end of message loop, using mutex may cause performance issue. By the way, OpenGL context is not thread-safe, which you should always keep in mind.

Motive Animation System: Motive Version 1.1.0 Motive is an open-source, cross-platform, memory efficient, and performant animation system. The v1.1 release of Motive focusses on speed and scalability. Motive now supports rigged character animation and blending between those animations. Motive maintains its aptitude for procedural animation that was the focus of v1.0. Motive can be downloaded from GitHub or the releases page. Important: Motive uses submodules to reference other components it depends upon so download the source using: git clone --recursive https: Motive depends upon: MathFu – used internally; you can substitute your own vector types in the external API.FplUtil – C++ allocator libraries. Motive has optional features that depend upon: FlatBuffers – allow animation data to be defined in json and then compiled to a small binary format. For applications on Google Play that integrate this tool, usage is tracked.

MonoGame | Write Once, Play Everywhere CreateJS Recent Updates Follow @CreateJS November 2014 Added Unit Tests to EaselJSUpdates in preparation for new releases (coming soon). October 2014 Added 'Extras' to EaselJSTons of updates and pull requests in all libs July 2014 Major Updates to EaselJS Graphics The Story Why we built CreateJS About CreateJS CreateJS is a suite of modular libraries and tools which work together to enable rich interactive content on open web technologies via HTML5. Featured Projects Community Show & Tell. Ion Drift A port of the Flash game Ion Drift, b10b was able to build a CreateJS version in less than a day that hit target framerates on even the lowest devices, and outperformed ports to other libraries. By b10b b10b