Cloudera » Apache Hadoop for the Enterprise 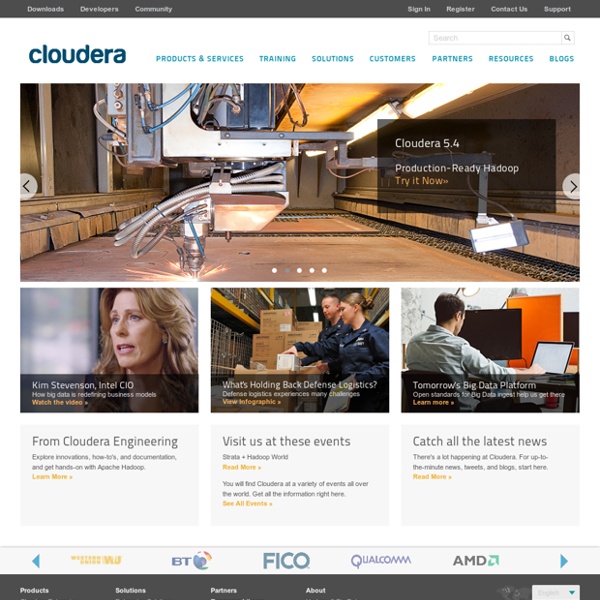 Attributor raises $3.2M to crack down on plagiarism Attributor, a site that helps publishers track down unauthorized copies of their content, has raised another $3.2 million in funding. The San Mateo, Calif. company says it offers a sophisticated way to detect when text or photos have been copied, taking a “fingerprint” of a paragraph or image’s essential features, then scanning 35 billion Web pages to see where the content has been duplicated. Then it helps publishers contact the offending sites and make them link back to the original article, share their advertising revenue, or just take the content down altogether. Attributor also announced some big customers today, namely the Magazine Publishers of America and the United Kingdom’s Periodical Publishers Association. The company already serves large news organizations including Reuters and The Associated Press. The round brings Attributor’s total funding to $25.2 million.

Weka 3 - Data Mining Weka is tried and tested open source machine learning software that can be accessed through a graphical user interface, standard terminal applications, or a Java API. It is widely used for teaching, research, and industrial applications, contains a plethora of built-in tools for standard machine learning tasks, and additionally gives transparent access to well-known toolboxes such as scikit-learn, R, and Deeplearning4j. Download and installDocsCoursesBook Attributor Digimarc is a digital watermarking technology provider enabling embedding of information into many forms of content, including printed material, audio, video, imagery, and certain objects. Digimarc technology provides solutions for media identification and management, counterfeit and piracy deterrence, and digital commerce.[3][4] History[edit] Digimarc was founded by Geoff Rhoads, an astrophysicist with a background in deep space imaging. Initial inspiration for the company came while photographing images of the planet Jupiter. He felt that his digital images were vulnerable on the internet, even with copyright protection.[3] In 1996, after initial venture funding,[5] Digimarc released its first product: a digital watermarking plug-in bundled with Adobe Photoshop, Corel, and Micrografix.[6] After a second round of venture funding and increased investments in research and technology, Digimarc signed a multi-year contract with a consortium of central banks.

New study suggests e-book piracy is on the rise Last January a company called Attributor conducted its first e-book piracy study. And back in May, I mentioned that study in piece called " Is Pad supercharging e-book piracy? " Well, Attributor has conducted a second study more recently and come up with some interesting data. The company says its key findings are: JMagallanes Welcome to Magallanes. The open source project JMagallanes is an end user application for Olap and Dynamic Reports written in Java/J2EE. It combines static reports (based on JasperReports), a Swing pivot table for OLAP analysis, and charts (based on JFreeChart). It reads from many data sources as SQL, Excel, XML, and others, and produces many outputs as PDF, XML, and application specific files for later off-line visualization of reports.

Center'd (Startups) at Duck Duck Go Ignore this box please. Add to Browser Install DuckDuckGo Plus Install search plugin only More ways to add DDG Feedback Buysight Dear Customers, Friends, and Colleagues, Over the past four years, Buysight has developed an innovative suite of targeted display advertising products, building on our partnerships with online retailers, and rooted in our understanding of shopper purchase intent. Our retargeting and customer acquisition solutions have helped hundreds of clients increase their sales and realize a stellar return on their advertising dollar. Today we take the next step toward providing those clients with even more value and opportunities. Buysight has joined forces with Advertising.com as part of the AOL family. Together, we represent the strongest targeted display advertising platform on the Internet.

Lloyd Braun Lloyd Braun (born 1958) is a television and Internet media executive who is currently the co-owner and founding partner of entertainment company BermanBraun. Early life and career[edit] Braun earned his B.A. from Vassar College in 1980, and his law degree from Hastings College of the Law in 1983. He served on the Vassar Board of Trustees, his seat having expired in 2010.[1] Prior to becoming a television executive, Braun practiced entertainment law for 10 years, representing several high profile clients such as Larry David, Howard Stern and David Chase. The character Lloyd Braun on the sitcom Seinfeld was named after him, since the media executive served as the lawyer of Larry David.[2]

Attributor: Anti-Piracy Solutions for Books, Newspapers, Magazines and Video Games Digimarc is the global leader in protecting books, publications and documents from the threat of digital piracy. Our service finds and removes pirated content across the web to protect publisher revenues and author rights through an integration takedown process that delivers high removal rates across various website types. Key Benefits

The most established distribution by far with most number of referenced deployments. Powerful tooling for deployment, management and monitoring are available. Impala is developed and contributed by Cloudera to offer real time processing of big data. by sergeykucherov Jul 15