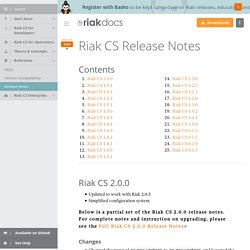 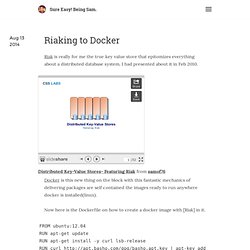 I had presented about it in Feb 2010. Docker is this new thing on the block with this fantastic mechanics of delivering packages are self contained the images ready to run anywhere docker is installed(linux). Astyanax: Brother to Cassandra. Astyanax Astyanax is a Java Cassandra client library. 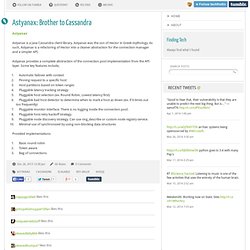 Astyanax was the son of Hector in Greek mythology. As such, Astyanax is a refactoring of Hector into a cleaner abstraction for the connection manager and a simpler API. Astyanax provides a complete abstraction of the connection pool implementation from the API layer. Some key features include, Automatic failover with context Pinning request to a specific host Host partitions based on token ranges Pluggable latency tracking strategy Pluggable host selection (ex. Provided implementations Basic round robin Token aware Bag of connections. InfluxDB: DB for All Times. InfluxDB InfluxDB is a time series, events, and metrics database. 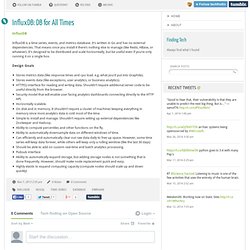 It’s written in Go and has no external dependencies. That means once you install it there’s nothing else to manage (like Redis, HBase, or whatever). It’s designed to be distributed and scale horizontially, but be useful even if you’re only running it on a single box. Design Goals. Google Datastore — Cloud Platform. Precog: Analytics Machinery. 1.10: multi-indexes and serialization improvements - RethinkDB.

We are happy to announce RethinkDB 1.10 (Von Ryan's Express). 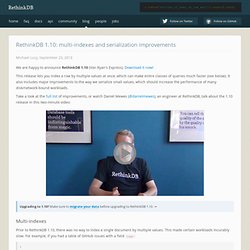 Download it now! This release lets you index a row by multiple values at once, which can make entire classes of queries much faster (see below). It also includes major improvements to the way we serialize small values, which should increase the performance of many disk/network-bound workloads. RethinkDB: Giving NoSQL another Thought. RethinkDB RethinkDB is built to store JSON documents, and scale to multiple machines with very little effort. 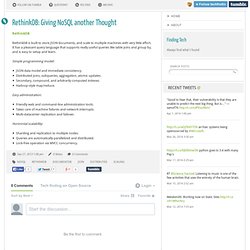 It has a pleasant query language that supports really useful queries like table joins and group by, and is easy to setup and learn. Simple programming model: JSON data model and immediate consistency.Distributed joins, subqueries, aggregation, atomic updates.Secondary, compound, and arbitrarily computed indexes.Hadoop-style map/reduce. Sophia: No more Sophisticated. Sky: Thats the Limit, right? Copy DynamoDB Data Between Regions Using the AWS Data Pipeline. If you use Amazon DynamoDB, you may already be using AWS Data Pipeline to make regular backups to Amazon S3, or to load backup data from S3 to DynamoDB. 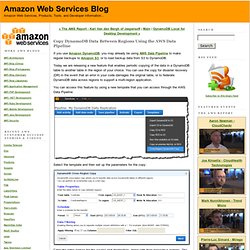 Today we are releasing a new feature that enables periodic copying of the data in a DynamoDB table to another table in the region of your choice. You can use the copy for disaster recovery (DR) in the event that an error in your code damages the original table, or to federate DynamoDB data across regions to support a multi-region application. You can access this feature by using a new template that you can access through the AWS Data Pipeline: Select the template and then set up the parameters for the copy: Enter the table names for the source and destination, along with their respective regions.

New Geo Library for Amazon DynamoDB. Have you ever thought about building an application that is location-based? 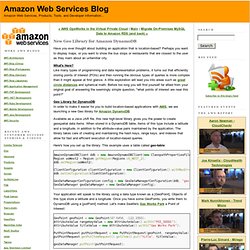 Perhaps you want to display maps, or you want to show the bus stops or restaurants that are closest to the user as they roam about an unfamiliar city. What's Here? Like many types of programming and data representation problems, it turns out that efficiently storing points of interest (POIs) and then running the obvious types of queries is more complex than it might appear at first glance. Now move to the tunes of NoSQL! AWS_NoSQL_MongoDB. How You Should Go About Learning NoSQL. Yesterday I tweeted three simple rules to learning NoSQL. 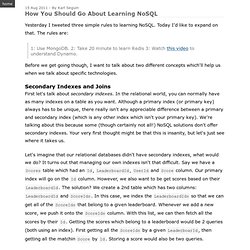 Today I'd like to expand on that. The rules are: 1: Use MongoDB. 2: Take 20 minute to learn Redis 3: Watch this video to understand Dynamo. Before we get going though, I want to talk about two different concepts which'll help us when we talk about specific technologies. Secondary Indexes and Joins First let's talk about secondary indexes. Let's imagine that our relational databases didn't have secondary indexes, what would we do? Obviously this doesn't work well with relational databases since we'd probably have to treat ScoreIds as a comma-delimited string. The other thing we need to talk about are joins. So, how do we deal with a joinless world?

MongoDB With the above out of the way, we can talk about MongoDB. The other nice thing about MongoDB is that it fully supports secondary indexes and is, aside from the lack of joins, not that different in terms of data modeling. Basho, NoSQL, and Polyglot Persistence Adoption With Justin Sheehy. Presentation/Redis_Cluster.pdf. The NOSQL Tapes, Vol. #8: Understanding MapReduce — with Mike Miller. NoSQL at Twitter. Yes, SQL!