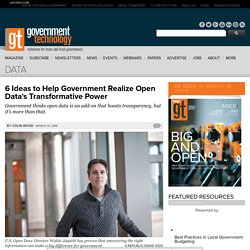 They look like abandoned last-minute science fair projects, pie charts sagging because someone didn’t use enough glue stick. The current open data movement is more than a decade old, but some are still asking why they should even bother. “Right now, it is irrational for almost anybody who works in government to open data. It makes no sense,” Waldo Jaquith said. “Most people, it’s not in their job description to open data — they’re just the CIO. Though perhaps it’s not immediately apparent, Jaquith is the director of U.S. The people who are really into open data — like Jaquith — aren’t the fad-following type. 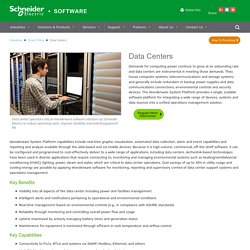 Because it is high-volume, commercial, off-the-shelf software, it can be configured and programmed to cost-effectively deliver to a wide range of applications, including data centers. ArchestrA-based technologies have been used in diverse applications that require connecting to, monitoring and managing environmental systems such as heating/ventilation/air conditioning (HVAC), lighting, power, steam and water, which are critical to data center operations. Cost savings of up to 30% in utility usage and cooling energy are possible by applying Wonderware software for monitoring, reporting and supervisory control of data center support systems and operations management. Key Benefits. Data is the newest form of infrastructure. Data's Evolution: The 'Exciting, Exhilarating, Scary Rollercoaster' of the Consumer Electronics Show. Lessons from Leading CDOs. A Chief Data Officer (CDO) can lead a city or state toward greater data-driven government. 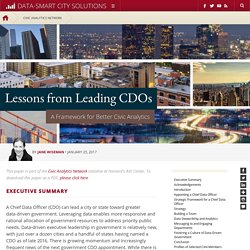 Leveraging data enables more responsive and rational allocation of government resources to address priority public needs. Data-driven executive leadership in government is relatively new, with just over a dozen cities and a handful of states having named a CDO as of late 2016. There is growing momentum and increasingly frequent news of the next government CDO appointment. While there is a growing proliferation of CDOs in government, there are few resources that describe the landscape, either for the benefit of the chief executive appointing a CDO or the new CDO taking office. This paper intends to help new entrants by documenting selected current practices, including advice shared by existing government CDOs, observations by the author, and analysis from government technology and analytics experts. Performance Analytics Archives - Johns Hopkins Center for Government Excellence. 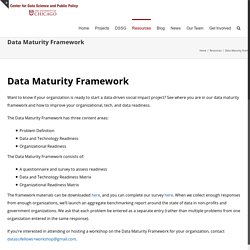 GovEx Labs. Harvard Ash Center Launches Nationwide Network of Urban Chief Data Officers. April 11, Cambridge, MA -- The Ash Center for Democratic Governance and Innovation, a leading research center at the Harvard Kennedy School today announced that it has been awarded a grant by the Laura and John Arnold Foundation to establish and support a national peer network of urban Chief Data Officers (CDOs). 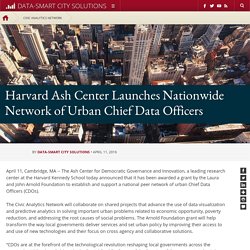 The Civic Analytics Network will collaborate on shared projects that advance the use of data visualization and predictive analytics in solving important urban problems related to economic opportunity, poverty reduction, and addressing the root causes of social problems. The Arnold Foundation grant will help transform the way local governments deliver services and set urban policy by improving their access to and use of new technologies and their focus on cross agency and collaborative solutions. "We're excited that Harvard's Ash Center will bring us together to share ideas", said Tom Schenk Jr., Chicago's Chief Data Officer. 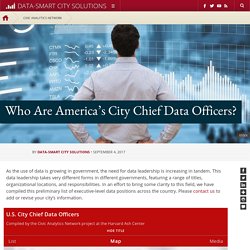 He or she also uses analytics tools to prioritize risk more strategically, deliver services more efficiently, enforce laws more effectively, and increase transparency.Sample Initiatives: DataBridge, a new integrated analytics infrastructure that accesses the wealth of City data, creates a comprehensive and dynamic picture of the City’s environment and operations. FDNY Risk-Based Inspections System, combines data from interviews with veteran firefighters on criteria for dangerous buildings, historical information on fires in recent years, and data from the Departments of City Planning, Buildings, Environmental Protection, and Finance. OpenGrid for Smart Cities. In January of this year, officials at Chicago’s Department of Innovation and Technology (DoIT) launched OpenGrid, a map-based application that provides residents with a way to visually understand complex municipal data. 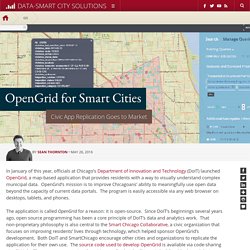 OpenGrid’s mission is to improve Chicagoans’ ability to meaningfully use open data beyond the capacity of current data portals. The program is easily accessible via any web browser on desktops, tablets, and phones. The application is called OpenGrid for a reason: it is open-source. Chicago Encourages Other Cities to Replicate Its OpenGrid. This story was originally published by Data-Smart City Solutions. 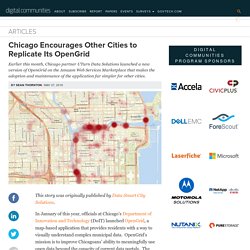 In January of this year, officials at Chicago’s Department of Innovation and Technology (DoIT) launched OpenGrid, a map-based application that provides residents with a way to visually understand complex municipal data. OpenGrid’s mission is to improve Chicagoans’ ability to meaningfully use open data beyond the capacity of current data portals. The program is easily accessible via any web browser on desktops, tablets, and phones. The application is called OpenGrid for a reason: it is open-source. Chicago/opengrid: A user-friendly, map-based tool to combine and explore real-time or historical data.

Chicago Encourages Other Cities to Replicate Its OpenGrid. Municipal Analytics, the Startup Way. One of the great promises of open government this decade has been that it can serve as a catalyst for a new civic-centered “innovation ecosystem.” 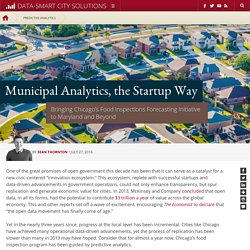 This ecosystem, replete with successful startups and data-driven advancements in government operations, could not only enhance transparency, but spur replication and generate economic value for cities. In 2013, McKinsey and Company concluded that open data, in all its forms, had the potential to contribute $3 trillion a year of value across the global economy. This and other reports set off a wave of excitement, encouraging The Economist to declare that “the open data movement has finally come of age.” Yet in the nearly three years since, progress at the local level has been incremental.

Cities like Chicago have achieved many operational data-driven advancements, yet the process of replication has been slower than many in 2013 may have hoped. Technology and data analytics should transform municipal government, professors say. Rarely is the term "city hall" considered synonymous with the words "innovation" or "efficiency. 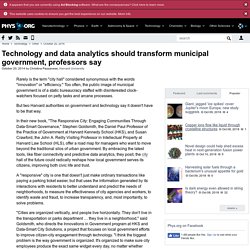 " Too often, the public image of municipal government is of a static bureaucracy staffed with disinterested clock-watchers focused on petty tasks and arcane processes. But two Harvard authorities on government and technology say it doesn't have to be that way. In their new book, "The Responsive City: Engaging Communities Through Data-Smart Governance," Stephen Goldsmith, the Daniel Paul Professor of the Practice of Government at Harvard Kennedy School (HKS), and Susan Crawford, the John A. Reilly Visiting Professor in Intellectual Property at Harvard Law School (HLS), offer a road map for managers who want to move beyond the traditional silos of urban government. By embracing the latest tools, like fiber connectivity and predictive data analytics, they posit, the city hall of the future could radically reshape how local government serves its citizens, improving both civic life and trust.

Big Data Opportunities to Transform Cities. Municipalities of all sizes are destined for big changes from the big data phenomenon American poet A. R. Ammons once said, “A word too much repeated falls out of being.” And although the term big data sometimes seems to be too often repeated, it’s not about to fall “out of being” when it comes to the transformation of today’s cities.

What is big data analytics? - Definition from WhatIs.com. Big data analytics is the process of examining large and varied data sets -- i.e., big data -- to uncover hidden patterns, unknown correlations, market trends, customer preferences and other useful information that can help organizations make more-informed business decisions. By submitting your personal information, you agree that TechTarget and its partners may contact you regarding relevant content, products and special offers. You also agree that your personal information may be transferred and processed in the United States, and that you have read and agree to the Terms of Use and the Privacy Policy. Big data analytics benefits Driven by specialized analytics systems and software, big data analytics can point the way to various business benefits, including new revenue opportunities, more effective marketing, better customer service, improved operational efficiency and competitive advantages over rivals. IDC: The premier global market intelligence firm.

Big data and analytics see double digit growth through 2020. Worldwide revenues for big data and business analytics will reach $150.8 billion in 2017, an increase of 12 percent over 2016, according to a report from International Data Corp. Commercial purchases of BDA-related hardware, software and services are expected to maintain a compound annual growth rate (CAGR) of 12 percent through 2020, when revenues will be more than $210 billion, IDC said. "After years of traversing the adoption S-curve, big data and business analytics solutions have finally hit mainstream," said Dan Vesset, group vice president, analytic and information management. "BDA as an enabler of decision support and decision automation is now firmly on the radar of top executives. The Heart of IoT: Data Analytics. MSP Opportunity: Small Governments Need Big Data. A recent blog post on this website explored the benefits of big data analytics to SMB retailers.

Using Data Analytics To Improve Local Government in Massachusetts. Big Data Could Bring Governments Big Benefits. Big Data Is a Big Deal for Local Government. Local Governments: Ready for Big Data? ... how to turn data into trustworthy, actionable knowledge to get people engaged. On April 19, the second day of the GovLab Experiment, participants took part in a variety of half-hour “horas” featuring discussion built around specific themes. The “If Only We Knew…” session asked participants, “What are the most important research questions that, if answered, would radically transform our understanding of open government?” Hora 4’s central research question revolved around converting data into trustworthy, actionable knowledge to get people engaged.

The International Open Data Charter. Mapping open data governance models: Who makes decisions about government data and how? Leveraging ‘big data’ analytics in the public sector. Pandula Gamage in Public Money & Management: “This article examines the opportunities presented by effectively harnessing big data in the public sector context. How can open data feed citizen engagement? Open Belgium 2017 –the Belgian conference on open knowledge– is now only a few weeks away.

The Region's Open Data at Your Fingertips. Pittsburgh Takes Property Data Visualization to the Next Level. Visualizing Pittsburgh’s Property Data. Properties form the physical fabric of a neighborhood and, ultimately, a city. They’re the spaces in which we live our lives - where work and joy and great sadnesses occur. A building isn’t just a building; a home isn’t just a home. New database lets users look up their tap water contaminants. How Can Data Be Used to Improve Local Service Planning and Delivery? Local government and cities have a challenging job – delivering multiple complex services, which have a large influence on their citizens’ daily lives, and doing that in an environment of extreme financial pressures. According to research by the Local Government Information Unit with The Municipal Journal, 65% of authorities expect to have to use their reserves this year.

5 Reasons Why Video Analytics is now the Big Focus in CCTV Surveillance. Video Analytics What was hoped for in video analytics a decade ago might be finally coming true. A maturation of the technology and vast improvements in overall reliability, effectiveness and accessibility has pushed analytics from the periphery to the market mainstream, while edge devices, their processing capabilities and steadily dropping price points indicate that this is a trend destined to continue. Below are some of the many reasons why analytics was so prominently featured at this year’s IFSEC International and is likely to remain a major industry focus for some time yet. Data makes you smarter: Transforming your data to power tomorrow's utilities and cities. How big data and analytics are transforming the audit.

Data.gov. The role of Big Data in transforming the life of Smart Cities inhabitants. How data and analytics are keeping Philadelphia's water safe.