No SQL ? Anti-database movement gains steam. The meet-up in San Francisco last month had a whiff of revolution about it, like a latter-day techie version of the American Patriots planning the Boston Tea Party. 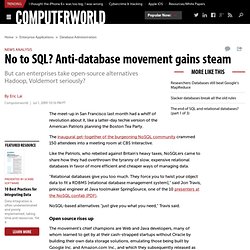 The inaugural get-together of the burgeoning NoSQL community crammed 150 attendees into a meeting room at CBS Interactive. Like the Patriots, who rebelled against Britain's heavy taxes, NoSQLers came to share how they had overthrown the tyranny of slow, expensive relational databases in favor of more efficient and cheaper ways of managing data. "Relational databases give you too much. They force you to twist your object data to fit a RDBMS [relational database management system]," said Jon Travis, principal engineer at Java toolmaker SpringSource, one of the 10 presenters at the NoSQL confab (PDF). 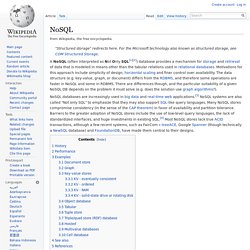 For the Microsoft technology also known as structured storage, see COM Structured Storage. A NoSQL (often interpreted as Not Only SQL[1][2]) database provides a mechanism for storage and retrieval of data that is modeled in means other than the tabular relations used in relational databases. Motivations for this approach include simplicity of design, horizontal scaling and finer control over availability. The data structure (e.g. key-value, graph, or document) differs from the RDBMS, and therefore some operations are faster in NoSQL and some in RDBMS. There are differences though, and the particular suitability of a given NoSQL DB depends on the problem it must solve (e.g. does the solution use graph algorithms?). History[edit] There have been various approaches to classify NoSQL databases, each with different categories and subcategories.

A more detailed classification is the following, by Stephen Yen:[9] Performance[edit] Examples[edit] Cassandra & Twitter. There have been confirmed rumors about Twitter planning to use Cassandra for a long time. 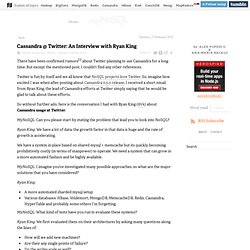 But except the mentioned post, I couldn’t find any other references. Twitter is fun by itself and we all know that NoSQL projects love Twitter. So, imagine how excited I was when after posting about Cassandra 0.5.0 release, I received a short email from Ryan King, the lead of Cassandra efforts at Twitter simply saying that he would be glad to talk about these efforts. So without further ado, here is the conversation I had with Ryan King (@rk) about Cassandra usage at Twitter: MyNoSQL: Can you please start by stating the problem that lead you to look into NoSQL? Ryan King: We have a lot of data, the growth factor in that data is huge and the rate of growth is accelerating. We have a system in place based on shared mysql + memcache but its quickly becoming prohibitively costly (in terms of manpower) to operate.

Ryan King: MyNoSQL: What kind of tests have you run to evaluate these systems? RDF meets NoSQL. March 9, 2010 On Thursday, I have 20 minutes to address 200 people (plus a video audience) at NoSQL Live … from Boston. 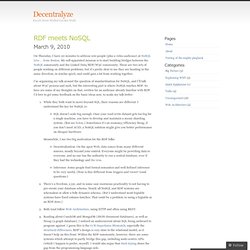 My self-appointed mission is to start building bridges between the NoSQL community and the Linked Data/RDF/W3C community. These are two sets of people working on different problems, but it’s pretty clear to me they are heading in the same direction, in similar spirit, and could gain a lot from working together. I’m organizing my talk around the question of standardization for NoSQL, and I’ll talk about W3C process and such, but the interesting part is where NoSQL touches RDF. So here are some of my thoughts on that, written for an audience already familiar with RDF.

While they both want to move beyond SQL, their reasons are different. So… What does that all boil down to? Bottom line: RDF could learn a lot from NoSQL about scaling and ease-of-programming; NoSQL could learn a lot from RDF about decentralization and inference. Some closing questions, ideas…. RDF face aux défis du stockage. MongoDB is Web Scale. NoSQL + MySQL.

Leveling the Field. July 1, 2011 For most Riak users, Bitcask is the obvious right storage engine to use. 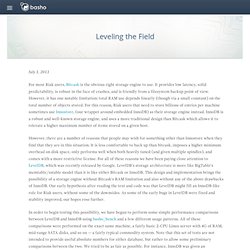 It provides low latency, solid predictability, is robust in the face of crashes, and is friendly from a filesystem backup point of view. However, it has one notable limitation: total RAM use depends linearly (though via a small constant) on the total number of objects stored. For this reason, Riak users that need to store billions of entries per machine sometimes use Innostore, (our wrapper around embedded InnoDB) as their storage engine instead.

InnoDB is a robust and well-known storage engine, and uses a more traditional design than Bitcask which allows it to tolerate a higher maximum number of items stored on a given host. However, there are a number of reasons that people may wish for something other than Innostore when they find that they are in this situation. The first comparison was a sequential load into an empty database. Justin.