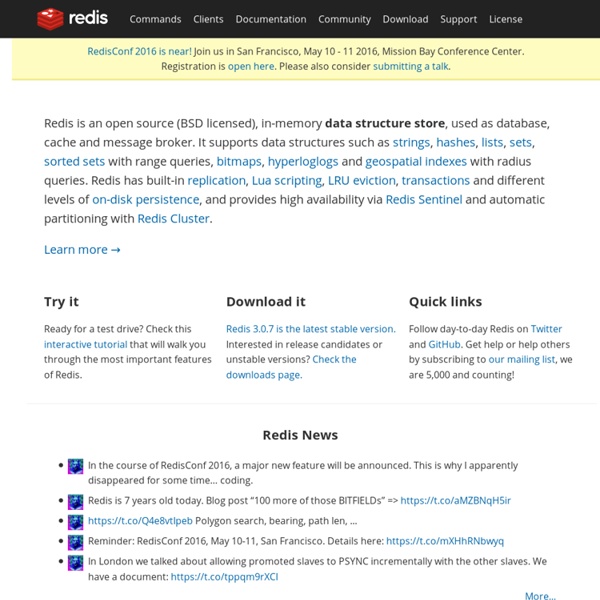 Node + Redis = Fun Static Version node brings asynchronous, evented I/O to the server. Redis gives you a blazing fast database with support for strings, lists and sets. Both Redis and Node.js follow certain patterns, Redis for data-storage, and node for event based programming. MVC, MOVE - Or Simply A State Machine One problem with a state machine approach compared to MVC is that it isn't as familiar. Do you use a Moore or a Mealy machine? A combination of the two? Most people don't use state machines to model the flow of an entire web application, so if you try it out, you might feel like you're on your own. It can be worth it, though. Node.js and Redis Pub-Sub Static Version This is the 7th in a series of posts leading up to Node.js Knockout on how to use node.js. This post, cross-posted from GitHub, was written by James Bracy, founder of Redis To Go. Redis To Go is a dead simple solution for managed Redis instances. Node.js and Redis Pub-Sub

Useful Node.js Tools, Tutorials And Resources - Smashing Coding Advertisement Created by Ryan Dahl in 2009, Node.js is a relatively new technology which has gained a lot of popularity among Web developers recently. However, not everyone knows what it really is. Node.js is essentially a server-side JavaScript environment that uses an asynchronous event-driven model. What this means is simple: it’s an environment which is intended for writing scalable, high performance network applications. Redis Supported languages[edit] Data models[edit] The type of a value determines what operations (called commands) are available for the value itself.

Node.js and MongoDB Static Version This was the sixth in a series of posts leading up to Node.js Knockout on how to use node.js. This post was written by 10gen and is cross-posted from their blog. Couchbase Server Manual 2.0 - Chapter 9. Views and Indexes Couchbase Server is a NoSQL document database for interactive web applications. It has a flexible data model, is easily scalable, provides consistent high performance and is ‘always-on,’ meaning it is can serve application data 24 hours, 7 days a week. Couchbase Server provides the following benefits: Flexible Data Model With Couchbase Server, you use JSON documents to represent application objects and the relationships between objects. Blog rolling with mongoDB, express and Node.js Static Version Article and Code updated by loarabia (Larry Olson). Article and Code updated by Toby Clemson In this article I hope to take you through the steps required to get a fully-functional (albeit feature-light) persistent blogging system running on top of node. The technology stack that we'll be using will be node + express + mongoDB all of which are exciting, fast and highly scalable.

Keep a node.js server up with Forever - blog One of the great benefits of using node.js is the reduction in dependencies needed to run a production web application. By using the 'http' module we can run a stand-alone web server in node.js without the need for a separate server like Apache or nginx. The caveat of not having to use these servers is that their concerns are now the concerns of the node.js application developer. The concern that we will discuss in this article is that of fault tolerance, or how to automatically restart your server when it crashes or enters an invalid state.

The Implications of Infrastructure as Code This is a guest post by Stephen Nelson-Smith (@lordcope) Puppet, Chef, Fabric, Capistrano, Ruby, Python, Github, EC2, Heroku – the list goes on. These are just some of the disruptive forces that have revolutionised what it means to manage systems in the twenty first century. One of the most interesting and important trends to emerge from this paradigm shift is the desire and willingness to treat Infrastructure as Code. Although not synonymous with Devops, its methods and objectives are both supportive and complementary. I think it’s fair to say that if you’re doing Devops today, you’re probably treating your infrastructure as code.

MEAN Stack Tutorial MongoDB ExpressJS AngularJS NodeJS (Part III) - Adrian Mejia’s Blog This is the last part of three-series tutorial. We are going to build a full-stack Todo App using the MEAN (MongoDB, ExpressJS, AngularJS and NodeJS). Brief Background TL; DR: NodeJS has been built from bottom up a non-blocking I/O paradigm, which gives you more efficiency per CPU core than using threads in other languages like Java. Get started here.