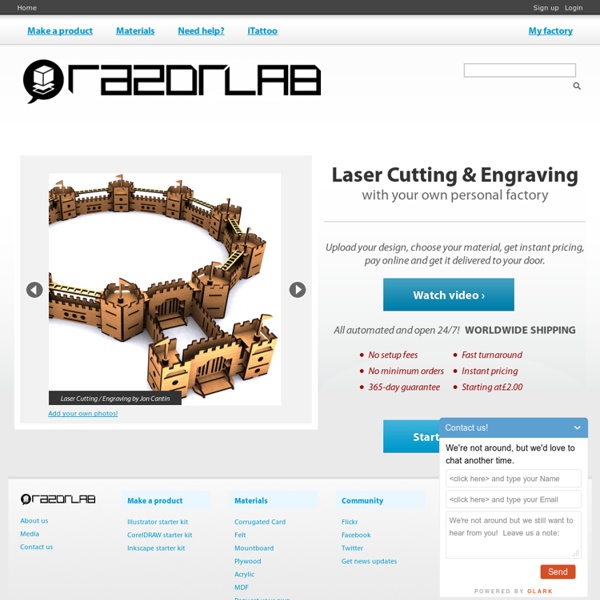 Jon Rafman Aeroply by Karolina Ferenc Karolina Ferenc is a young designer from Poland who recently created this chaise lounge, called Aeroply, designed to fit a woman’s curves. Russia plans domed city in Siberian mine A Russian construction company called AB Elise hopes to build a gigantic domed city in an abandoned diamond mine in Siberia, powered by the sun. The project is more of a concept than a reality so far, but the plans show accomodation for 100,000 people over three main levels. The mine in question is the Mir mine in the Mirniy industrial zone in Eastern Siberia. You might have probably seen photos of it before, labelled "the largest man-made hole on earth" or something similar. It's long been used to mine diamonds, but the mining stopped in June 2001, replaced with a network of underground tunnels below. Presumably this activity would have to cease if the structure is ever built. The project, which is described in a series of slides on AB Elise's site, is split between three levels, penetrated in the centre by a vertical farm and forests.

8 Tragic Ghost Towns of the 20th Century Desolate, ruined, hollow: ghost towns are the remnants of urban catastrophe. Whether it’s a shift in local industry or a particularly nasty disaster that sparks a mass exodus, it means the death knell for a town. Eerie and tragic, yet brimming with history, the following ghost towns are monuments to hardship, good intentions with bad repercussions, and human folly. 1. Hashima Island 端島 (Gunkanjima 軍艦島), Japan Image: Ishida Naoki/Flickr It’s virtually impossible to find an abandoned city with a history as sordid as that of Hashima Island, known commonly as “Gunkanjima,” or Battleship Island. Image: gakuranman.com Purchased in 1890 by the Mitsubishi Corporation for its large coal deposits, Hashima quickly became home to miners and their families. If life wasn’t already bleak for Gunkanjima’s miners, keep in mind that their days were spent descending long tunnels that lead them into coal mines below the ocean. 2. Image: Lyubomir Ivanov Image: Lyubomir Ivanov Image: Lyubomir Ivanov 3. 4.

arcode 8 Abandoned Theme Parks Abroad “Open” for Exploration Call it exoticism: theme parks outside the US seem just a smidgen creepier than those we grew up visiting. Safety guidelines are questionable, attractions are a bit lees planned-out, and themes are chosen with a decidedly laissez-faire attitude. Although these factors might be a detriment to theme parks while they’re still in business, they certainly increase foreign parks’ appeal to urban explorers with an eye for the bizarre once they’ve been abandoned. Between South Korea’s affinity for anthropomorphic roller coasters, Japan’s misguided desire the please the Ruskies, and Berlin’s story of a carnival master turned Peruvian drug smuggler, exploring international abandoned parks is a big notch on any urban explorer’s camera strap. But take note! So if you do get caught snapping a photo before a leisurely roller skate ride, we recommend that you feign the inability to speak the mother tongue, smile really big, and don’t tell them NileGuide sent you! Image: Streetbeat85 /Flickr

Lamina Design 'I am the only son of late King Arawi' | Technology The African prince From: Jack Thompson Delete This at Your Peril by Bob Servant To: Bob Servant Subject: Delete This At Your Peril Dear sir, Permit me to inform you of my desire of going into business. From: Bob Servant To: Jack Thompson Good morning your Majesty, I want 30%, and not a penny less, Your Servant, Bob Servant Hello Bob, See these percentages was arranged by the bank and not me. To: Jack Thompson Hello Jack, I'm afraid I just cannot take my share in cash, too dangerous. Bob To: Bob Servant I have made arrangement in transporting the 4 lions to you. Thanks, Jack Hi Jack, I just popped my head over the garden wall and had a word with Frank. Hope fine. 1. 2. I don't know if you are also interested in leopards cause my friend works in the Government Zoo and he could find a leopard for you? Jack, Frank just called, he will take the following – 4 lions, 2 leopards, 1 elephant, 1 alligator, 2 parrots, 1 hedgehog. Hello Bob. I will only be able to get: 4 lions, 2 leopards, 1 alligator. Love, No reply