Bullies Called Him Pork Chop. He Took That Pain With Him And Then Cooked It Into This. 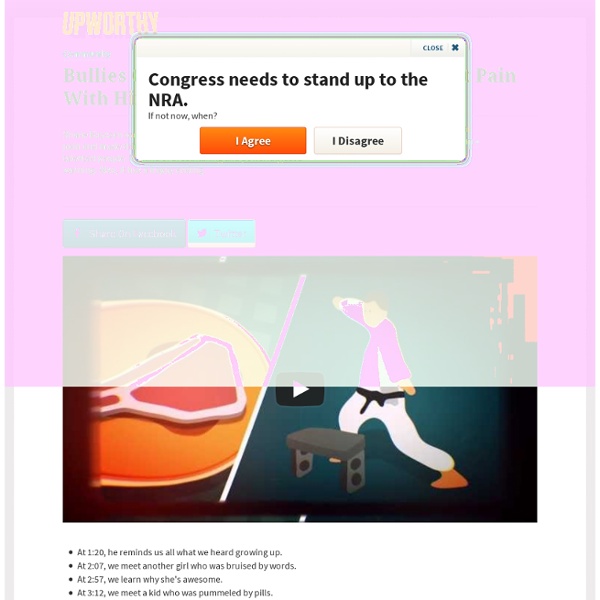 Stop Judging Everyone So Much (Especially Yourself!) The layers upon layers of judgments we hail at people all day. At ourselves. Morning and night. I can’t believe you would do that. I would never do that if I were them. My family wouldn’t do it that way. What are you wearing? She is a good person. I am ugly. I am not smart enough. Maybe you don’t do it. I do. As I click clack my boots down the sidewalk in a hurry. There are many parts to me. We know this. Funny how most things can be at least two things at once isn’t it? We all have opinions. You might change your mind. The past few months, I feel myself sliding down The River of Judgment without so much as a raft. All of us have movable parts; this is the beauty of it. I know it sounds cliché to call it “The Path,” but for lack of a better word, I will call it The Path. Why shouldn’t my Highest Self and Best Version of Me operate more of the time? I would like to have the parts of me meet, maybe in a bar, probably best in a coffee shop. The writerly one says F*ck Balance. Writer: I don’t know.

Passionate Reason the blog of author L.E. Henderson: How I Lost My Guilt and Became Addicted to Writing Since early childhood, I wanted to be a writer. I wrote exuberant stories about vampires, hidden treasure, and animals. Over the years, teachers, friends, and relatives read my stories, smiled, and encouraged me. They told me I wrote well, and so I should write more. By adolescence, writing was not just something I wanted to do. It was a sacred calling. It became even more serious after high school graduation. With the intensity of a pilgrim, I marshaled my energies and earnestly began to plan. However, with all my ambitious planning, I had a big problem: I rarely ever wrote. I did have scattered episodes of exhilarating inspiration, and I would hurry to my notebook and scribble down my thoughts. Writing felt too important, too sacred, to even begin. At the same time, I was uncomfortably conscious of the monstrous gap between my plans and actions. When this strategy failed to make me prolific, I was led to an unsettling conclusion: I must have poor character. These efforts never worked.

Learning to Find Peace in the Confusion and Uncertainty 2013 has certainly been an interesting ride for me so far. Coming into the beginning of the year, I was riding a big high! My first book had just been published by Hay House, my business was flourishing, opportunities to empower youth and parents were abundantly flowing into my life, I had absolute clarity on my life purpose (or so I thought), and I was in the most heart-opening and love-filled relationship I had ever been in. I felt like I had finally “made it” and was truly content in all areas of my life! And just as I started to get comfortable, everything began unraveling before my eyes. It started with my relationship ending the first week of the year, and before I could even take the time to heal, my business slowed down to a halt. I decided that the universe was clearly creating space for me to do some deep healing and growing. All throughout my childhood, my biggest fear was change and uncertainty. The reality is, without questions there can be no answers.

5 Tips for Writing Kick-Ass Characters Bryan Cranston as Walter White Characters make the story. They are the most difficult aspect of any work in progress, and the most crucial to its success. There are so many elements to be considered when dealing with characters, especially when your cast is many. And let’s face it; your characters are in need of some tender loving care. Have no fear! 1. What was the last book you read, film you watched, or game you played where you were rooting for the main character, wishing you were by her side to help in the struggle? Now ask yourself why you felt this way about that character. Relatable characters are the ones that you can identify with, the ones you want to see succeed, and the ones who make your throat tighten when they are in jeopardy. That level of emotion is what you want your audience to experience during the trials and tribulations of your characters. 2. So, where do you begin? Start with a role that needs to be filled, and then work around that. 3. 4. 5. See Also: Codey Amprim

Control Less, Feel More The need to control sucks out the joy that is freely available in every moment. Lately i’ve experienced something I never did before to this extent: The lure to control. All while feeling completely out of control. Control of self, control of experience, control of others, control of emotions, control of outcomes… regardless of how I knew everything my mind tried to control would slip out of my fingers as soon as i’d try to reach out. I know the “clarity”, I know the wisdom of “letting go” and “letting be”, but I haven’t experienced the full extent of where the ego mind can lead you, and therefore haven’t put myself in a situation to transcend my biggest fears and emotional blocks. What a ride. When big changes, sudden endings and quick turns show up in your life after a period of stagnancy, it’s easy to hold your breath in and tense up. The process is what makes you go to greater depths of self-discovery and let go of what you don’t need to carry anymore.

Escapist fiction Escapist fiction is fiction which provides a psychological escape from thoughts of everyday life by immersing the reader in exotic situations or activities. The term is not used favorably, though the condemnation contained in it may be slight. Those who defend works described as escapist from the charge either assert that they are not escapist—such as, a science fiction novel's satiric aspects address real life—or defend the notion of "escape" as such, not "escapism"—as in J. Genres which can include elements of escapist fiction include:

How to Start Over When Your Life Feels Shattered Several years ago, I was asked to help with the grand opening of a major health club in Boulder, CO. I was hired as the Mind & Body Coordinator. It was a beautiful 40,000 square-foot facility. I had dreams for the club. The programs ROCKED, if I do say so myself. We were on the map. I had to give myself a pat on the back. But after a few years, my vision of how the program was going to develop began to differ from corporate. Always the entrepreneur, I had my designs in action. But I felt stuck. I knew it was time to move on, but I was scared to make a change. My position had become my identity. I was paralyzed by fear. One evening, after teaching one of my classes, my boss called me into her office and asked me to step down as manager. Apparently my visions were too big. I felt like my life had just toppled out from underneath me. It took a few moments, but I finally took a breath. Thank you for the opportunity of a lifetime. Thank you for the gift of freedom. Consumed Shattered Lost Hayley

The Conscious Lifestyle: Awareness Skills - Holding focus Being centered brings you into the present moment. Paying attention allows you to fully engage in the moment. The next skill, holding focus. When you desire something to come about - a goal, outcome, or solution - keeping focused on it comes naturally. Knowing what you want, uncomplicated by confusion, is a clear intention. The problem of mixed motives leads to much frustration. Focused intention has long been given inexplicable power. Don’t really know what you want Think you don’t deserve to get what you want Feel skeptical that any result will come Have mixed motives Experience inner conflict Prayer is a controversial subject, and I’m not passing judgment on whether it works or not (given a clear connection to your true self, I personally believe that prayer – or any clear intention – can come true). The secret to holding focus is to make it effortless. That kind of focus is effortless but not passive. You relax into a receptive state. You are quiet inside.

Vonnegut 10 Ways to Live Forever Stamatis Moraitis was in his mid-sixties, living in the United States, when he was diagnosed with lung cancer and told he had only nine months to live. He considered taking his doctor’s advice—aggressive chemotherapy—that might prolong his life but wouldn’t cure him. But upon reflection, he decided to decline it, choosing instead to return to his native Ikaria, a Greek island where he could be buried with his ancestors in a graveyard overlooking the Aegean Sea. He and his wife moved into a small house on a vineyard with his elderly parents, where he expected he would die soon. While he prepared to die, he started going to his old church. Then six months passed, and not only did he not die, he was actually feeling better than ever. Three and a half decades later, Moraitis is ninety-seven years old, still living in Ikaria. At one point, twenty-five years after his diagnosis, Moraitis went back to the United States to ask his doctors what had happened. The Island Where People Forget to Die

Neil Gaiman's 8 Rules of Writing By Maria Popova In the winter of 2010, inspired by Elmore Leonard’s 10 rules of writing published in The New York Times nearly a decade earlier, The Guardian reached out to some of today’s most celebrated authors and asked them to each offer his or her commandments. After Zadie Smith’s 10 rules of writing, here come 8 from the one and only Neil Gaiman: WritePut one word after another. Find the right word, put it down.Finish what you’re writing. Whatever you have to do to finish it, finish it.Put it aside. For more timeless wisdom on writing, see Kurt Vonnegut’s 8 rules for a great story, David Ogilvy’s 10 no-bullshit tips, Henry Miller’s 11 commandments, Jack Kerouac’s 30 beliefs and techniques, John Steinbeck’s 6 pointers, and Susan Sontag’s synthesized learnings. Image by Kimberly Butler