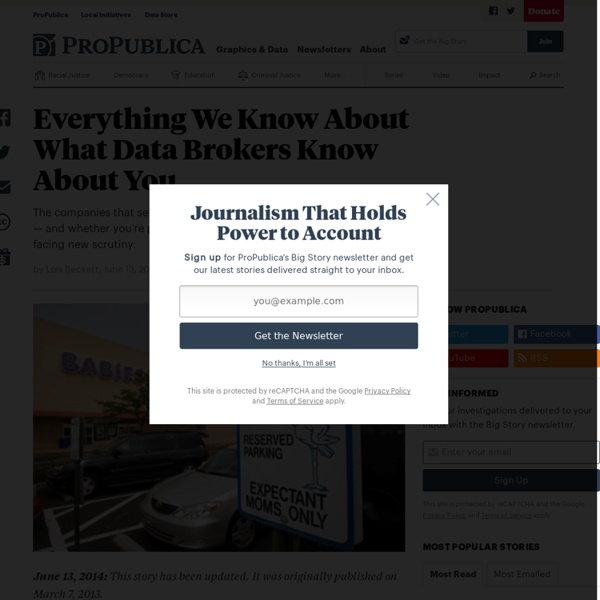 June 13, 2014: This story has been updated. It was originally published on March 7, 2013. We've spent a lot of time this past year trying to understand how the National Security Agency gathers and stores information about ordinary people. But there's also a thriving public marketfor data on individual Americans—especially data about the things we buy and might want to buy. Consumer data companies are scooping up huge amountsof consumer information about people around the world and selling it, providing marketers details about whether you're pregnant or divorced or trying to lose weight, about how rich you are and what kinds of cars you drive. The Federal Trade Commission is pushing the companies to give consumers more information and control over what happens to their data. It's very hard to tell who is collecting or sharing your data—or what kinds of information companies are collecting. Here's a look at what we know—and what we don't—about the consumer data industry. Actually, they do.

SoundCloud Earnings: Burning Cash While Building For Future SoundCloud's latest earnings report shows a familiar pattern in music streaming -- the company's expenses and losses far outpaced its revenue growth in 2014. Revenue grew 53.9 percent to €17.4 million (US $19.7 million) but its loss before income taxes, depreciation and amortization nearly doubled to €36.9 million (US $41.8 million). The deficit came from a large increase in administrative expenses -- the staff to develop and market the service -- up 67.8 percent to €47.8 million (US $54.1 million). In all, including cost of sales, SoundCloud spent €56.4 million (US $63.8 million) to generate €17.4 million. Fast growth meant SoundCloud was burning cash in 2014. Its operating activities -- the normal course of business -- had a net outflow of €32.3 million. In order to keep its growth engine fueled, SoundCloud raised $77 million in funding last year, and it may need even more. Two benchmarks indicate a range of revenue that could be expected from SoundCloud.

to Study Data Broker Industry’s Collection and Use of Consumer Data The Federal Trade Commission issued orders requiring nine data brokerage companies to provide the agency with information about how they collect and use data about consumers. The agency will use the information to study privacy practices in the data broker industry. Data brokers are companies that collect personal information about consumers from a variety of public and non-public sources and resell the information to other companies. In many ways, these data flows benefit consumers and the economy; for example, having this information about consumers enables companies to prevent fraud. Data brokers also provide data to enable their customers to better market their products and services. The nine data brokers receiving orders from the FTC are: 1) Acxiom, 2) Corelogic, 3) Datalogix, 4) eBureau, 5) ID Analytics, 6) Intelius, 7) Peekyou, 8) Rapleaf, and 9) Recorded Future. The Commission vote to approve issuing the orders was 5-0. (FTC File No.

Adam Curtis: “We don't read newspapers because the journalism is so boring” Adam Curtis remains at the forefront of documentary filmmaking. He began in the early 80s, but his first major breakthrough came in 1992 with Pandora’s Box, a film which warned of the dangers technocratic politics and saw him pick up his first of six career BAFTAs. Holed up in a BBC basement, Curtis brings together disparate subjects and uses archival footage to chart political history. His love of music is playfully interwoven into the narrative, whilst his unique, deadpan voice discusses the failures of political systems and ideologies. In his 2004 film, Power of Nightmares, his most remarkable piece of work to date, Curtis debunked the myth that al-Qaeda was an organised global network posing an apocalyptic threat to the West, which, In a post-911 context that saw governments and mass media exaggerating al-Qaeda’s size and influence, was a bold message. All Watched Over by Machines of Loving Grace (2011) So, let's start with this idea of “static culture”. What could Savages do? Yeah.

‘Music is a difficult beast’ admits Heineken as it launches global music-focused campaign The new global strategy #LiveYourMusic, which was created in partnership with Publicis Worldwide, will be supported with a TV campaign, special bottle designs, new packaging, local digital activation and experiential activity. It will be rolled out across all its markets from summer onwards. The TV ad sees numerous people loudly sing Queen’s ‘Bohemian Rhapsody’, before reaching a climax when all the singers come together in a Heineken sponsored music stadium. The new bottle designs and packaging are expected to fit in with the musical direction the brand is taking. Anuraag Trikha, Heineken’s global brand communication director, told Marketing Week that it sponsors more than 1,000 music events globally as music remains an important gateway to reach millennials. “Music has almost become the beat of how Heineken communicates and touches people around the world. “Music is a very difficult beast for brands and it’s challenging for brands to create salience.

How He Used Facebook to Win | by Sue Halpern Prototype Politics: Technology-Intensive Campaigning and the Data of Democracy by Daniel Kreiss Oxford University Press, 291 pp., $99.00; $27.95 (paper) Hacking the Electorate: How Campaigns Perceive Voters by Eitan D. Cambridge University Press, 261 pp., $80.00; $30.99 (paper) Not long after Donald Trump’s surprising presidential victory, an article published in the Swiss weekly Das Magazin, and reprinted online in English by Vice, began churning through the Internet. According to Grassegger and Krogerus, Cambridge Analytica had used psychological data culled from Facebook, paired with vast amounts of consumer information purchased from data-mining companies, to develop algorithms that were supposedly able to identify the psychological makeup of every voter in the American electorate. Even more troubling was the underhanded way in which Cambridge Analytica appeared to have obtained its information. And this was just Facebook. There were other digital innovations as well. In Detroit, Mrs.

Interstellar (2014) Distributions and Commercial Support The following companies provide products that include Apache Hadoop, a derivative work thereof, commercial support, and/or tools and utilities related to Hadoop. Please see Defining Hadoop to see the Apache Hadoop's project's copyright, naming, trademark and compatibility policies. This listing is provided as a reference only. The sole products that can be called a release of Apache Hadoop come from apache.org. The Apache Software Foundation strongly encourages users of Hadoop -in any form- to get involved in the Apache-hosted mailing lists. The Hadoop developers would like you to be aware that filing JIRA issues is not a way to get support to get your Hadoop installation up and running. Entries are listed alphabetically by company name.

Handshake Blog | On dustbins and the price of personal data Your Rating User Rating: 5 (1 votes) A recent article in the UK’s FT, Companies scramble for consumer data, June 12th 2013, shared some intriguing but puzzling insights into the market for personal information. Perhaps the strangest was a proposition which seemed to suggest a complete inversion of normal market economics. The reporter, Emily Steel, started her article by observing that: “Corporate competition to accumulate information about consumers is intensifying … pushing down the market price for intimate personal details to fractions of a cent.” The article was accompanied by a calculator that estimated the market value of the reader’s own personal data which returned values of less than a dollar – and often a lot less than a dollar (I know because I tried it multiple times changing my answers to see what happened). As the buyer, you’re not quite sure about the provenance of the data nor about its significance. But there is a better way. Buyers: think about it, it makes sense.

New Snapchat Map Feature Is Exposing Cheaters Snapchat has turned everyday users into private detectives by allowing us to view our friends’ locations on a new Snapchat map feature, accessible through the app. You don’t have to be Sherlock to see what your friends or lovers are doing without you, thanks to the opt-in update that came out last Wednesday. Now, when you open Snapchat and pinch the Stories screen (yes, pinch) a map will appear with bitmoji versions of all your friends. Users, experts, and parents have shared concerns over the safety of the new update. For other users, they’re less concerned about safety and more concerned about maintaining their covert infidelity. But there’s a lot more to be worried about than cheating. Or find out that your friends don’t want to hang out with you. Or have your chronic lateness exposed. Screenshot by Sarah Montgomery

Marc Anthony Takes On Jay-Z's Roc Nation With New Media Company Marc Anthony – actor, singer, producer extraordinaire – is looking to be the Jay-Z of Latino Roc Nation in 2016. Similarly to HOV, Anthony aims to empower Latino musicians and athletes alike with Magnus Media, a new entertainment branding, marketing, and social media company. “This [company] was born out of frustration,” Anthony told Billboard. Anthony launched a sports division last November after already having signed big music names like Gente de Zona, Chino & Nacho, and Alejandro Sanz. “Baseball, like music, is an ingrained cultural passion for many Latinos throughout the world,” he explained, “And there’s no shortage of amazing stars of Hispanic origin. We’re with you all the way Marc.