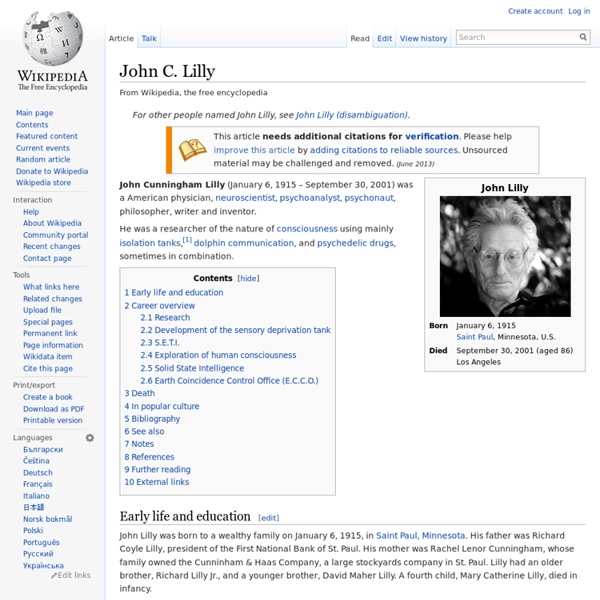 John Cunningham Lilly (January 6, 1915 – September 30, 2001) was a American physician, neuroscientist, psychoanalyst, psychonaut, philosopher, writer and inventor. He was a researcher of the nature of consciousness using mainly isolation tanks,[1] dolphin communication, and psychedelic drugs, sometimes in combination. Early life and education[edit] John Lilly was born to a wealthy family on January 6, 1915, in Saint Paul, Minnesota. His father was Richard Coyle Lilly, president of the First National Bank of St. Paul. Lilly showed an interest in science at an early age. While at St. Despite his father's wishes for him to go to an eastern Ivy-league college to become a banker, Lilly accepted a scholarship at the California Institute of Technology to study science. In 1934, Lilly read Aldous Huxley's Brave New World. Lilly became engaged to his first wife, Mary Crouch, at the beginning of his junior year at Caltech. At the University of Pennsylvania, Lilly met a professor named H. S.E.T.I.

Isolation tank An isolation tank is a lightless, soundproof tank inside which subjects float in salt water at skin temperature. They were first used by John C. Lilly[1] in 1954 to test the effects of sensory deprivation. Extremely low frequency 1982 aerial view of the U.S. Navy Clam Lake, Wisconsin ELF transmitter facility, used to communicate with deeply submerged submarines. Extremely low frequency (ELF) is the ITU designation[1] for electromagnetic radiation (radio waves) with frequencies from 3 to 30 Hz, and corresponding wavelengths from 100,000 to 10,000 kilometers.[2][3] In atmospheric science, an alternative definition is usually given, from 3 Hz to 3 kHz.[4][5] In the related magnetosphere science, the lower frequency electromagnetic oscillations (pulsations occurring below ~3 Hz) are considered to lie in the ULF range, which is thus also defined differently from the ITU radio bands. Alternate definitions[edit]

What is a floatation tank? - Float Tank » Floatation Tank » Isolation Tanks » Sensory Deprivation Tank What is a floatation tank? 500 kg of Epsom salts are added to 1000 litres of water, creating a 30 cm deep solution, which is heated to 35.5 degrees C (skin temperature). The temperature of the water means that once you are settled in the tank, it is virtually impossible to distinguish between parts of the body that are in contact with the water, and those that aren’t, in effect “fooling” the brain into believing that the person is floating in mid-air. Electrical grid General layout of electricity networks. Voltages and depictions of electrical lines are typical for Germany and other European systems. An electrical grid (also referred to as an electricity grid or electric grid) is an interconnected network for delivering electricity from suppliers to consumers. It consists of generating stations that produce electrical power, high-voltage transmission lines that carry power from distant sources to demand centers, and distribution lines that connect individual customers.[1]

Standing wave Two opposing waves combine to form a standing wave. For waves of equal amplitude traveling in opposing directions, there is on average no net propagation of energy. Moving medium[edit] As an example of the first type, under certain meteorological conditions standing waves form in the atmosphere in the lee of mountain ranges. Such waves are often exploited by glider pilots. Standing waves and hydraulic jumps also form on fast flowing river rapids and tidal currents such as the Saltstraumen maelstrom.

Workplace floatation tank schemes could reduce sick leave absence Researchers from Karlstad University in Sweden have found that flotation-REST (Restricted Environmental Stimulation Technique) treatments effectively reduce stress, anxiety and depression and significantly increase optimism and sleep quality in healthy employed adults. The research article, Beneficial effects of treatment with sensory isolation in flotation-tank as a preventive health-care intervention, a randomized controlled pilot trial, was published last month in the journal BMC Complementary and Alternative Medicine. Lack of sleep, depression and anxiety are strong contributors to sick leave absence from work. Previous research into the effects of flotation-REST has focused on individuals suffering from various ailments. The researchers wanted to investigate the effects of this therapy when used by working professionals, in order to find out if flotation-REST is a suitable method for preventing stress and stress related problems in healthy participants.

Earth's magnetic field Computer simulation of the Earth's field in a period of normal polarity between reversals.[1] The lines represent magnetic field lines, blue when the field points towards the center and yellow when away. The rotation axis of the Earth is centered and vertical. The dense clusters of lines are within the Earth's core.[2] The North Magnetic Pole wanders sufficiently slowly to keep ordinary compasses useful for navigation. At random intervals, however, averaging around several hundred thousand years, the Earth's field reverses and the North and South Magnetic Poles switch places. These reversals of the geomagnetic poles leave a record in rocks that allow paleomagnetists to calculate past motions of continents and ocean floors as a result of plate tectonics.

Brane cosmology Brane cosmology refers to several theories in particle physics and cosmology related to string theory, superstring theory and M-theory. Brane and bulk[edit] The central idea is that the visible, four-dimensional universe is restricted to a brane inside a higher-dimensional space, called the "bulk" (also known as "hyperspace"). If the additional dimensions are compact, then the observed universe contains the extra dimensions, and then no reference to the bulk is appropriate. In the bulk model, at least some of the extra dimensions are extensive (possibly infinite), and other branes may be moving through this bulk. Interactions with the bulk, and possibly with other branes, can influence our brane and thus introduce effects not seen in more standard cosmological models.

Google Maps Screen reader users: click here for plain HTML Cookies help us deliver our services. By using our services, you agree to our use of cookies.Learn moreGot it MoreEven more from Google Sign in