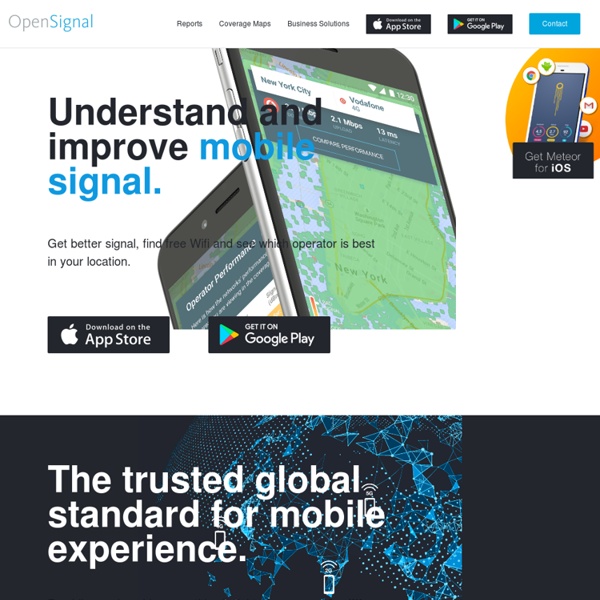 UNITAR - UNOSAT 10-12 May 2011, Bergen, Norway. During the 2011 GDACS Stakeholders Meeting, a crowd-sourcing application for geo-tagged photos was released to the disaster management and early responders community. Developed under the EC funded GEO-PICTURES project by AnsuR, in collaboration with UNOSAT, this Android app automatically geo-locates (tags) photos, size them according to bandwidth and send them off to a web-server - all with the touch of one button. In the web-server, photo location is indicated on a map, and the photo can be further assessed, shared with individuals or groups and even uploaded in high resolution if needed.

wifite - automated wireless auditor Get the latest version at github.com/derv82/wifite What's new in this version: support for cracking WPS-encrypted networks (via reaver) 2 new WEP attacks more accurate WPA handshake capture various bug fixes The Open Data 500: Putting Research Into Action - Open Data Now The Open Data Compass: Exploring the Open Data 500 Follow this site on Twitter and subscribe to biweekly Open Data Now Insights This post originally appeared on the GovLab blog On April 8, the GovLab at NYU, where I am senior advisor, made two significant announcements. At an open data event in Washington, DC, I was pleased to announce the official launch of the Open Data 500, our study of 500 companies that use open government data as a key business resource.

When Raspberry Pi Isn't Enough: Behold the Open Source Laptop Raspberry Pi made waves in recent years as a computer that you can buy for just $35. It's tiny, though, and its built-in capabilities are limited. Is there anything in the same spirit, but with more actual hardware? That's pretty much the question Chumby designer Andrew "Bunnie" Huang asked. Finding the current answers unsatisfying, he set out to create a new kind of computer: an open source laptop. "I've been a hacker of consumer electronics," Huang told Mashable. Crowdmap What Exactly Is Crowdmap? Crowdmap is designed and built by the people behind Ushahidi, a platform that was originally built to crowdsource crisis information. As the platform has evolved, so have its uses.

DNSCrypt Windows Service Manager - Simon Clausen Description This little program will assist in setting up DNSCrypt as a service, configure it and change network adapter DNS settings to use DNSCrypt. It is built on the idea behind dnscrypt-winclient and includes a few elements from this program. It includes the option to use TCP/UDP protocol, IPV4/IPV6 connectivity, choice of network adapter to configure, as well as configurations for currently available DNSCrypt providers.

Open Government Data: Companies Cash In Start-ups and established firms harvest government data for consumer and business applications, creating an economic stimulus. Top 10 Government IT Innovators Of 2013 (click image for larger view) The growing availability of open data -- freely accessible, machine-readable information -- produced by governments and institutions is triggering a new wave of economic stimulus. By one estimate, open data has the potential to unlock between $3.2 trillion and $5.4 trillion in additional economic value annually across a variety of industries, according to a McKinsey Global Institute report released in October.

Thinstation - a light, full-featured Linux thin client OS Thinstation is a basic and small, yet very powerful, Open Source thin client operating system supporting all major connectivity protocols: Citrix ICA, NoMachine NX, 2X ThinClient, Microsoft Windows terminal services (RDP, via RDesktop), VMWare Horizon View, Cendio ThinLinc, Tarantella, X, telnet, tn5250, VMS terminal and SSH (No special configuration of the application servers is needed to use Thinstation). Thinstation is mainly intended for schoolroom, office, company or department use, but can be used at home (eg. for a silent PC in the bedroom that 'runs' XP on your workstation in the back room). While Thinstation is based on Linux, users may actually never see Linux at all. If you decide to connect directly to a Microsoft Windows, Citrix or Unix server, the user will feel that they are running directly on the server. But, you can also have a local Desktop interface (with a local Browser & other tools). Thinstation runs on ordinary PC hardware (32/64 bit i686 class).

Transportation Is All About Real-Time Data The Global Innovation Series is supported by BMW i, a new concept dedicated to providing mobility solutions for the urban environment. It delivers more than purpose-built electric vehicles — it delivers smart mobility services. Visit bmw-i.com or follow @BMWi on Twitter. In order to tackle urban transportation challenges in cities around the world, the Massachusetts Institute of Technology (MIT) and the National Research Foundation of Singapore launched a five-year cooperative project in 2009 — Future Urban Mobility (FM) — to look at new models and technology tools aimed at sustainability. The FM team is one of four interdisciplinary research groups that are part of the Singapore-MIT Alliance for Research and Technology Centre, or SMART Centre.

DNSCrypt Background: The need for a better DNS security DNS is one of the fundamental building blocks of the Internet. It’s used any time you visit a website, send an email, have an IM conversation or do anything else online. While OpenDNS has provided world-class security using DNS for years, and OpenDNS is the most secure DNS service available, the underlying DNS protocol has not been secure enough for our comfort. Many will remember the Kaminsky Vulnerability, which impacted nearly every DNS implementation in the world (though not OpenDNS). Intel searches for the value in open data For decades, Intel has generated the bulk of its revenue by manufacturing processors and other parts for personal computers, remaining comfortably among the top semiconductor vendors. Today, it is exploring business opportunities in a new, less tangible area — the free exchange of information between the federal government and the public, often called “open data.” It is an ongoing research project. Last year, Intel sponsored the National Civic Day of Hacking, during which groups of entrepreneurs and developers across the country were asked to invent ways to use government data — making public transportation information easier to digest, for instance. And in December, the company invited six teams — mostly from these hackathons —to join a “business accelerator,” offering them access to mentors and analytic services. Intel is one of several large tech companies seeking economic value in open data.

Thin client An Aleutia E3 thin client, with flash memory A thin client (sometimes also called a lean, zero or slim client) is a computer or a computer program that depends heavily on some other computer (its server) to fulfill its computational roles. This is different from the traditional fat client, which is a computer designed to take on these roles by itself. The specific roles assumed by the server may vary, from providing data persistence (for example, for diskless nodes) to actual information processing on the client's behalf.

Nokia Maps 3D: Nav and Sharing Nokia's web based 3D map service, Nokia Maps 3D, has been updated with navigation, sharing, new search options and more, the company announced on its blog. Located at maps.nokia.com, Nokia Maps 3D now offer 3D imagery of 25 cities around the world, including Barcelona, Berlin, Chicago, London, Los Angeles, Milan, New York, Rome and San Francisco. To be able to see the 3D version of the map, you'll have to install a browser extension and restart your browser first. It's worth it, though. Nokia's 3D imagery, especially the transitions seen when zooming and unzooming into an image, is quite spectacular.

Scapy Security Power Tools was out in August 2007. I wrote a complete chapter on ScapyI can give trainings on many subjects (Scapy, networks, shellcoding, exploit writing, etc.). Contact me directly: phil@secdev.org About Scapy