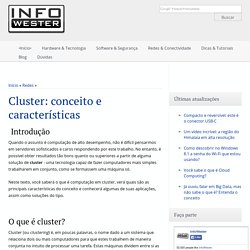 IPL (initial program load) is a mainframe term for the loading of the operating system into the computer's main memory . 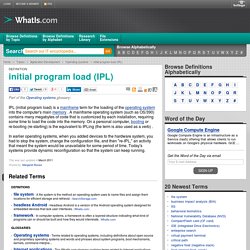 A mainframe operating system (such as OS/390) contains many megabytes of code that is customized by each installation, requiring some time to load the code into the memory. On a personal computer, booting or re-booting (re-starting) is the equivalent to IPLing (the term is also used as a verb) . In earlier operating systems, when you added devices to the hardware system, you had to stop the system, change the configuration file, and then "re-IPL," an activity that meant the system would be unavailable for some period of time. Today's systems provide dynamic reconfiguration so that the system can keep running. 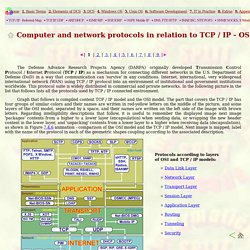 Department of Defense (DoD) in a way that communication can 'survive' in any conditions. Internet, international, very widespread international network (WAN) using TCP / IP protocol into an environment of institutional and government institutions worldwide. This protocol suite is widely distributed in commercial and private networks. In the following picture in the list that follows lists all the protocols used by TCP / IP connected environment.

Lead time. A lead time is the latency (delay) between the initiation and execution of a process. 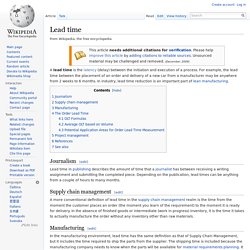 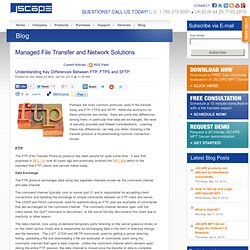 How to Use the Traceroute Command. Traceroute is a command which can show you the path a packet of information takes from your computer to one you specify. 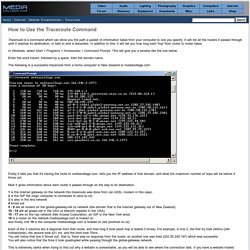 It will list all the routers it passes through until it reaches its destination, or fails to and is discarded. In addition to this, it will tell you how long each 'hop' from router to router takes. In Windows, select Start > Programs > Accessories > Command Prompt. New for Internet Explorer: HTTP/2 Support. As part of the Windows 10 Technical Preview, Internet Explorer will offer HTTP/2 support, performance improvements to the Chakra JavaScript engine, and a top-level domains parsing algorithm based on publicsuffix.org. 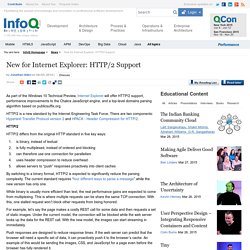 HTTP/2 is a new standard by the Internet Engineering Task Force. There are two components: Hypertext Transfer Protocol version 2 and HPACK - Header Compression for HTTP/2. HTTP/2 differs from the original HTTP standard in five key ways: is binary, instead of textual is fully multiplexed, instead of ordered and blocking can therefore use one connection for parallelism uses header compression to reduce overhead allows servers to “push” responses proactively into client caches. Secure copy. The term SCP can refer to one of two related things, the SCP protocol or the SCP program. 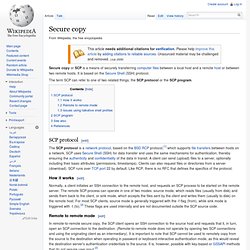 SCP protocol[edit] How it works[edit] Normally, a client initiates an SSH connection to the remote host, and requests an SCP process to be started on the remote server. The remote SCP process can operate in one of two modes: source mode, which reads files (usually from disk) and sends them back to the client, or sink mode, which accepts the files sent by the client and writes them (usually to disk) on the remote host. Transport Layer Security. Transport Layer Security (TLS) and its predecessor, Secure Sockets Layer (SSL), are cryptographic protocols designed to provide communications security over a computer network.[1] They use X.509 certificates and hence asymmetric cryptography to authenticate the counterparty with whom they are communicating,[2] and to exchange a symmetric key. 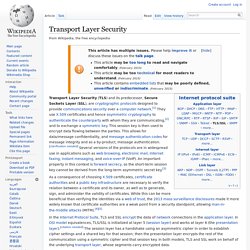 This session key is then used to encrypt data flowing between the parties. This allows for data/message confidentiality, and message authentication codes for message integrity and as a by-product, message authentication. [clarification needed] Several versions of the protocols are in widespread use in applications such as web browsing, electronic mail, Internet faxing, instant messaging, and voice-over-IP (VoIP). SSH. Telnet. Internet protocol suite. The Internet protocol suite is the computer networking model and set of communications protocols used on the Internet and similar computer networks. 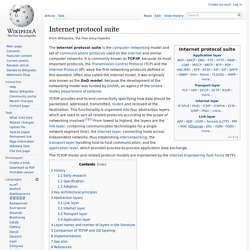 It is commonly known as TCP/IP, because its most important protocols, the Transmission Control Protocol (TCP) and the Internet Protocol (IP), were the first networking protocols defined in this standard. Often also called the Internet model, it was originally also known as the DoD model, because the development of the networking model was funded by DARPA, an agency of the United States Department of Defense.