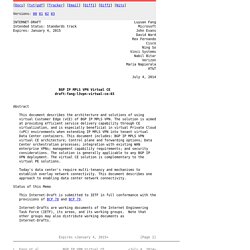 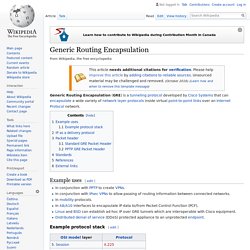 Example protocol stack[edit] Based on the principles of protocol layering in OSI, protocol encapsulation, not specifically GRE, breaks the layering order. It may be viewed as a separator between two different protocol stacks, one acting as a carrier for another. Virtual Extensible LAN. Virtual Extensible LAN (VXLAN) is a network virtualization technology that attempts to ameliorate the scalability problems associated with large cloud computing deployments. 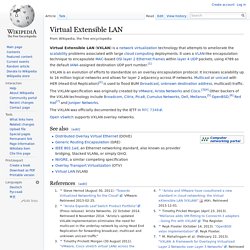 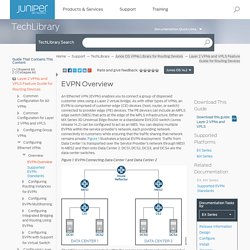 As with other types of VPNs, an EVPN is comprised of customer edge (CE) devices (host, router, or switch) connected to provider edge (PE) devices. The PE devices can include an MPLS edge switch (MES) that acts at the edge of the MPLS infrastructure. Either an MX Series 3D Universal Edge Router or a standalone EX9200 switch (Junos release 14.2) can be configured to act as an MES. You can deploy multiple EVPNs within the service provider’s network, each providing network connectivity to customers while ensuring that the traffic sharing that network remains private. 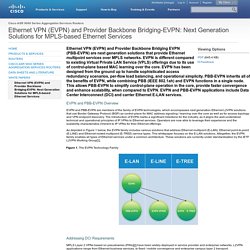 EVPN is different compared to existing Virtual Private LAN Service (VPLS) offerings due to its use of control-plane based MAC learning over the core. EVPN has been designed from the ground up to handle sophisticated access redundancy scenarios, per-flow load balancing, and operational simplicity. PBB-EVPN inherits all of the benefits of EVPN, while combining PBB (IEEE 802.1ah) and EVPN functions in a single node. This allows PBB-EVPN to simplify control-plane operation in the core, provide faster convergence and enhance scalability, when compared to EVPN. 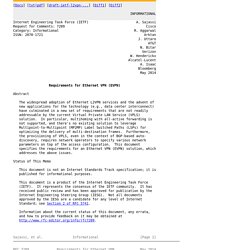 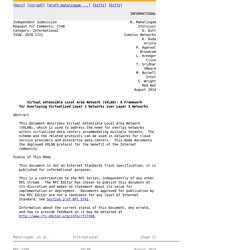 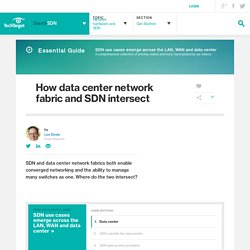 The question will... become increasingly relevant as engineers begin using SDN and network fabrics for scalability and manageability in high performance data centers. But vendors will offer divergent strategies in which SDN and network fabrics are either totally interdependent or largely independent of each other. Users will have to determine which strategy works for them. SDN and network fabrics: Similar roles in the data center? Network fabrics are defined as high-performance, low-latency, scalable Ethernet switching products that connect compute, storage and software elements in a converged network. SDN, on the other hand, provides a software abstraction of the physical network that allows the network to be programmable and specifically tied to the needs of applications. 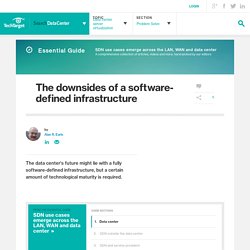 By submitting your personal information, you agree to receive emails regarding relevant products and special offers from TechTarget and its partners. You also agree that your personal information may be transferred and processed in the United States, and that you have read and agree to the Terms of Use and the Privacy Policy. relatively immature, with more work needed in the area of automation. Eric Hanselman, research director for networking at 451 Research in Boston, agrees that the software-defined data center (SDDC) is about improving integration, as well as about automation. The goal is to take activities that often involve physical changes and manual processes, and integrate them with other, more automated data center practices, he said.

An SDDC's primary goal is to make it easier to change server, storage and in particular, network configurations. Using SDN switches to flexibly scale data center networks. Researchers at the University of Illinois at Urbana-Champaign's Ocean Cluster for Experimental Architectures in... 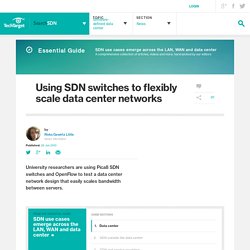 Networks are using SDN switches to test a new data center network architecture that incrementally scales bandwidth between servers without a significant hardware investment. Ocean has installed 13 Pica8 SDN switches with a total of 670 ports that will be "sliced up" to emulate a much greater volume of smaller switches. These switches will act as a large data center network to form a test bed for a wide range of SDN applications, said Brighten Godfrey, an assistant professor of computer science at the university. Ocean is testing an entirely new approach to designing and scaling data center networks, as well as a configuration management and monitoring tool that verifies instructions being sent from centralized OpenFlow controllers actually work. OpenFlow switches support routing in a new network architecture.

Virtual overlay network software separates the virtual network from the underlying physical network hardware, enabling provisioning of virtual networks and accompanying services between servers in the data center. This means that virtual networks can be spun up on demand to support specific virtual workloads, for example. Is an open source network virtualization platform for the cloud. – Architecture Documentation. This chapter provides an overview of the OpenContrail System – an extensible platform for Software Defined Networking (SDN). All of the main concepts are briefly introduced in this chapter and described in more detail in the remainder of this document.

OpenContrail is an extensible system that can be used for multiple networking use cases but there are two primary drivers of the architecture: The Private Cloud, the Virtual Private Cloud (VPC), and the Infrastructure as a Service (IaaS) use cases all involve a multi-tenant virtualized data centers. In each of these use cases multiple tenants in a data center share the same physical resources (physical servers, physical storage, physical network). Rfc7364.txt.pdf.