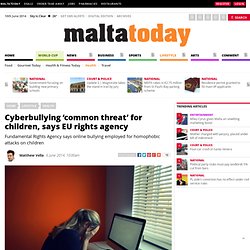 FRA said the severe effects of bullying on the internet, can lead to self‑harm and other psychological affliction for children unable to fight anonymous bullying and ganging-up on the web. Examples of cyberbullying include mean text messages or emails, rumours sent by email or posted on social networking sites, and embarrassing pictures, videos, websites or fake profiles. In May 2013, a 14-year‑old girl from Novara, Italy, committed suicide after some offen­sive videos were posted online. Bullying is not limited to the internet, being widespread also in schools. Two thirds (68%) of all respondents who answered the question say these comments or this conduct has occurred often or always during their schooling before the age of 18. Facebook patent reveals plans for children to join the social network. Facebook is working on a way to allow children under 13 years old join the social network. 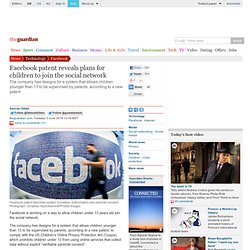 The company has designs for a system that allows children younger than 13 to be supervised by parents, according to a new patent, to comply with the US Children’s Online Privacy Protection Act (Coppa), which prohibits children under 13 from using online services that collect data without explicit “verifiable parental consent”. Facebook currently bans users under 13 from joining the social network. “Child safety advocates, policymakers and companies have discussed how best to help parents keep their kids safe online,” said a Facebook spokesperson in a statement sent to the Guardian. “Like any responsible company, we looked at ways to tackle this issue, but a patent application based on two-year-old research is not a predictor of future work in this area.” 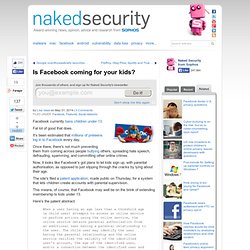 Fat lot of good that does. It's been estimated that millions of preteens log in to Facebook every day. Once there, there's not much preventing them from coming across people bullying others, spreading hate speech, defrauding, spamming, and committing other online crimes. Now, it looks like Facebook's got plans to let kids sign up, with parental authorisation, as opposed to just slipping through the cracks by lying about their age. The site's filed a patent application, made public on Thursday, for a system that lets children create accounts with parental supervision. Facebook introduces Bullying Prevention Centre for UK, Europe. "Report" is a word that kids just don't like. 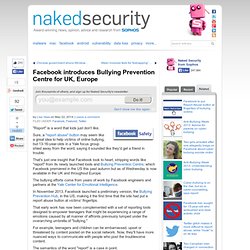 Sure, a "report abuse" button may seem like a great idea to help victims of online bullying, but 13-16-year-olds in a Yale focus group shied away from the word, saying it sounded like they'd get a friend in trouble. That's just one insight that Facebook took to heart, stripping words like "report" from its newly launched tools and Bullying Prevention Centre, which Facebook premiered in the US this past autumn but as of Wednesday is now available in the UK and throughout Europe. The bullying efforts come from years of work by Facebook engineers and partners at the Yale Center for Emotional Intelligence. In November 2013, Facebook launched a preliminary version, the Bullying Prevention Hub, in the US, making it the first time that the site had put a report abuse button at victims' fingertips.

Only two social networking sites protect privacy of minors’ profiles by default. A European report has revealed deficiencies in social networks when they deal with the protection of minors. 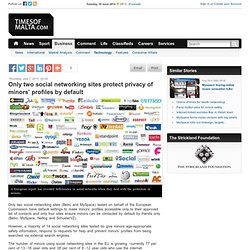 Only two social networking sites (Bebo and MySpace) tested on behalf of the European Commission have default settings to make minors’ profiles accessible only to their approved list of contacts and only four sites ensure minors can be contacted by default by friends only (Bebo, MySpace, Netlog and SchuelerVZ). However, a majority of 14 social networking sites tested do give minors age-appropriate safety information, respond to requests for help and prevent minors’ profiles from being searched via external search engines. The number of minors using social networking sites in the EU is growing –currently 77 per cent of 13 -16 year olds and 38 per cent of 9 -12 year olds who use the internet. Online habits of Maltese children. A recent survey carried out by the Malta Communications Authority under the heading Use of ICT by Minors, reveals some interesting statistics regarding the online habits of Maltese children. 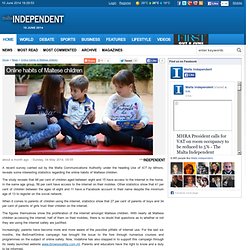 The figures themselves show the proliferation of the internet amongst Maltese children. Increasingly, parents have become more and more aware of the possible pitfalls of internet use.