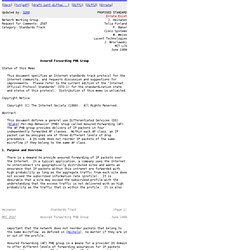 This section defines the queueing and discard behavior of the AF PHB group. Resource Reservation Protocol. RFC 3168 - The Addition of Explicit Congestion Notification (ECN) to IP. Routers, Switches, Hubs & firewalls. Datagram Congestion Control Protocol. DCCP provides a way to gain access to congestion control mechanisms without having to implement them at the application layer. 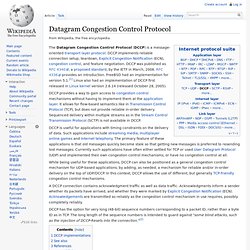 It allows for flow-based semantics like in Transmission Control Protocol (TCP), but does not provide reliable in-order delivery. Sequenced delivery within multiple streams as in the Stream Control Transmission Protocol (SCTP) is not available in DCCP. DCCP is useful for applications with timing constraints on the delivery of data. Such applications include streaming media, multiplayer online games and Internet telephony. The primary feature of these applications is that old messages quickly become stale so that getting new messages is preferred to resending lost messages. While being useful for these applications, DCCP can also be positioned as a general congestion control mechanism for UDP-based applications, by adding, as needed, a mechanism for reliable and/or in-order delivery on the top of UDP/DCCP.

Infoblox-whitepaper-ip-address-management_0.pdf. Traffic shaping. Traffic shaping (also known as "packet shaping") is a computer network traffic management technique which delays some or all datagrams to bring them into compliance with a desired traffic profile.[1][2] Traffic shaping is a form of rate limiting. 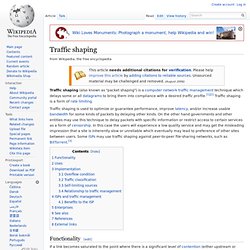 Functionality[edit] Traffic policing is the distinct but related practice of packet dropping and packet marking.[5] The technique of selecting or categorising traffic into different types or classes is traffic classification. Uses[edit] Traffic shaping is sometimes applied by traffic sources to ensure the traffic they send complies with a contract which may be enforced in the network by a policer. It is widely used for network traffic engineering, and appears in domestic ISPs' networks as one of several Internet Traffic Management Practices (ITMPs).[6] Nodes in an IP network which buffer packets before sending on a link which is at capacity result in a traffic shaping effect. 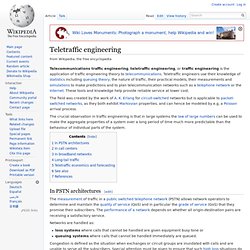 Teletraffic engineers use their knowledge of statistics including queuing theory, the nature of traffic, their practical models, their measurements and simulations to make predictions and to plan telecommunication networks such as a telephone network or the Internet. These tools and knowledge help provide reliable service at lower cost. The field was created by the work of A. K. Erlang for circuit-switched networks but is applicable to packet-switched networks, as they both exhibit Markovian properties, and can hence be modeled by e.g. a Poisson arrival process.

The crucial observation in traffic engineering is that in large systems the law of large numbers can be used to make the aggregate properties of a system over a long period of time much more predictable than the behaviour of individual parts of the system. See also[edit] Integrated services. In computer networking, IntServ or integrated services is an architecture that specifies the elements to guarantee quality of service (QoS) on networks. 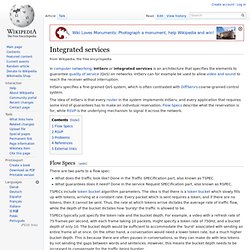 IntServ can for example be used to allow video and sound to reach the receiver without interruption. IntServ specifies a fine-grained QoS system, which is often contrasted with DiffServ's coarse-grained control system. Flow Specs[edit] There are two parts to a flow spec: What does the traffic look like? TSPECs include token bucket algorithm parameters. TSPECs typically just specify the token rate and the bucket depth. RSPECs specify what requirements there are for the flow: it can be normal internet 'best effort', in which case no reservation is needed.