Motion Control Software Solution  Real-Time Motion Capture using Kinect, XNA and the DigitalRune Engine. Real-time motion capture is one of the more common requests I see for the Kinect so when I saw this... 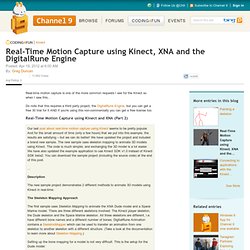 Do note that this requires a third party project, the DigitalRune Engine, but you can get a free 30 trial for it AND if you're using this non-commercially you can get a free license too. Our last post about real-time motion capture using Kinect seems to be pretty popular. And for the small amount of time (only a few hours) that we put into this example, the results are satisfying – but we can do better! We have updated the project and included a brand new sample. The new sample uses skeleton mapping to animate 3D models using Kinect. Project Information URL: I was able to download the 30 trial, the sample code from the article (click through for it) and was playing with this in just a few minutes. Stream Kinect mocap data into Blender with NI mate. Wednesday, February 1st, 2012 | Posted by Jim Thacker Programming duo Delicode – also known as Julius Tuomisto and Janne Karhu – has released NI mate, a free application for converting real-time motion capture recorded with a Kinect into MIDI or Open Sound Control data. 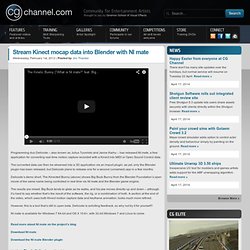 The converted data can then be streamed into a 3D application via an import plugin: as yet, only the Blender plugin has been released, but Delicode plans to release one for a second (unnamed) app in a few months. Delicode’s demo short, The Kinected Bunny (above) shows Big Buck Bunny from the Blender Foundation’s open movie of the same name being controlled in real time via NI mate and the Blender game engine. The results are mixed: Big Buck tends to glide as he walks, and his jaw moves directly up and down – although it’s hard to say whether that’s the result of the software, the rig, or a combination of both. However, this is a tool that’s still in open beta. Read more about NI mate on the project’s blog. BVH Conversion Release - motions list - cgspeed.

[An earlier version of this file is included with every .zip file linked from the main Carnegie-Mellon Graphics Lab Motion Capture Databasefull file listing with descriptions, word processor formatv1.02 last update May 4, 2009 Compiled from the individual CMU index files by B. 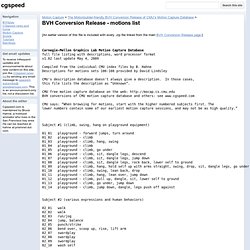 June 26, 2010: I've now re-released the Motionbuilder-friendly BVH conversion of the CMU motion files with some minor improvements to the frame-1 T pose. 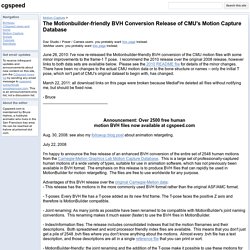 I recommend the 2010 release over the original 2008 release, however links to both data sets are available below. Please see the 2010 README file for details of the minor changes. There have been no changes to the actual CMU motion data or to the bone structure or names -- only the initial T pose, which isn't part of CMU's original dataset to begin with, has changed.

March 22, 2011: all download links on this page were broken because MediaFire deleted all files without notifying me, but should be fixed now. July 22, 2008 I'm happy to announce the free release of an enhanced BVH conversion of the entire set of 2548 human motions from the Carnegie-Mellon Graphics Lab Motion Capture Database. Document de MikuMikuDance Tutoriel Ver 2 et 3 pour l'utilisateur en anglais seulement Kudan. This is MikuMikuDance Ver 2 and 3 Turorial Documents for English User. 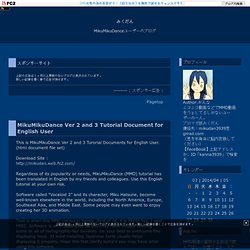 (html document file set) Download Site : Regardless of its popularity or needs, MikuMikuDance (MMD) tutorial has been translated in English by my friends and colleagues. Use this English tutorial at your own risk. Software called “Vocaloid 2” and its character, Miku Hatsune, become well-known elsewhere in the world, including the North America, Europe, Southeast Asia, and Middle East. English page - moggproject. Face And LipsFace And Lips helps you to create MikuMikuDance facial motions. 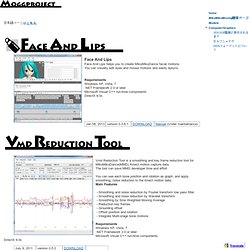 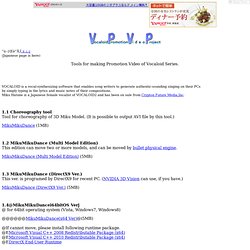 VOCALOID is a vocal-synthesizing software that enables song writers to generate authentic-sounding singing on their PCs by simply typing in the lyrics and music notes of their compositions. Miku Hatune is a Japanese female vocalist of VOCALOID2 and has been on sale from Crypton Future Media,Inc. 1.1 Choreography tool Tool for choreography of 3D Miku Model. iClone5 - Real-time 3D Animation Software.