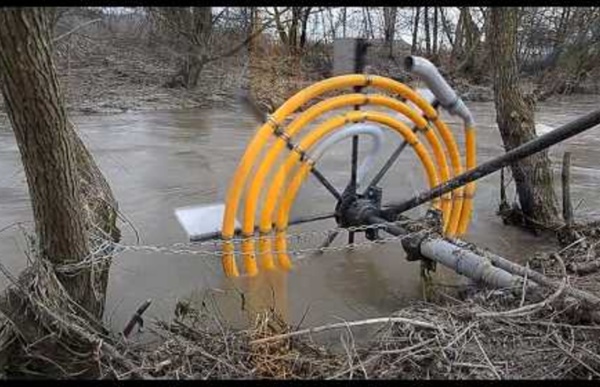 Off Grid Rainwater System Collects, Stores, and Purifies Water This rainwater collection system in the Canadian wilderness has provided a source of clean, potable water for this family of four’s off grid cabin for almost 20 years. The system is relatively simple and very low maintenance. Water is collected using a three hundred square foot piece of metal roofing, where it flows downhill into a gutter. It is passed through a layer of plastic mesh as it runs into the gutter to filter out any large debris, including the needles that drop onto the roof from surrounding trees. The water is then passed through a course filter as it leaves the gutter, filtering out even more of the larger debris. After leaving the course filter, the water is run down a pipe and through a fine filter where it is further cleansed before it enters the 2000-gallon storage tank.

New carbon membrane generates a hundred times more power Leiden chemists have created a new ultrathin membrane only one molecule thick. The membrane can produce a hundred times more power from seawater than the best membranes used today. The researchers have published their findings in Nature Nanotechnology. Thin and porous When fresh and saltwater meet, an exchange of salt and other particles takes place. A membrane placed in water is able to harness energy from particles moving from one side to the other.

Build a Homemade Mosquito Trap Mosquitoes are more than just annoying pests in your yard or garden. Mosquitoes carry many diseases including West Nile, encephalitis and malaria. There are many commercial products to rid your landscape of these dangerous insects.

Portland Installs Turbines in City Water Pipes To Create Free Electricity Leave it to Portlandia to figure out how to create hydro-power without building a dam! Portlandians are now generating free electricity every time they turn on the tap! If you live in Portland, Oregon, your lights are now powered in part by the water flowing through your pipes. The city recently installed new municipal water pipes equipped with four 42-inch turbines that create electricity from the water passing through them.

Coolest Hack Ever? Cool Water + Pipes + Fan = DIY AC When life gives you lemons, you make lemonade. When life gives you an apartment with no air conditioning, you grab some supplies and make your own air conditioner. A clever Flickr user did just that and documented his project with annotated pictures. Starting off with a regular oscillating tabletop fan, he wrapped copper tubing in a spiral around the front and back of the fan. Flexible plastic tubing connects the copper coils to the reservoir below so that the fan can still oscillate. Video: DIY Rainwater Collection System Here’s a great video from MrNativeTexan that will show you how put together a simple-to-construct rainwater collection system for your garden! There are a couple of neat ideas going on here – connecting the barrels with a manifold not only makes them fill at the same rate, but there’s also only one tap needed. Four barrels leads to an increased pressure at the tap and the barrels drain from below so they can be fully emptied. Water is synonymous with life, it’s a precious resource and we need to reduce our demand wherever possible to save trouble for future generations. If we don’t act with this in mind it’s easy to see that people could be fighting over clean water in years to come.

Pros And Cons Of Mini-Hydro Power Plants In Irrigation Canals While the first time that moving water allowed to produce electricity occurred more than a century ago, in 1882, on the Fox River in Wisconsin, hydropower has always had a significant role in the expansion of the electricity among the world population. After all, hydropower remains as one of the most valuable renewable energy resources, and they represent a non-polluting, a non-radioactive, and a nonconsumptive use of water resources. A major discussion that we have been watching in the last couple of decades relates to the size that hydropower dams should have. The truth is that even though hydropower has a lot of benefits, it also has some drawbacks, especially in what concerns with the environmental effects and social displacements that it can cause. So, more and more researchers are looking for ways to produce hydro power without affecting the environment. One of the thing that is being discussed is the use of micro-hydro power plants in irrigation canals.

How To: Vegetable Oil Lamp Posted on Oct 04, 2010 in DIY Projects, Emergency Preparedness & Survival Source: Judy of the Woods If you like candles, live without electricity, or like to have some lighting back-up, you might like this simple little DIY project. An oil lamp can have a number of advantages over candles and mineral oil lamps: very cheap to run – can even burn used cooking oilthe fumes are less toxic than those of paraffin candles or mineral oil lampsthe production of renewable vegetable oil is less harmful to the environment than petroleum based products (including paraffin candles)for the extreme survivalist, vegetable oil is easier to store in bulk, or can even be produced on the home farmdue to the wider base, more stable than candles, and the flame of any burning wick falling into the oil will be extinguishedodor free when using olive oil Making an oil lamp is very easy, quick and cheap, and gives plenty of opportunity for a creative outlet.

Rainwater Harvesting Basics Ironically, water use in developed countries often is highest in the places where rain falls the least. Rainwater harvesting is one easy and low tech solution in reducing domestic water use. How to utilize rain water The easiest rainwater source is that which falls in our gardens. Products Individual Page Imagine you could use any kind of small head difference in a river or canal. The power those drops contain might surprise you. We created a technology that can make use of all these small waterfalls or rapids in a way that's safe for the environment. Gone are the days that communities had to choose between having power or fish to eat. Our robust and fish friendly vortex turbiness will generate energy 24/7 at an incredibly low cost of energy.

DIY: Beer Can Into Camping Stove You can whip one of these up in a matter of minutes. They’re so easy to make and they work really well. First find yourself some scissors and a beverage can and then start the above video. This is an inexpensive way to be prepared in the event of a power outage as these stoves give off a lot of heat and have the ability to cook large meals. They also make great holiday gifts for friends and family. For more great repurposing ideas, check out Repurposing 24/7