A Blog on Oddities: the odd, bizarre and strange things of our world! 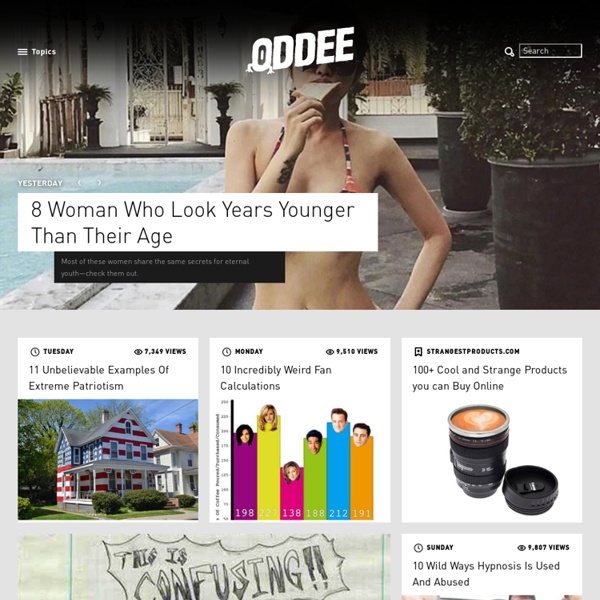 Home - AmO Images: Capturing the Beauty of Life - AmO Images: Capturing the Beauty of Life Gleb Goloubetski was born in 1975 in Omsk, Russia, a Siberian town. His father, who died when Gleb was six, was a merited artist of the Soviet Union, and his grandfather was an architect. His mother currently owns a gallery in Omsk. Toxic shock: California allows up to one thousand times more glyphosate in drinking water than needed to cause breast cancer in women (NaturalNews) Late last week, a story broke that revealed glyphosate -- the chemical name of Roundup herbicide -- multiplies the proliferation of breast cancer cells by 500% to 1300%... even at exposures of just a few parts per trillion (ppt). The study, published in Food and Chemical Toxicology, is entitled, "Glyphosate induces human breast cancer cells growth via estrogen receptors." You can read the abstract here. There's a whole lot more to this story, however, but to follow it, you need to understand these terms: ppm = parts per million = 10 (-6) = number of parts out of a million

GetGlue: Check-in to tv, movies and music Social Network for Entertainment Discover what to watch, share what you're watching with friends and fans, and get updates from your favorite shows. Worth1000 Home Welcome fans of Worth1000.com. If you're looking for Worth's amazing creative content, then you've rocked up to the right place! Just in case you missed the news, Worth1000.com is now part of DesignCrowd.com - and we've preserved all the amazing Worth1000 content here so you can search the archives to find old favorites and new contest art. We're delighted to have Worth1000's talented users and their treasure trove of imaginative and original content, built over many years, as part of our design community.

Number Systems of the World A Playground of Thoughts > Number Systems of the World Number Systems of the World Japanese page I am collecting number systems of world languages. 10 Reasons Why Alex Jones Should Be Tried For Treason “You don’t know who’s good or bad until you get to that crisis point.” ~Alex Jones, Oct. 14, 2011 David Chase Taylor February 19, 2012Truther.org The goal of Alex Jones and his Zionist handlers is to get America to destroy herself. This is done the same way that Russia was destroyed under Stalin; dividing and then collapsing society upon itself by baiting Americans into a violent revolution against their own police and military. Alex Jones is the founder of Infowars.com and PrisonPlanet.com, and the self-proclaimed grand-daddy of the 9/11 Truth movement.