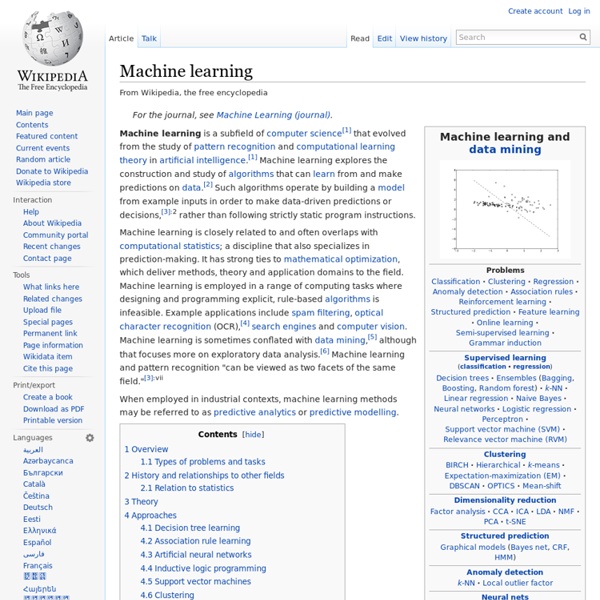 Machine learning is a subfield of computer science[1] that evolved from the study of pattern recognition and computational learning theory in artificial intelligence.[1] Machine learning explores the construction and study of algorithms that can learn from and make predictions on data.[2] Such algorithms operate by building a model from example inputs in order to make data-driven predictions or decisions,[3]:2 rather than following strictly static program instructions. Machine learning is closely related to and often overlaps with computational statistics; a discipline that also specializes in prediction-making. It has strong ties to mathematical optimization, which deliver methods, theory and application domains to the field. Machine learning is employed in a range of computing tasks where designing and programming explicit, rule-based algorithms is infeasible. Overview[edit] Tom M. Types of problems and tasks[edit] History and relationships to other fields[edit] Theory[edit]

Conservative Myths and the Death of Marlboro Man Those of a certain age remember TV ads featuring the Marlboro Man – a rugged individual who rode a horse through an America that even then had long since disappeared. He was self-reliant. No moocher. He inhabited Marlboro Country. The Marlboro Man is dead. Of course, the whole thing was an extraordinarily destructive myth – just like the myths the Republican’s have been selling for 30 years, now. This is the bull being marketed by Republicans to the American people. This is why they’re threatening to take us over the fiscal cliff. Let’s say that again, in words that even Fox News and the Wall Street Journal can understand. How about austerity? Austerity budgets are – and always have been – about disabling government. This economic philosophy will bring about the same end as that faced by the Marlboro Men. But it’s not just the fiscal cliff and faux austerity. Climate Change? You’d think this wouldn’t be too much to ask. But you would be wrong. We are at a crossroads.

Internet U.S. Army soldiers "surfing the Internet" at Forward Operating Base Yusifiyah, Iraq The Internet is a global system of interconnected computer networks that use the standard Internet protocol suite (TCP/IP) to link several billion devices worldwide. It is a network of networks[1] that consists of millions of private, public, academic, business, and government networks of local to global scope, linked by a broad array of electronic, wireless, and optical networking technologies. The Internet carries an extensive range of information resources and services, such as the inter-linked hypertext documents and applications of the World Wide Web (WWW), the infrastructure to support email, and peer-to-peer networks for file sharing and telephony. Most traditional communications media, including telephony and television, are being reshaped or redefined by the Internet, giving birth to new services such as voice over Internet Protocol (VoIP) and Internet Protocol television (IPTV). Terminology Users

Data mining Data mining is the process of discovering patterns in large data sets involving methods at the intersection of machine learning, statistics, and database systems.[1] Data mining is an interdisciplinary subfield of computer science and statistics with an overall goal to extract information (with intelligent methods) from a data set and transform the information into a comprehensible structure for further use.[1][2][3][4] Data mining is the analysis step of the "knowledge discovery in databases" process or KDD.[5] Aside from the raw analysis step, it also involves database and data management aspects, data pre-processing, model and inference considerations, interestingness metrics, complexity considerations, post-processing of discovered structures, visualization, and online updating.[1] Etymology[edit] In the 1960s, statisticians and economists used terms like data fishing or data dredging to refer to what they considered the bad practice of analyzing data without an a-priori hypothesis.

DBSCAN Density-based spatial clustering of applications with noise (DBSCAN) is a data clustering algorithm proposed by Martin Ester, Hans-Peter Kriegel, Jörg Sander and Xiaowei Xu in 1996.[1] It is a density-based clustering algorithm: given a set of points in some space, it groups together points that are closely packed together (points with many nearby neighbors), marking as outliers points that lie alone in low-density regions (whose nearest neighbors are too far away). DBSCAN is one of the most common clustering algorithms and also most cited in scientific literature.[2] In 2014, the algorithm was awarded the test of time award (an award given to algorithms which have received substantial attention in theory and practice) at the leading data mining conference, KDD.[3] Preliminary[edit] Consider a set of points in some space to be clustered. A point p is a core point if at least minPts points are within distance ε of it, and those points are said to be directly reachable from p. Notes[edit]

Machine Learning Seven Aspects of Strategy Formation Exploring the Value of Planning Abstract It has been widely argued that the planning approach that dominates entrepreneurial training does not represent either actual or good strategic decision-making.