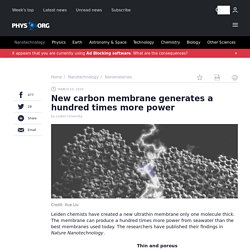 The membrane can produce a hundred times more power from seawater than the best membranes used today. The researchers have published their findings in Nature Nanotechnology. Thin and porous When fresh and saltwater meet, an exchange of salt and other particles takes place. Portland Installs Turbines in City Water Pipes To Create Free Electricity. Leave it to Portlandia to figure out how to create hydro-power without building a dam! 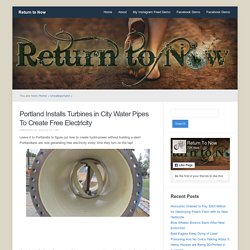 Portlandians are now generating free electricity every time they turn on the tap! If you live in Portland, Oregon, your lights are now powered in part by the water flowing through your pipes. Log into Facebook. Turbulent Website – Turbulent micro hydropower. Amazon. Tech Insider UK - These whirlpool turbines can provide... Pros And Cons Of Mini-Hydro Power Plants In Irrigation Canals. While the first time that moving water allowed to produce electricity occurred more than a century ago, in 1882, on the Fox River in Wisconsin, hydropower has always had a significant role in the expansion of the electricity among the world population. 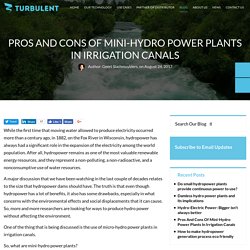 After all, hydropower remains as one of the most valuable renewable energy resources, and they represent a non-polluting, a non-radioactive, and a nonconsumptive use of water resources. A major discussion that we have been watching in the last couple of decades relates to the size that hydropower dams should have. The truth is that even though hydropower has a lot of benefits, it also has some drawbacks, especially in what concerns with the environmental effects and social displacements that it can cause. So, more and more researchers are looking for ways to produce hydro power without affecting the environment. One of the thing that is being discussed is the use of micro-hydro power plants in irrigation canals. 1: Efficient 2: Reliability. Products Individual Page. Imagine you could use any kind of small head difference in a river or canal. 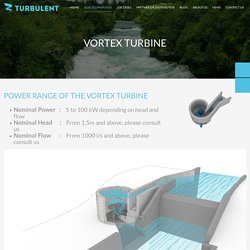 The power those drops contain might surprise you. We created a technology that can make use of all these small waterfalls or rapids in a way that's safe for the environment. Gone are the days that communities had to choose between having power or fish to eat. Our robust and fish friendly vortex turbiness will generate energy 24/7 at an incredibly low cost of energy. That way you can have a project with high return on investment that improves the world just that little bit. Now, if you look at a river or canal, you'll notice that it's full of these small cascades, that's how nature builds rivers. 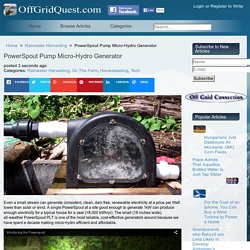 Homemade hydroelectric generator uses plastic bottles as water wheel. Lost in the woods near a stream, with some empty water bottles, wire, plastic plates, and a stepper motor, *and* you need to charge your smartphone? 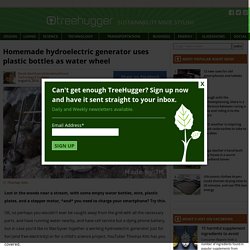 Try this. OK, so perhaps you wouldn't ever be caught away from the grid with all the necessary parts, and have running water nearby, and have cell service but a dying phone battery, but in case you'd like to MacGyver together a working hydroelectric generator just for fun (and free electricity) or for a child's science project, YouTuber Thomas Kim has you covered. Kim, a power plant operator and science enthusiast, shows us how it's done in this short video, which is short on technical details but long on showing the viability of a small-scale DIY hydro generator for charging a smartphone and/or LED lights: Although not specifically mentioned, it appears that he also integrated a voltage regulator (and USB connector) to keep the output from damaging the phone, which would seem to be an important factor.

H/T Gizmodo. How To Convert Your Old Washing Machine Into A Water Powered Generator for Free Power. Posted Categories: Energy Whether you’re living off-the-grid or you just want to be able to save on monthly energy bill, you will appreciate this homemade generator tutorial courtesy of Angry Ram. 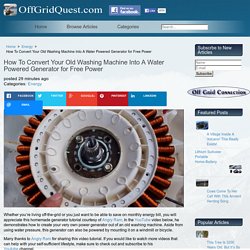 In the YouTube video below, he demonstrates how to create your very own power generator out of an old washing machine. Project - mobile hydro mobile hydro. New way to generate energy by using the Five gallon bucket generator. - Living Outdoor. Three examples of water powered technology will make you question the need for gas stations. (Collective Evolution) Every day the world becomes aware of technologies that have the potential to halt the unnecessary damage we continue to inflict on the world through our use of fossil fuels, and water powered technology seems to be one of them. 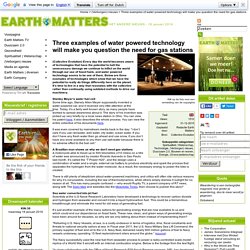 Below are three examples of technologies which show that we have the potential to really do things differently here on the planet. It’s time to live in a way that resonates with the collective rather than continually using outdated methods to drive our machinery. Stanley Meyer’s water fuel cellSome time ago, Stanely Allen Meyer supposedly invented a water powered car, and it received very little attention at the time. Today, it’s a fairly well known story, as many people have worked to spread awareness about it. The story of his invention was picked up very briefly by a local news station in Ohio. It was even covered by mainstream media back in the day: “I don’t care if you use rainwater, well water, city water, ocean water. PowerTrekk. PowerTrekk - the world´s first Water Charger: 5 inches x 2.5 inches x 1.75 inches Power anywhere, anytime - just add water. 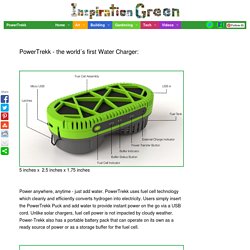 PowerTrekk uses fuel cell technology which cleanly and efficiently converts hydrogen into electricity. Free power- How to convert an old washing machine into a water powered generator. Portland installs turbines in their city water pipes, powers city by flushing toilets. Hydoelectric turbines have been installed in one of the main water pipelines in Portland, Oregon, utilizing the water pressure to produce electricity. 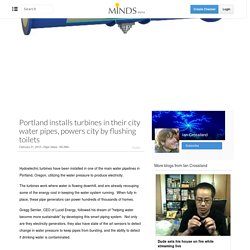 The turbines work where water is flowing downhill, and are already recouping some of the energy cost in keeping the water system running. When fully in place, these pipe generators can power hundreds of thousands of homes. Gregg Semler, CEO of Lucid Energy, followed his dream of "helping water become more sustainable" by developing this smart piping system. Water Pipe Generates Electricity! DIY Water Turbine construction by HomesteadingSurvivalism. Did you know that you can build a HYDRO TURBINE / WATER TURBINE for under $50? We will show you, step-by-step (using simple directions/diagrams, & basic tools/parts) HOW To BUILD such devices.

-Save Money & the Environment - Unlike other publications, this CD has info useful to EVERYONE. -We Give You Several Different Plans/Diagrams (not just one) to build various kinds of devices all capable of capturing, storing, & utilizing WATER POWER / HYDRO ENERGY --Here is What You Get: 1. 2. 3. 600 Watt Water Powered Generator Made from an Old Washing Machine. A Small Creek Provides Plenty of Power For This Off-Grid Home.

For eight years, Tracey and I lived in a solar powered home and for eight cloudy winters, we ran a small Honda generator every week to recharge our batteries. We understood that the original owner of our home had operated a small hydro system from the property's year round creek but we never investigated this option because the creek ran through dense forest. Besides, we could just tell there wasn't sufficient drop over its course. We finally decided to use Backwoods Solar's Site Level just to confirm hydro didn't make sense.Much to our surprise, our traverse through the woods from a potential turbine site to a convenient intake location revealed about 80' of drop. Not possible, we declared, assuming our technique must have failed.

To double-check our method, we used the same Site Level to measure the drop from our water cistern to kitchen sink. Site Level Voila, hydro potential. A quick assessment of the benefits of this quantity of energy convinced us to proceed with an installation. Free power- How to convert an old washing machine into a water powered generator. How To Build A 5 Gallon Bucket Hydroelectric Generator. The PowerSpout, A Small Water Turbine Generator.

There’s energy all around us. The only thing separating us and the energy and using it are the tools that allow us to capture it. DIY Water Turbine construction by HomesteadingSurvivalism. Homemade Water Turbine.