You must disable or remove Adblock to visit this website. 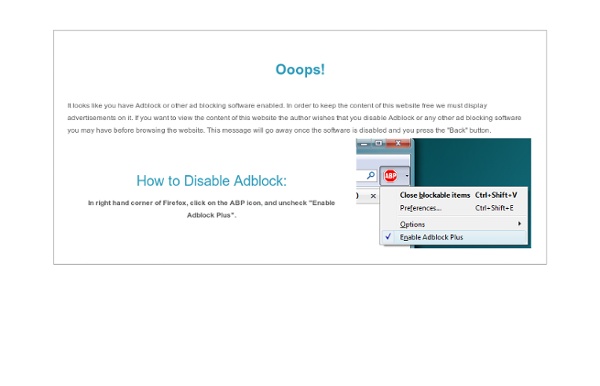 Philly: Another burka robbery Burkas are all the rage in America, particularly among the criminal. via Teens in Muslim burkas try to rob Delco gun shop. Most teenagers do dumb things. But not trying-to-rob-Joe-Galiano dumb. about What is Lua? Lua is a powerful, efficient, lightweight, embeddable scripting language. It supports procedural programming, object-oriented programming, functional programming, data-driven programming, and data description. Lua combines simple procedural syntax with powerful data description constructs based on associative arrays and extensible semantics. Lua is dynamically typed, runs by interpreting bytecode with a register-based virtual machine, and has automatic memory management with incremental garbage collection, making it ideal for configuration, scripting, and rapid prototyping. Where does Lua come from?

Watercolor Effect As my tutorial had been choose for the Top Ten in June by NI-LIMITS BLOG. Now I continue my job and share my photo edit tricks with all my fellow readers. Step 1 Open an image, I will use this image because it suit to my tricks. Step 2 CTRL + J, duplicate the image. Massive Food Stamp Fraud Ring Busted in Arizona K&S convenience store workers Kameel Sweiss, Ameer Sweiss, and Faday Sweiss were arrested on Wednesday on charges of suspicion of illegally conducting an enterprise, fraudulent schemes and artifices, money laundering, unlawful use of food stamps, and computer tampering. "People were essentially selling their cards to [the] store," said spokesperson Stephanie Grisham. Arizona Attorney General Tom Horne says the bust is the fifth of its kind this year and that this is the largest to date. Horne told Fox News host Neil Cavuto that food stamp fraud is a growing problem, as 47,635,297 people now receive taxpayer-funded food stamps.

COCOMO The Constructive Cost Model (COCOMO) is an algorithmic software cost estimation model developed by Barry W. Boehm. The model uses a basic regression formula with parameters that are derived from historical project data and current as well as future project characteristics. COCOMO was first published in Boehm's 1981 book Software Engineering Economics[1] as a model for estimating effort, cost, and schedule for software projects. It drew on a study of 63 projects at TRW Aerospace where Boehm was Director of Software Research and Technology. The study examined projects ranging in size from 2,000 to 100,000 lines of code, and programming languages ranging from assembly to PL/I.

How to Create a Surreal Photo Manipulation with Twisting Water In this tutorial, we're going to create a fantasy photo manipulation mixing different images and learning to use and modify the stock images in a creative way. The idea is to get a compact image that looks absolutely real, and at the same time, absolutely impossible! Final Image Preview Long Road Ahead to 'Six Million Dollar Man' SAN DIEGO -- Robotic, brain-controlled replacements for human hands and eyes no longer appear to be purely sci-fi fantasy, but dozens of hurdles to making them into plastic-and-metal reality still remain, researchers suggested here. Such issues as how to keep electrodes functioning in vivo for years, where to connect them to nerve fibers, how to detect the brain signals intended to control a robotic limb -- even how to keep a robotic leg from running when a patient dreams of running -- are among those that researchers on "brain-machine interfaces" are still contending with, according to presenters at a session Saturday at the annual meeting of the Society for Neuroscience. Talk of such devices brings to mind the 1970s TV program "The Six Million Dollar Man" and the 1987 film "Robocop," as well as the new series "Almost Human" that debuts this month.

The SEJ x SMX West Interview: Brian Clark of CopyBlogger I had the opportunity to interview marketing experts who are speaking at SMX West as part of SEJ’s partnership with Third Door Media. Be sure to attend Brian’s session on Tuesday, March 11 (and visit SEJ’s booth in the exhibit hall!) Bio: Brian Clark is a serial entrepreneur based in Boulder, Colorado. He’s the founder and CEO of Copyblogger Media, and the host of New Rainmaker, debuting in January of 2014. Expanding the Science and Practice of Gratitude For too long, we’ve taken gratitude for granted. Yes, “thank you” is an essential, everyday part of family dinners, trips to the store, business deals, and political negotiations. That might be why so many people have dismissed gratitude as simple, obvious, and unworthy of serious attention.

Transform Someone Into a Water Elemental I am going to run you through a tutorial on how to take a regular picture with a person in it and make them look like a water elemental. First download this picture of a woman in a bathing suit. Next download these 2 images of splashing water