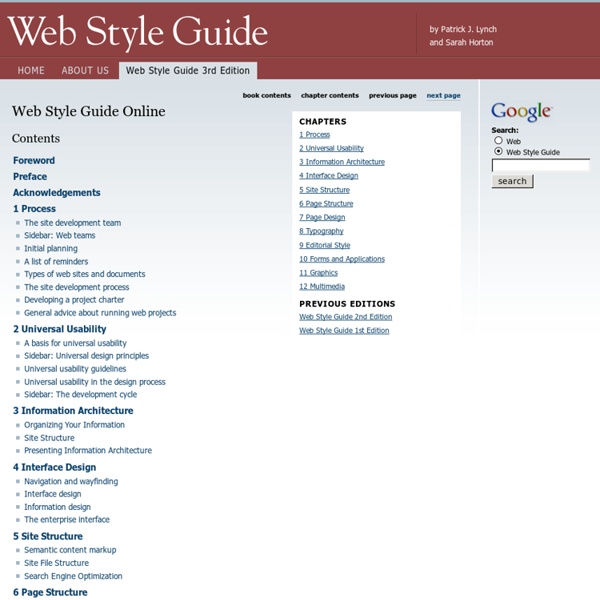 Data collection for usability research Taking notes in usability tests Anyone who has ever conducted a usability evaluation of a web site, software application, or consumer product, knows that human behaviour research often produces reams of data that can take significant time to analyse. To be productive, researchers must organize and reduce these data so that they can quickly perform their analysis and proceed with improving the product. People who are new to the field tend to take notes on paper or on a computer.

Response failed: Basic HTML Basic HTML -- Let's be clear on the basics before we go forward. If any of these ideas are not clear you may get confused later so, to be clear here are the rock-bottom HTML basics: Basics of HTML -- 1,2,3 1) A Web Page is just plain a plain-text document which contain special HTML "tags". An HTML tag is a special word surrounded by "Greater Than" and "Less Than" brackets like this: <font> Web pages are usually given the file extension .htm

CSS-Styled Lists: 20+ Demos, Tutorials and Best Practices Essentials When we think about CSS-Styled lists, different ideas come to mind but that rusty old image of bulleted items is not one of them anymore. There are lots of different methods to format nice HTML lists that is used in most web designs not only for navigation menu (vertical or horizontal) but for formatting many design blocks in a stylish and elegant manner. In this article, we’ll have a look at how such lists can create a whole new look, feel, and effect of a site. You might be interested to check other CSS related posts : Different Uses of Styled Lists

css Zen Garden Resources Skip to: Navigation | Content | Sidebar | Footer mezzoblue CSS Zen Garden Resource Guide Affordances The concept of an affordance was coined by the perceptual psychologist James J. Gibson in his seminal book The Ecological Approach to Visual Perception. The concept was introduced to the HCI community by Donald Norman in his book The Psychology of Everyday Things from 1988. There has however been ambiguity in Norman's use of the concept, and the concept thus requires a more elaborate explanation. Terminology, Syntax, & Introduction - A Beginner's Guide to HTML & CSS Before beginning our journey to learn HTML and CSS it is important to understand the differences between the two languages, their syntax, and some common terminology. As an overview, HTML is a hyper text markup language created to give content structure and meaning. CSS, also known as cascading style sheets, is a presentation language created to give content style and appearance. To put this into laymen terms, HTML determines the structure and meaning of content on a web page while CSS determines the style and appearance of this content. The two languages are independent of one another. CSS should not reside within an HTML document and vice versa.

Test Drive - CSS3 Filters : MSEdge Dev CSS3 filters allow you to change the rendering of an element before it is displayed in the document. You can blur, hue-rotate, sepia, saturate, etc. elements using a styling instruction with the 'filter' property. You can even animate filters with @keyframes. Result 25 Useful WYSIWYG Editors Reviewed - Smashing Magazine When it comes to coding editors, it’s damn hard to a get a clear overview of all the benefits and functionalities different editors have to offer. However, in the end everybody needs one, so it’s important to know which editor is best tailored to your personal needs. WYSIWYG-editors are often criticized by real coding ninjas for bloated, dirty and not standards-complaint source code they’ve been producing over the last years. However, WYSIWYG-editors have become much better recently.

Web Site Structure Creating an entire Web site requires more than just the knowledge of HTML. You need to create a Web site that flows and makes it easy for your readers to get to where they want to go. Types of Web Pagestypes of Web pages Very Useful Free Video Guides and Tutorials for Beginners Who Want to Create a Web Site Even if you don’t know the first thing about where to start, here's how to create your own web site. There’s some great help for you in a series of free basic videos from Microsoft. They have been created especially for people who don’t know anything about HTML and CSS. The series is called “HTML5 & CSS3 Fundamentals: Development for Absolute Beginners” and is at the MSDN site called Channel 9 (link is here) There are 21 episodes that will teach you the fundamentals of HTML5 and CSS3. They can be downloaded individually for viewing on your own computer or smartphone and several formats are available.

CSS3 Radial Gradients Article update: 12th December 2012 The article has been updated to cover the gradient syntax covered in the (at the time of writing) latest Image Values and Replaced Content Module Level 3 specification, dated June 12th 2012. Introduction Gradients are much-used on web sites: if you want to liven up pretty much any UI feature (buttons, panels, headers, etc.) you can use a gradient, although you should use them sparingly to avoid the web site christmas tree effect™. Traditionally we used CSS background images to add gradients to our UIs, and they worked ok, but they were rather inflexible.