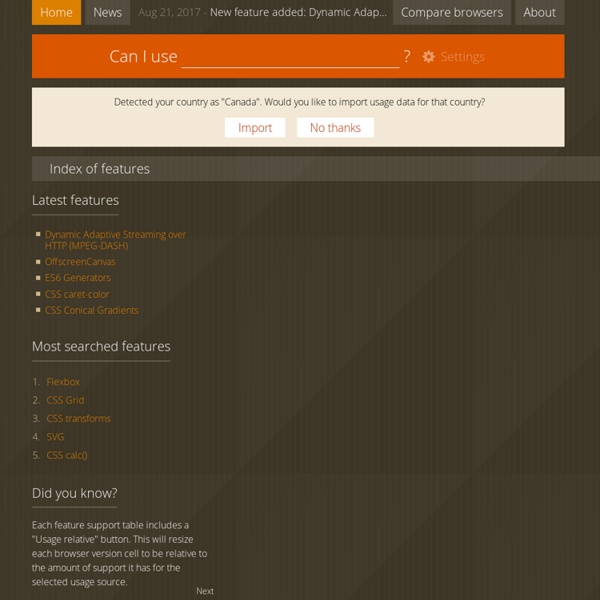 # CSS inline-block - Recommendation Method of displaying an element as a block while flowing it with text. Only supported in IE6 and IE7 on elements with a display of "inline" by default. Alternative properties are available to provide complete cross-browser support. No known issues

Icon Fonts are Awesome Because you can easily change the size Because you can easily change the color Because you can easily shadow their shape Because they can have transparent knockouts, which work in IE6 unlike alpha transparent pngs. Because you can do all the other stuff image based icons can do, like change opacity or rotate or whatever. You'll be able to do things like add strokes to them with text-stroke or add gradients/textures with background-clip: text; once browser support is a bit deeper. Make SVG Responsive Cet article est également disponible en français For an image format that features infinite scalability, SVG can be a surprisingly difficult format to make responsive: vector images do not adjust themselves to the size of the viewport by default. Make A Responsive SVG Image As an image, you can make a SVG vector illustration scale with the page content as you would any other: While this works in many cases, sometimes it isn’t enough, especially if you’re trying to embed the SVG illustration via an <object> tag or entering the code directly into the page. In that case, simply modifying the width and height of the element won’t work.

Create A Responsive Imagemap With SVG While traditional imagemaps remain a very effective UI pattern for certain sites – especially those that need a visitor to enter a geographical location, or used in navigation that has a particularly strong visual theme – they bring with them two significant disadvantages that make them ill-suited for modern web development: Imagemap hotspots can take a long time to plot out, and are difficult to modify once created. Traditional imagemaps cannot be made responsive; while the image can be rescaled, the imagemap coordinates will not, meaning that hotspots will drift out of registration with the underlying image as the picture is resized. I’ve shown how to recreate simple imagemaps with SVG shapes, but that version did not incorporate bitmaps. As we’ll see, it’s entirely possible to integrate the two formats together. SVG is generally understood as its acronym: Scalable Vector Graphics.

The Perfect 3 Column Liquid Layout: No CSS hacks. SEO friendly. iPhone compatible. Download this layout (25kb zip file). Percentage dimensions of the holy grail layout All the dimensions are in percentage widths so the layout adjusts to any screen resolution. Vertical dimensions are not set so they stretch to the height of the content. Maximum column content widths Creating an image map from SVG I was asked how I made the map in my examples earlier. I wrote a small script to do it. (The script is quite limited – I only made it complete enough to handle the SVG files I was using. untitled Disclaimer: "PMI®", "PMBOK®", "PMP®", "PMI-RMP®", "CAPM®" and "PMI-ACP®" are registered marks of the Project Management Institute, Inc. The Swirl logoTM is a trade mark of AXELOS Limited. ITIL® is a registered trade mark of AXELOS Limited. PRINCE2® is a Registered Trade Mark of AXELOS Limited. MSP® is a Registered Trade Mark of AXELOS Limited Certified ScrumMaster® (CSM) and Certified Scrum Trainer® (CST) are registered trade marks of SCRUM ALLIANCE®

Differences Between CSS2.1 and CSS3+ Most of us know that with the introduction of what we customarily call “CSS3″1, there have been changes and additions to CSS, compared to what we had in CSS2.1. Putting all cross-browser issues aside, I thought it would be nice to be able to document all these changes into a single post and keep it up to date. So if you want a list of everything that’s been introduced into the CSS spec since CSS2.1, here it is. New Properties CSS Font-Size: em vs. px vs. pt vs. percent / Kyle Schaeffer One of the most confusing aspects of CSS styling is the application of the font-size attribute for text scaling. In CSS, you’re given four different units by which you can measure the size of text as it’s displayed in the web browser. Which of these four units is best suited for the web? It’s a question that’s spawned a diverse variety of debate and criticism. Finding a definitive answer can be difficult, most likely because the question, itself, is so difficult to answer.

Gary Turner web development Developers who are new to css, or those who work primarily in IE, run into a vicious “bug” in Firefox and other modern browsers. Their backgrounds disappear, or their borders do—but everything's fine in IE. The gnashing of teeth is heard throughout the land. The truth is, there's a reason for the behavior, and IE has screwed up again. The culprit is a wad bug known as hasLayout. I won't discuss it except in passing.