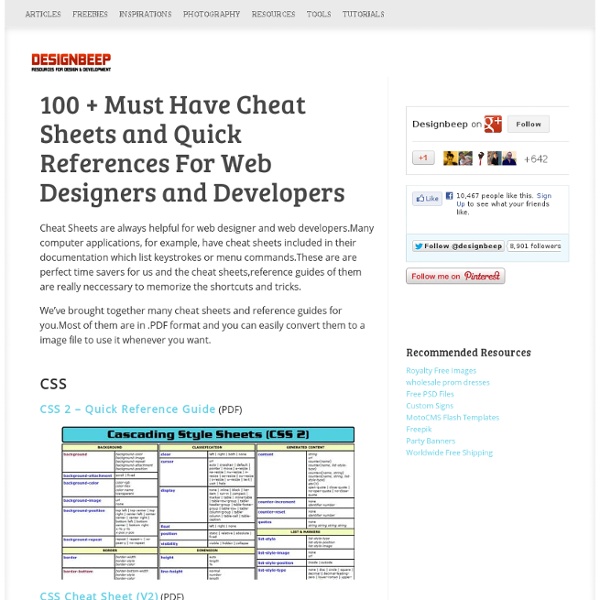 Designbeep is a design blog dedicated to web developers,bloggers,designers and freelancers.Our aim is to share everything about web design,graphic design,tutorials and inspirational articles and more. Homepage»RESOURCES »100 + Must Have Cheat Sheets and Quick References For Web Designers and Developers Wow, this is going to help out alot! Thanks! Related:  Reference

Mini guide de saisie .htaccess Files for the Rest of Us .htaccess files are used to configure Apache, as well a range of other web servers. Despite the .htaccess file type extension, they are simply text files that can be edited using any text-editor. In this article, we'll review what they are, and how you can use them in your projects. Please note that .htaccess files don't work on Windows-based systems, although they can be edited and uploaded to a compatible web server, and on Linux-based systems they are hidden by default. In order to work with htaccess files locally, to see how they work and generally play around with them, we can use XAMPP (or MAMP) on the Mac - a package that installs and configures Apache, PHP and MySQL. A .htaccess file follows the same format as Apache’s main configuration file: httpd.conf. A setting configured in an .htaccess file will override the same setting in the main configuration file for the directory which contains the file, as well as all of its subdirectories. A rewrite rule can be as simple as this:

Oddity Central - Weird Places, Odd Events, Bizarre News, Strange People and A Lot More Dark Roasted Blend "QUANTUM SHOT" #531Link - by Avi Abrams Army of tiny robots grows in number and sophistication Since our last "Robot Art" overview came out, these cute little bots multiplied like rabbits or Google spiders, and they all look good, so it's time for an update! (image courtesy Mike Rivamonte) Most of these robot figures (often called "nerdbots") are made from found objects, purely for your esthetic appreciation - and yet one can't shake the feeling that they might one day come to life (as if in some Stephen King story) and invade your cubicle, making shrill R2D2 sounds and mounting attacks on, say, a hated monstrous copy machine in the corner. Mike Rivamonte's metal sculptures are "interpretation of robots and spacemen capable of flight and mischief. The detailing on these robots is exceptional: (images courtesy Mike Rivamonte) Recent updates from Nemo Gould are quite surreal: Nicholas and Angela from "Nerdbots" site build the said "bots" out of scraps of... pretty much anything vintage and cool: