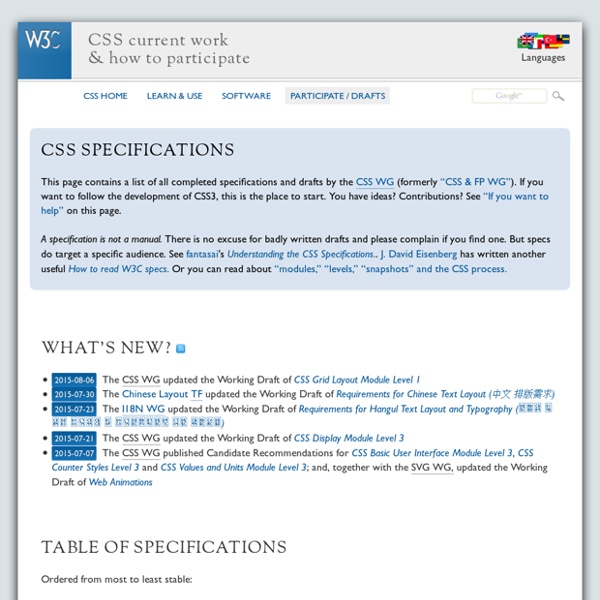 Ex­pla­na­tion of col­ors & status codes W3C indicates the maturity of specifications by a status code. The CSS working group uses the following, from least to most stable: The names are defined in sections 7.3 and 7.4 of the W3C process document. The informal stability levels used to group the specs are defined in this 2007 description of CSS stability levels. If you want to help Everybody can take part in the discussions on the archived mailing list www-style@w3.org. On the mailing list, you will be talking to many people, many very busy people. If you are sending comments on a specific CSS module, please prefix the subject of your message with the appropriate spec code (given in the “Status of this document” section) in brackets, e.g. Laurens Holst (a.k.a. If you work for a W3C member organization, you can also join the CSS working group and see drafts before they are published. About the test suites The test suites have their own archived mailing list public-css-testsuite@w3.org.

css Zen Garden: The Beauty in CSS Design Comparison of layout engines (Cascading Style Sheets) The following tables compare CSS compatibility and support for a number of layout engines. Please see the individual products' articles for further information. Unless otherwise specified in footnotes, comparisons are based on the stable versions without any add-ons, extensions or external programs. Explanation of the tables[edit] Engine nomenclature[edit] Rather than the names of web browsers and HTML to PDF converters, the names of the underlying engines are used. Values[edit] Values indicate the level of support in the most recent version of the layout engine, or (if a version number is given) in the specified version. ! @import — Whilst Gecko, WebKit and iCab download all media stylesheets immediately, Opera only downloads handheld, print, projection and screen media, as well as speech if "voice" feature is enabled and TV, on TV devices. :read-only and :read-write — Both Presto and KHTML handle the case of the contenteditable attribute incorrectly.

/* Position Is Everything */ — Modern browser bugs explained in CSS support chart This page lists supported CSS selectors , properties , @-rules , Media queries and values in alphabetical order. The "supported since" column indicates the Gecko version number in which support was introduced; versions prior to Gecko 1.0 are listed as 1.0. Gecko is the rendering engine used in Firefox and other applications; please see Gecko for more information about Firefox and Gecko version numbers. The "specification" column links to one of the specifications in which the feature was first specified. However, in many cases, the feature in also specified, and extended, in newer specifications. Mozilla CSS extensions (those prefixed with -moz- ) are mentioned in the "Notes" column to provide bug numbers and other hints regarding CSS support. Warning: Various specifications are still Working Drafts and several properties can be deleted, changed or renamed. If you think you have found a bug in Mozilla's CSS support, please create a minimal test case and file a bug . Selectors Properties

Safari CSS Reference: Introduction to Safari CSS Reference You can use Cascading Style Sheets (CSS) in conjunction with HTML-based web content to fine-tune the style of the content. The goal of CSS is to separate the structure provided by HTML from the style provided by CSS. Taking style information out of the structure allows designers to independently tune a page’s style for a variety of audiences and readers (such as desktops, hand-held devices like iPhone, and text-based browsers). All Safari web browsers use the WebKit engine to display webpages. WebKit is an open source framework in Mac OS X that lets developers embed web browser functionality into applications. This document is not intended as a comprehensive specification. You should read this document if you are creating web content for any version of Safari or any other WebKit-based application such as Dashboard. Organization of This Document This document contains the following articles: “Explanation of Terms” explains terminology used in this reference. See Also