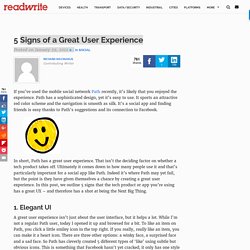 Path has a sophisticated design, yet it’s easy to use. It sports an attractive red color scheme and the navigation is smooth as silk. It’s a social app and finding friends is easy thanks to Path’s suggestions and its connection to Facebook. In short, Path has a great user experience. That isn’t the deciding factor on whether a tech product takes off. 1. A great user experience isn’t just about the user interface, but it helps a lot. 2. A nice design is one thing, but you also need to see value in it. 3. The Kindle Fire as a product is not as aesthetically pleasing as the iPad 2. Note that the rest of the Kindle Fire’s user experience is not always pleasurable. 4. With so many Internet-connected devices and screens nowadays, it’s important to have a consistent experience. 5.

Arguably the most outstanding tech products are ones that revolutionize the way we do things. Affordances. The concept of an affordance was coined by the perceptual psychologist James J. 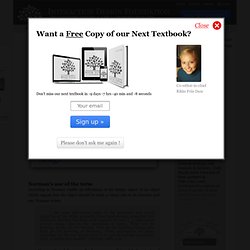 Gibson in his seminal book The Ecological Approach to Visual Perception. The concept was introduced to the HCI community by Donald Norman in his book The Psychology of Everyday Things from 1988. There has however been ambiguity in Norman's use of the concept, and the concept thus requires a more elaborate explanation. Norman's use of the term According to Norman (1988) an affordance is the design aspect of an object which suggest how the object should be used; a visual clue to its function and use. "...the term affordance refers to the perceived and actual properties of the thing, primarily those fundamental properties that determine just how the thing could possibly be used. [...]

Norman thus defines an affordance as something of both actual and perceived properties. Gibson's use of the term An affordance according to Gibson exists relative to the action capabilities of particular actors. Open Access License. Contents. Data collection for usability research. Taking notes in usability tests Anyone who has ever conducted a usability evaluation of a web site, software application, or consumer product, knows that human behaviour research often produces reams of data that can take significant time to analyse. 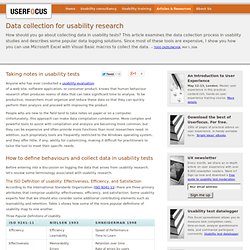 To be productive, researchers must organize and reduce these data so that they can quickly perform their analysis and proceed with improving the product. People who are new to the field tend to take notes on paper or on a computer. Unfortunately, this approach can make data compilation cumbersome. More complex and powerful tools to assist with compilation and analysis are becoming more common, but they can be expensive and often provide more functions than most researchers need. How to define behaviours and collect data in usability tests Before entering into a discussion on logging the data that arises from usability research, let's review some terminology associated with usability research. 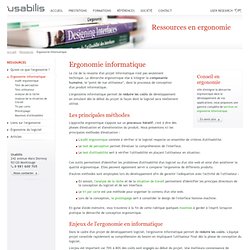 IHM. Responsive web design. Smashing Magazine. Steve Krug on DIY usability testing. Usability 101: Definition and Fundamentals - What, Why, How. Widgets. “You are Here” indicator a way of indicating the current location (or view area) when looking at an overview map, site map, navigation bar, etc.

The indicator can be as simple as a dot, a bounding rectangle, an arrow, or a hilited item. “You… Read more » about box A dialog box that describes the software product as a whole and the company that created it. Read more » accumulating attribute group a set of items or properties that are related and whose effect is cumulative, as with a group of checkboxes. Read more » adaptive menu a menu where the most recently-selected item(s) are shown at the top so as to help the user repeat common commands quickly without searching for them in long menus. Read more » adaptive palette a tool palette or toolbar that allows tools to be selected from a pop-up menu, and then shows the chosen tool as the default tool for that menu (can be selected again just by clicking, without the menu appearing).