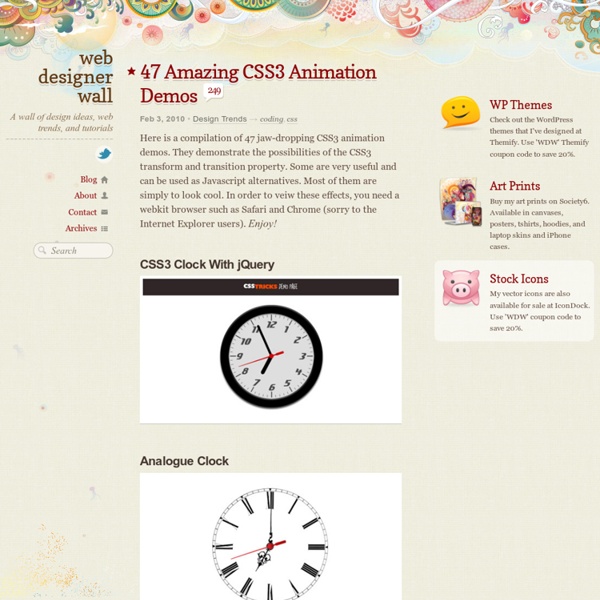 CSS Animations Abstract This CSS module describes a way for authors to animate the values of CSS properties over time, using keyframes. The behavior of these keyframe animations can be controlled by specifying their duration, number of repeats, and repeating behavior. Status of this document This section describes the status of this document at the time of its publication. Other documents may supersede this document. Responsive Web Design The English architect Christopher Wren once quipped that his chosen field “aims for Eternity,” and there’s something appealing about that formula: Unlike the web, which often feels like aiming for next week, architecture is a discipline very much defined by its permanence. Article Continues Below A building’s foundation defines its footprint, which defines its frame, which shapes the facade. Each phase of the architectural process is more immutable, more unchanging than the last. Creative decisions quite literally shape a physical space, defining the way in which people move through its confines for decades or even centuries. Working on the web, however, is a wholly different matter.

Pure CSS drawings, 50 examples As Wikipedia says, Cascading Style Sheets (CSS) is a style sheet language used to describe the presentation semantics (that is, the look and formatting) of a document written in a markup language. Its most common application is to style web pages written in HTML and XHTML, but the language can also be applied to any kind of XML document, including SVG and XUL. But beyond the web design, you can use CSS to create some pretty cool graphics, as the ones we show you below. 1. 3D CSS Puzzle by Stu Nicholls This puzzle was made completely with CSS, must have taken a lot of time. 2.

10 Amazing Examples of Innovative CSS3 Animation CSS3 has brought about a number of aesthetically impressive new features. Perhaps the most fun of these to play with is CSS animation, which allows you to perform many motion-based functions normally delegated to JavaScript. Join me on my epic quest to discover the coolest, most innovative, and more importantly, nerdiest use of CSS animation on the web.

50 jQuery Function Demos for Aspiring Web Developers - Smashing Coding Every aspiring Web developer should know about the power of JavaScript and how it can be used to enhance the ways in which people see and interact with Web pages. Fortunately, to help us be more productive, we can use the power of JavaScript libraries, and in this article we will take a good look at jQuery in action. What Is jQuery?

animations · css {{{Editorial notes}}} In this section See also Related articles Animation Sketch in 60 Seconds: Create a Frosted Background Effect It’s time to learn something super-quick in Sketch; a frosted background effect. So without further ado, let’s jump in! Start by placing an image on your Sketch artboard, then cover it with a simple rectangle shape. 13 Excellent Tools and Systems for CSS Grid Based Layouts A good grid can be a strong foundation for any design. Using grids got its start in print design, but has made it’s way over to the web. There are several advantages to using grids in web design, but primarily they help achieve structure and consistency in layouts. If you have yet to start using grids in your web design projects, but want to get started…we’re here to help.

Get started with CSS animation Knowledge needed: Basic HTML and CSS Requires: HTML/CSS editor, modern browser Project Time: 1-2 hours Support file "Animating" with CSS used to be limited to hovering effects. With :hover and :focus pseudo classes we've been able to change color, size, background-color, position, and many other CSS properties based on user action. The :hover trick provides only two states - hovered and non-hovered - with only two keyframes: start and end, and no tweening between these states, creating a harsh and sudden transition.

Percentage Loader run loaderor download on BitBucket jQuery.PercentageLoader is a jQuery plugin for displaying a progress widget in more visually striking way than the ubiquitous horizontal progress bar / textual counter. Installation and use is quick and simple. CSS3 Animations I recently wrote about CSS3 Transitions and the next step for that is sort of CSS Transitions on steroids: CSS3 Animations (CSS Animations Module Level 3 specification). What are CSS Animations? CSS Animations offers a more detailed way to control animations, the number of times it should iterate and property values at certain keyframes. A simple example Let’s take a look at the code for a simple CSS3 Animations example: 01..animation-container {

30 Simple Titles by JoelStarling 30 Simple Titles (Version 04) 30 Unique Original Titles & Lower Thirds 540p, 720p, 1080p (1920×1080), 2K and 4K (3840×2160) resolutionsEasily to customize with the Title Controller : Zoom, Color, Background ON/OFF, Shadow and Duration Control. Duration Controller Universal Expressions All scenes have different animations 16:9 Square Pixels Compatible with After Effects CS5, CS5.5, CS6 and CC Video tutorial included (HD) Easy to customize project Well organized Very Fast Render No plug-ins required Links to download the font included in the package Music Inspiration, not included in project. CSS Tools: Reset CSS The goal of a reset stylesheet is to reduce browser inconsistencies in things like default line heights, margins and font sizes of headings, and so on. The general reasoning behind this was discussed in a May 2007 post, if you're interested. Reset styles quite often appear in CSS frameworks, and the original "meyerweb reset" found its way into Blueprint, among others. The reset styles given here are intentionally very generic. There isn't any default color or background set for the body element, for example.