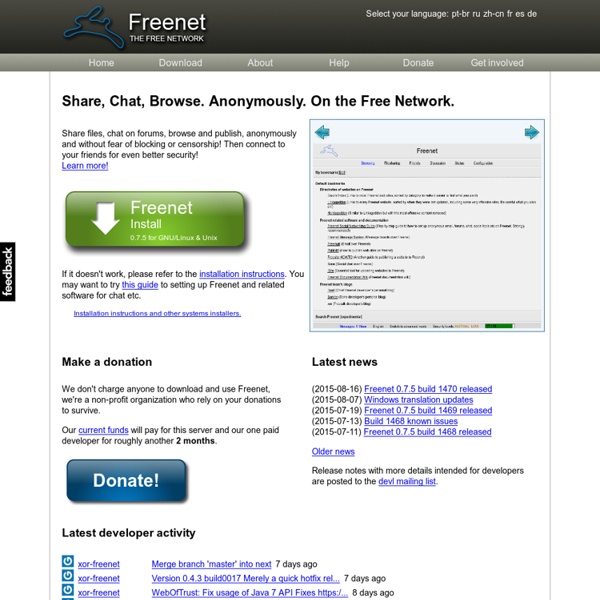 Share files, chat on forums, browse and publish, anonymously and without fear of blocking or censorship! Then connect to your friends for even better security! Learn more! We were unable to detect your Operating System. Please turn on javascript, or go to the download page to install Freenet. Installation instructions and other systems installers. Make a donation We don't charge anyone to download and use Freenet, we're a non-profit organization who rely on your donations to survive. Our current balance is $40773.39. Donate! Latest developer activity

Silk Road (anonymous marketplace) For the historical trade routes, see Silk Road. In 2013, the Federal Bureau of Investigation (FBI) shut down the website[12] and arrested Ross William Ulbricht under charges of being the site's pseudonymous founder "Dread Pirate Roberts".[4] On 6 November 2013, Silk Road 2.0 came online, run by former administrators of Silk Road.[13] It too was shut down and the alleged operator was arrested on 6 November 2014 as part of the so-called "Operation Onymous”. Ulbricht was convicted of all seven charges in U.S. Federal Court in Manhattan relating to Silk Road and was sentenced to life in prison.[14] Further charges alleging murder-for-hire remain pending in Maryland.[2][15][16] Silk Road was founded in February 2011.[17] The name "Silk Road" comes from a historical network of trade routes, started during the Han Dynasty (206 BC – 220 AD), between Europe, India, China, and many other countries on the Afro-Eurasian landmass.

PET - CyberWiki Thanks for visiting the CIS PET wiki. This is meant to be a list of free technologies aimed at empowering Internet users to gain better control over their data. It's very simple to add an entry---just click the "edit" tab, copy and paste the previous entry, and substitute the name, description, and address. Abine - A Firefox / Internet Explorer plugin that blocks third party advertising networks, manages HTTP, DOM, and Flash cookies, and securely manages site logins. Currently in private beta, but invites aren't hard to get. Abine Privacy SuiteAd Blockers for Browsers - Firefox: Adblock Plus Chrome: AdBlock Safari: AdBlock Anon email services - Send anonymous email awxcnx.de Email drop drop.ioAnonymouse - A Web search portal hosted on an island off the coast of Somalia.

Cross-browser fingerprinting test 2.0 While we browse the web, most web pages have an interest in observing our behaviour in order to achieve certain business benefits. Read more » For example, they would like to know what kind of content the visitor is interested in, and, more specifically, what to recommend to a user who has already downloaded certain page(s) (e.g. article(s)). Therefore, vaguely knowing users’ areas of interest is often insufficient; most web pages will be interested in the entire course of a visit, and, in the case of returning visitors, they want to know the whole browsing history, too. In order to pull this off, the web server needs to store a personal 'file' about each user, and must be able to identify returning visitors.However, there are certain technical restrictions to such activities, and therefore newer and newer techniques are invented to identify and profile users. For some of these – such as web bugs – it is indispensable to store an identifier on the user’s computer.

REVEALED: Hundreds of words to avoid using online if you don't want the government spying on you Department of Homeland Security forced to release list following freedom of information requestAgency insists it only looks for evidence of genuine threats to the U.S. and not for signs of general dissent By Daniel Miller Published: 09:32 GMT, 26 May 2012 | Updated: 17:46 GMT, 26 May 2012 Revealing: A list of keywords used by government analysts to scour the internet for evidence of threats to the U.S. was released under the Freedom of Information Act John the Ripper password cracker John the Ripper is free and Open Source software, distributed primarily in source code form. If you would rather use a commercial product tailored for your specific operating system, please consider John the Ripper Pro, which is distributed primarily in the form of "native" packages for the target operating systems and in general is meant to be easier to install and use while delivering optimal performance. This version integrates lots of contributed patches adding GPU support (OpenCL and CUDA), support for a hundred of additional hash and cipher types (including popular ones such as NTLM, raw MD5, etc., and even things such as encrypted OpenSSH private keys, ZIP and RAR archives, PDF files, etc.), as well as some optimizations and features. Unfortunately, its overall quality is lower than the official version's. Requires OpenSSL. There are unofficial binary builds (by John the Ripper user community members) for Windows, Linux, Solaris, and Mac OS X.

Anonymouse.org AnonWWW Many mice surf the web under the illusion that their actions are private and anonymous. Unfortunately, this is not the way it is. Every time you visit a site for a piece of cheese, you leave a calling card that reveals where you are coming from, what kind of computer you use, and other details. And many cats keep logs of all your visits, so that they can catch you!This service allows you to surf the web without revealing any personal information.It is fast, it is easy, and it is free!

How to Hide Data in Image, Audio & Video Files: Steganography Ever wondered to know how to hide secret data in image, audio and video files? Well, in this post I will take you through a concept called steganography using which, it is possible to hide your secret information in image files, songs or any other file of your choice. At the end of this post, you can also download free stegnographic tools and start hiding your data. What is Steganography? Steganography is a means of obscuring data where secret messages are hidden inside computer files such as images, sound files, videos and even executable files so that, no one except the sender and the receiver will suspect the existence of stealth information in it.

How to Detect Apps Leaking Your Data One reason that smartphones and smartphone apps are so useful is that they can integrate intimately with our personal lives. But that also puts our personal data at risk. A new service called Mobilescope hopes to change that by letting a smartphone user examine all the data that apps transfer, and alerting him when sensitive information, such as his name or e-mail address, is transferred. “It’s a platform-agnostic interception tool that you can use on your Android, iOS, Blackberry, or Windows device,” says Ashkan Soltani, an independent privacy researcher who created Mobilescope with fellow researchers David Campbell and Aldo Cortesi. Their first proof-of-concept won a prize for the best app created during a privacy-focused programming contest, or codeathon, organized by the Wall Street Journal in April this year; the trio has now polished it enough to open a beta trial period. “Our focus is making really simple the process of interception,” says Soltani.

Running Mantra and Firefox together Where ever we go, we always used to hear some people saying that it could have been great if it is possible to run OWASP Mantra and Firefox together. Today, we will be discussing how you can make it possible by a simple trick. Step 1 ------------ Go to the OWASP Mantra folder where you extracted files into. Step 2 ------------ links This is an old revision of the document! This page will continue to be expanded to include a variety of reference material. Wireless Basics and Tutorials 802.11 Attacks by Brad Antoniewicz of Foundstone/McAfee. Provides a step by step walkthrough of popular wireless attacks.Management Frames This is a really excellent one-page overview of management frames and error messages. Technique Papers

How to Completely Anonymize Using Anomos How to Completely Mask & Anonymize Your BitTorrent Traffic Using Anomos A couple times a year, I hear about someone I know receiving that oh-so-scary letter from their ISP telling them to stop torrenting. ISPs will go as far as throttling your bandwidth (without lowering your bill), and sometimes even reporting you to authorities.